Lovers should seek out Joshua Tree for their next tryst, claims Ariana Grande’s music video. Her 2016 Grammy-nominated video for “Into You” traces a pop star’s illicit liaison with her bodyguard. They ride a motorcycle to a 1950s-style motel with joshua trees dotting the background, and Grande throws away her fame and celebrity boyfriend for a weekend of anonymity in the Mojave Desert.

Grande’s video is only one in a slew of recent music videos featuring women with the joshua tree (Yucca brevifolia). The instagrammable plant is instantly recognizable in the background of new music videos today, but it is more than just a backdrop to a newly released song. It’s a dreamscape where women can become what they’ve imagined.

The joshua tree and its eponymous town and National Park have long been a place of musical pilgrimage. Hippies of a certain age have told me about when they dropped acid in the park, following in the footsteps of Jim Morrison and his perambulations in his never-completed film “HWY: An American Pastoral.” Others venture to the park to visit cosmic American music founder Gram Parson’s cremation site. Some even venture to Joshua Tree to find the tree from the cover of the U2 album, though true fans would know that the album cover was photographed farther north, near Darwin, CA.

The joshua tree is an indicator species, a kind of ecological locator. Its habitat, the Mojave Desert, spans southeastern California to southwestern Utah. Most joshua trees occur outside the National Park, although the park and neighboring communities benefit from the tourism economy generated by the association.

The charismatic flora fascinates visitors and residents alike. They tell you: the joshua tree is not actually a tree; it’s a yucca, which makes it more closely related to asparagus than oak. This makes it confusing for scientists trying to age joshua trees without tree rings; they just say that some of the largest specimens are more than 800 years old. They’ve also received considerable attention for their potential endangerment: the southernmost trees in the park are threatened by climate change, because trees can’t move to higher latitude or elevations like animals can.

Before the Instagram era, the yucca was simply a backdrop to music videos. Tejana singer Selena incidentally featured joshua trees in “Amor Prohibido” (1994), which focused more on standalone doorframes and curtains than on the yucca. Destiny’s Child hides joshua trees behind mirrors, glass, and dancing in “Cater 2 U” (2004).

Even when the yucca seemed to play a more prominent role in videos, they only set the scene of a generic Wild West. Missy Elliot’s “Lose Control” (2005) features a dance line in front of the yuccas right after a scene in front of an old Western set. Muse’s “Knights of Cydonia” (2007) takes Western noir and combines it with a space-age future, complete with ray-guns, holograms, and karate.

In these music videos, the joshua tree is convenient, but not essential. The joshua tree merely suggests a location rather than specifying one, in the way that many music videos are set in anonymous clubs. Because song lyrics rarely specify a filming location, settings are part convenience and part caprice — the Mojave was simply benefiting from its relative proximity to Los Angeles.

Then came “Telephone” (2009), Lady Gaga and Beyoncé’s nine-minute epic that collides high fashion and desert Americana. “Telephone” is not a music video as much as it is a short film, a Tarantino-inspired exploitation flick. The music video is sheathed in bright colors and couture, following in style and plot from Gaga’s “Paparazzi” (2008). The first half of the video shows Gaga in prison, dancing in leather with inmates before she is released. She drives off with Beyoncé — playing a character named Honey Bee in deference to Pulp Fiction’s Honey Bunny — in the “pussy wagon” from Kill Bill, Vol. I. They drive through the Mojave to a desert diner where they meet up with Beyoncé’s lover. Honey Bee and Gaga kill him and all of the other diner patrons.

After a dance break in the diner — complete with American-flag outfits — Gaga and Honey Bee drive off into the sunset, joshua trees flanking both sides. Their outsized couture complements the strange proportions of the yuccas. They drive faster as a police chase ensues, evoking Thelma & Louise, and a large “to be continued” pops up on the screen.

In this video, joshua trees become their own character, their role to remind watcher of the Mojave backdrop. It signifies the fact that these women are in few remaining outlaw spaces of the American West.

Soon after “Telephone,” Ke$ha’s psychedelic “Your Love is My Drug” (2010) starts in a joshua tree woodland that substitutes for an African savanna. The video quickly becomes a desert trip, complete with vivid Yellow-Submarine animations and a stylized interpretation of free love.

Pop isn’t the only genre that took on joshua trees as suggestive feminist flora. Kacey Musgraves’ country crossover hit “Follow Your Arrow” (2013) features the singer in a red-white-and-blue cowgirl outfit while singing a progressive social message. She’s encouraging her (presumably female) watchers to “kiss lots of boys/or kiss lots of girls/if that’s something you’re into.” She dances, blows kisses, and nods knowingly while the yuccas signal her free-spirited quirkiness.

Elle King’s “Ex’s and Oh’s” (2015) also touts progressive social values. Her video features sexualized men in American-flag suspenders and short-shorts, vying for her attention and love. Her husky contralto, recalling 1950s blues, reverses the objectification of women common in so many music videos while maintaining an Americana aesthetic.

Like a dream sequence in a movie musical, music videos begin with an assumption of departure from everyday life, scholar Carol Vernallis says. In an influential 1984 article, Marsha Kinder argues that music videos should be interpreted like dreams: both are associative jumbles of images that reveal underlying desires. A video’s plot and aesthetic can express the artist’s vision or desires (to dispatch their boyfriend or have a steamy affair). Artists hope that you find these dreams compelling enough to watch and rewatch them. After all, music videos are marketing tools for their brand.

Artists want you to buy their dreams: to rewatch a video and internalize its message. These videos advertise a feminist message with a joshua-tree-laden aesthetic. You can have sexual freedom, Ariana Grande and Ke$ha offer, if you spend time in the Mojave. King, Gaga, and Beyonce allow you to dream to destroy men, and look good while doing it. And Musgraves provides the sickly-sweet complement to all of these messages: in the Mojave, you can be who you are on Instagram.

The association between becoming the woman you always wanted to be and the joshua tree is not coincidental: Kesha’s new album Rainbow is apparently inspired by an experience she had with a UFO while in Joshua Tree National Park. For Kesha and all of these women, the joshua tree woodland has become their manic pixie dreamgirl equivalent: instead of a woman helping a man become who he really is, women get a landscape that allows them to become who they are. The manic pixie dreamscape is the perfect place for starlets to represent their Insta-feminist dreams in an alternate-reality version of America. That is, the Mojave has become a recognizable location of what celebrities imagine feminism to be.

It’s not surprising that this incarnation of a feminist vision includes an instagrammable yucca: a brand needs a label, and an oddly branched yucca, seemingly in wilderness, does the trick. Instantly recognizable on social media, the joshua tree is part of a string of associations: Beyoncé, Musgraves, feminism, joshua trees, me.

The Instagram-ready tree extends its long arms to invite you to the desert. As many seek to curate freer lives on the road, the Mojave provides an opportunity to post photos where you fulfill your feminist dreams.

Muse. “Knights of Cydonia.”
Queens of the Stone Age. “Make it Wit Chu.” 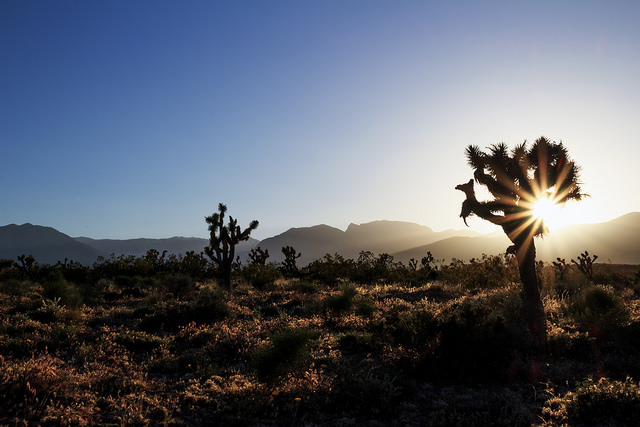