I visit my daughter, Jasmine, in Dublin. She moved there almost a year ago, and since then I have flown across the seas several times to spend time with her. A lot of people back in Israel, where I live, raise eyebrows when I tell them where Jasmine now resides.

“Aren’t the Irish anti-Semitic?” they ask as if they already know the answer and are just looking for affirmation. “You should be careful,” they continue, and I wonder how exactly I should be careful and what on earth might happen if I blow my cover while shopping at Tesco’s and some innocent bystander in the frozen food section realizes there is an actual Jew in their midst.

It’s true I do not walk around wrapped in an Israeli flag; nor do I wear a big Star of David, or even a small one, around my neck. I moved to Israel from the UK as a teenager, sent by my parents, loathe to leave my British roots behind. I had zero awareness of Zionism at the time and zero awareness of Middle East politics. I’m savvier today.

On the other hand, I’ve never made a secret of the fact that I am Jewish and live in Israel. Which fact is more incriminating? My ethnicity or my nationality? According to some folks back home in Israel, both are equally damning in the Diaspora, particularly in Ireland, a country that has had its own fair share of bitter conflict.

As a country that for many years fought for liberation from foreign rule, the Irish identify more naturally with the Palestinians. Dublin’s Lord Mayor Mícheál Mac Donncha attended a conference in the Palestinian town of Ramallah in the West Bank in which a prominent banner with an image of Hajj Amin al-Husseini, the pro-Nazi Palestinian mufti from the 1930s and 1940s, was displayed. The Irish-Jewish community, not to mention the Israeli government, was furious at this, despite Mac Donncha’s protestations to the contrary. Last year the Irish government pledged an additional one million Euro in aid for Palestinian refugees. Furthermore, the Irish Parliament’s constant call for an extensive boycott of Israeli settlements has touched a raw nerve in the Israeli psyche.  In January, Prime Minister Benjamin Netanyahu’s office released the following statement: “Israel is outraged over the legislation against it in the Dail which is indicative of hypocrisy and anti-Semitism.” Ouch. Nothing could express better the divergence of perception between these two nations.

Traveling to Ireland from Israel necessitates plane rides: there are no direct flights, save for a couple of months in the summer when probably the worst airline I have ever had the misfortune to travel with, Arkia, runs a weekly service. So I travel with Turkish Airlines, via Istanbul — another excuse for some Israelis to raise their eyebrows. “Isn’t it dangerous to stop over in Turkey?” they ask as if, once again, they already know the answer. The entire Turkish nation hates us, I am told by many. Israel as a nation surrounded by hostile elements has become a cliché of sorts. Keep looking over your shoulder at Atatürk Airport and pray you make it back safely to the Holy Land.

Israelis are not the only ones to question safety in the unknown. “Isn’t it dangerous in Israel?” a cab driver asks me one rainy afternoon, stuck in Dublin traffic en route to my daughter’s house. I look out at the rain thrashing down onto the sidewalk, the people rushing along, heads down, battling the elements, and I ask him where he was born. Iran, he says, glancing at me in the mirror, his eyes twinkling, and we both laugh.

And then I chanced upon a jewelry store close to my daughter’s apartment that specializes in the repair and renovation of watches and jewelry. I wandered past it a few times to and from a local café, where I like to sit and write. The figure of a dog lay in the front window of the jewelry store, its little legs stretched out. At first, I thought it was a stuffed animal, complete with button eyes, but then it raised its head and wagged its tail. Appearances can be deceptive.

On impulse, I walked into the shop. A bell tinkled pleasantly as I opened the door. A soft-spoken Irish gentleman with blue eyes and a shock of white hair examined the ring through a magnifying glass, turned it over a few times in the palm of his hand, and asked me to come back tomorrow, when his grandson would be able to give me a quote for securing the diamond in place. A family-run business.

I dutifully returned the next day. The old gentleman was there, and also his daughter and grandson. The magnifying glass was pulled out again, the grandson turned the ring over and over in the palm of his hand. They would reconstruct the prongs for me.

We chatted, the mother leaning over the glass-topped counter, one manicured hand propped under her chin, the other hand holding my ring. She looked surprised when I mentioned I live in Israel. “Really?” she said. “You don’t look Jewish.”  My turn to be surprised. “What does a Jewish person look like?” I asked her, genuinely interested. (Subtext in my head: Big nose? Olive skin?) “Oh, you know,” she said, vaguely gesturing at the air. “Jewish people have a way about them. We used to get plenty of them in here, big spenders, you know what I mean.”

But I didn’t know and so I pondered her comment.  From time to time, I caught sight of my blurry image in shop windows and wondered how exactly I present to the world.

I also read historian Sharonna Pearl’s excellent essay “The Myth of the Jewish Nose” in The Tablet, in which she explains the following: “There is no such thing as a Jewish nose. There are Jews and they have noses, just like almost everyone else.” More importantly, she pushes home the idea that our identities are not defined by body and blood. I think about this too.

Before I left Dublin, I went back in to the shop to see how the repair job was going.The woman with the manicured nails beckoned to me enthusiastically. I was pleased at her warmth. I was even relieved. The ring would not be ready for another couple of weeks. As I left, the woman put her head to one side. “You know,” she said, “you really don’t look Jewish, more like Italian.” She held out her hand to me. “Yes, that’s it.” Perhaps I should have taken this as a compliment. For a minute, I wanted to laugh out loud.

Later that afternoon, I hug my daughter goodbye, get on a plane to Istanbul, and continue on to Tel Aviv. On the plane, I read an op-ed in the Turkish English-language daily, Daily Sabah, about the reemergence of antisemitism. According to the writer, Emre Gonen, a recent survey carried out by the European Union Agency for Fundamental Rights across 22 countries, with almost 16,500 respondents (all of whom identify as Jewish), hammers home the idea that antisemitism is on the rise worldwide.

I am seated on the plane next to a woman about my age. We chat together, two women who could be from anywhere. She is from Ramallah, a Palestinian who, like me, has been visiting one of her children abroad. It’s better for them, she tells me, to settle outside of Israel. I nod, I understand her perfectly. We chat for a while, the lights go out and she falls asleep comfortably beside me.

As the plane soars through the sky, I think back to that scene in the jewelry shop. I finger the space where my ring usually rests, a ring that belonged to my grandmother and my great-grandmother, a ring handed down from generation to generation in a Jewish family, a ring I never take off, not even in the shower. Now it lies in the studio at the back of a jewelry shop in a quiet neighborhood of Dublin, and I wonder again, here on the darkened plane, what a Jewish person looks like. 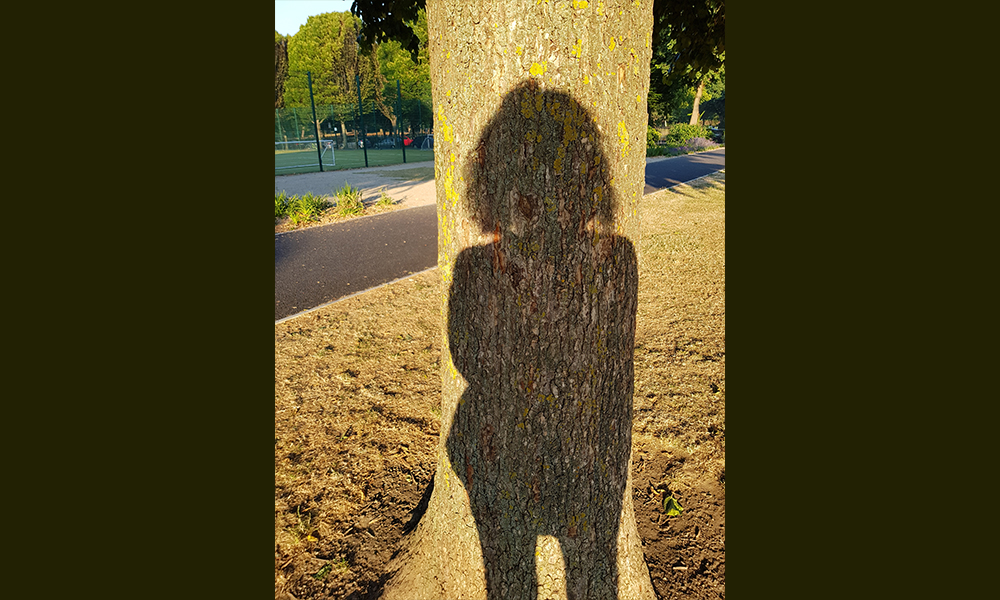