In April 2010, Elie Wiesel bought full-page ads in the New York Times, the Washington Post, the International Herald Tribune and the Wall Street Journal, and published an intense Jerusalem-manifesto; a public cry in defense of Jewish sovereignty over the city:

For me, as the Jew that I am, Jerusalem is above politics. It is mentioned more than six hundred times in Scripture –=— and not a single time in the Koran […] To many Jewish theologians, it IS Jewish history […]  It belongs to the Jewish people and is much more than a city, it is what binds one Jew to another in a way that remains hard to explain…Jerusalem is the heart of our heart, the soul of our soul.

Positive Jewish responses to Trump’s recent Jerusalem-decision were, for the most part, motivated by an attitude similar to Wiesel’s. Jerusalem, as the prevalent argument goes, is our “eternal capital.” Shmuel Rosner has written in this vein in the Times; and in last week’s German weekly Die Zeit, Zeruya Shalev, a well-known Israeli author, pointed out that Jerusalem was the Jews’ capital already “3000 years ago.” There was a Jewish king in Jerusalem, and a Temple, “hundreds of years before Mohammed, before the Kuran, before the Al-Aksa-Mosque was built.” Trump’s announcement thus established not just “historical,” but also “literary justice.”

These familiar clichés, mostly prevalent in post Six Day War authors, are simplistic and misleading, and in significant ways. For one thing, the heart of our heart is the Torah, and Jerusalem is not mentioned in it even once. Other municipal centers play in the book significant theological roles: Hebron is strongly associated with Abraham’s figure; Shchem, more familiar today as Nablus, functions as the Promised Land’s gate; and it is in Beit El that Jacob is renamed, very symbolically, as “Israel.” Clearly, Moses has never heard of Jerusalem, and Joseph never dreamt of it in his dreams. As the Torah’s literary theology unfolds, Jerusalem remains conspicuously absent.

When the city does gain prominence, its role emerges directly from the Israelites’ demand to become “like all the other nations” — to be ruled by an earthly political authority, rather than directly by God (1 Sam. 8:5). Samuel interprets this request as an idolatrous act of betrayal, and God unequivocally shares the same judgment. Comparing it to the Israelites’ “worshiping other Gods” and “forsaking” him in the desert, God explains to Samuel that the Israelites are  rebelling directly against the deity: “It is not you that they have rejected; it is Me that they have rejected as their king” (1 Sam. 8:7-8). Indeed, alongside the infamous incident with the Golden Calf, the Israelites’ request to be ruled “like the nations” has become one of the Bible’s prime examples of idolatry.

It is from this paradigmatic idolatrous moment that Jewish politics would be subsequently centralized in Jerusalem — a king’s earthly capital — and the city’s Temple would be built, consolidating its political-theological sway. These idolatrous origins have left on Jerusalem an enduring stain: an adequately Jewish relation to it can be at most one of ambivalent love, mixed with suspicion. Not one of enthusiastic identification.

The greatness of the Jewish prophets consists, among other things, in their thoroughgoing cultivation of ambivalence in relation to the city. Once Jerusalem is destroyed, they mourn it from exile; but they are never quite at home in the capital as long as it stands, knowing well that it is not truly the city of God, but an-all-too-human one of clergymen, politicians and kings.

In fact, if Jerusalem’s original sin was its creation through the Israelites’ wish to become “like the nations,” then the prophets’ enduring project can be seen as attempting to reverse Jerusalem’s inheritance, by establishing the Israelites as a model for the nations. This inversion is the key to the deep meaning behind Isaiah’s famous phrase, according to which the Israelites must become, through “righteousness,” a “light unto the nations” (Isa. 46:2). But it is not before the end of time and the Messiah’s arrival that the reversal of idolatry will be complete, and Jerusalem itself will finally become the nations’ universal model of justice and peace: “out of Zion shall go forth the law, and the word of the Lord from Jerusalem… and they shall beat their swords into plowshares, and their spears into pruninghooks: nation shall not lift up sword against nation, neither shall they learn war any more” (Isa. 2:3-4).

It is common to mention that for 2000 years, Jews have recited Psalms 137 in wedding ceremonies: “If I forget you Jerusalem, my right hand forget its skill, my tongue cleave to the roof of my mouth.” But this is misleading, because for 2000 years Jews have recited this while rejecting the establishment of Jewish sovereignty over Jerusalem as an abomination. Indeed Jewish law strictly prohibits Jewish rule over Jerusalem before the Messiah’s arrival and the fulfillment of Isaiah’s aforementioned prophecy. In this light, not just Trump’s recognition of Jerusalem as Israel’s capital — but also Ben Gurion’s declaration of Israel’s independence — stand in sharp contradiction to the Jewish religion.

The earlier Zionists, radical secular that they were, ignored this prohibition. For this reason, they also cared little about Jerusalem, viewing Zionism’s attempt to establish a Jewish nation state as a modern project — looking up to the Kibbutz, to Tel Aviv and to the flourishing of the Negev desert as their symbols; precisely not to the remains of the destroyed Jewish Temple. By contrast, religious Zionists forgot neither Jerusalem nor the prohibition on ruling it before the Messiah’s coming. Instead, they made it the foundation of their theology, and embraced Zionism’s idolatrous wish to establish a state in the holy land — be ruled “like the other nations” — as athalta d’geula, the beginning of the Messiah’s arrival.

This blend of idolatry and messianism has created the fundamentalism that’s now familiar from the settlers’ religious Zionist movement: their sanctification of the State of Israel, mixed with a pagan worship of land. Through this toxic combination, Jerusalem has indeed become a model, but one that is very far Isaiah’s ideas about justice and peace.

Unfortunately, this messianic idolatry is prevalent today also outside the circles of the settlers’ movement, or Netanyahu’s far-right government. Avi Gabbay, the current leader of Israel’s Labor Party and thus the alleged alternative to Netanyahu, embraced Trump’s announcement by stating: “a unified Jerusalem is more important than peace.” Just a week earlier, he had remarked that Israel’s left “has forgotten what it means to be Jewish.” Taken together, Gabbay’s statements are continuous with Wiesel’s idea that “Jerusalem is above politics” because it constitutes “the heart” of a Jewish “heart.” A pernicious form of idolatrous messianism is increasingly infecting Jewish consensus.

This was not always the case. As the Israeli critic Nissim Calderon recently pointed out to me, “anybody who knows anything about modern Hebrew literature should know that our best minds rejected Jerusalem as a symbol for the new and sovereign Jew. Agnon’s T’mol Shilshom, Brenner, Alterman — all of them wrote about Jerusalem with fear, with disgust, with refusal.” Indeed, they all related to the city, not unlike the prophets, with suspicion — or at most, as in the case of Agnon, with ambivalent love. Shalev, by contrast, sees in Trump’s recognition of Jerusalem as Israel’s capital as an expression of “literary justice,” and only wishes Obama had established it, not the “ridiculous, dangerous President.” Actually, if one can speak here of literary justice, then this is because a real-estate mogul sitting in the White House is promoting the vulgar turning of Jerusalem into a Golden Calf.

It isn’t Israel’s left that has forgotten what it means to be Jewish. Jerusalem has never been above politics, nor the heart of our hearts. It is also not the basis of Jewish thinking or literary significance. The narratives of the Torah, together with the prophets’ teaching of justice, constitute Judaism’s indispensible pillars. The tendency to replace them by a Jerusalem-idolatry was familiar from the start. 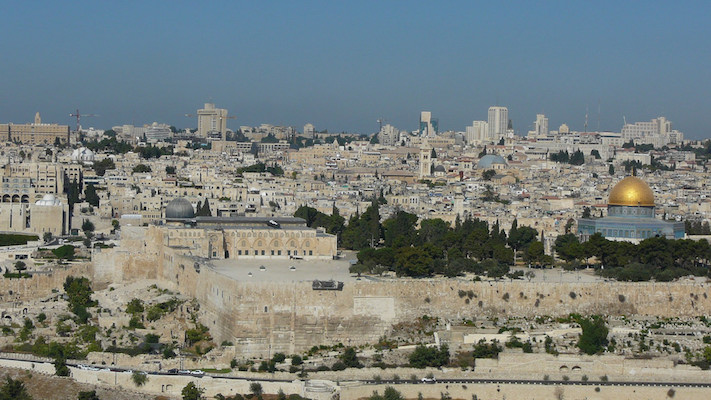