Jane Austen has recently replaced Darwin on the 10-pound note in England, largely because of the uproar over the scarcity of women represented on currency. It is fitting that the argument about what is known as “cultural capital,” the extent to which people, things, and ideas are valued within a society, should revolve around portraits that appear on money. The exclusion of women from currency sends the message that they are not treasured in the treasury, or elsewhere in English society. And the triumph of activism that got Austen her place tells of the continual fight for recognition of women’s contributions. But Darwin’s replacement also tells a different story about value, or more accurately values. Darwin and Austen each tell a distinctive story about what we think is noteworthy about being human.

You wouldn’t necessarily see Darwin and Austen as being on the same page, but actually, each was concerned with our profile as a species. In his Origin of Species, Darwin emphasizes the struggle for existence that involves all living beings, the survival of the fittest, which often involves violence. Nature is “red in tooth and claw” as his contemporary the poet Alfred Lord Tennyson wrote. Despite Darwin’s acknowledgement that bonds of care and mutual aid also help animals to survive, a position he emphasized in later writings, this is the popular view of his evolutionary theory. In this contest for survival, we are the champions.

Austen focuses on a different quality crucial to our survival, and to the survival of most mammals and birds: our ability to cooperate. For many creatures, cooperation depends largely on instinct-driven behavior. But for humans and a few other species, cooperation also relies on mindreading, on knowing what others want and need. Many scientists believe that we arrive at this understanding through the activity of a type of neuron called a mirror neuron, which allows us to simulate the actions and feelings we witness within our own brains. When you see someone reach for an object, the reaching neurons in your own brain fire. Other animals similarly register the behavior of their fellow creatures through mirror neurons. But humans take this capacity for mindreading further, understanding thoughts and feelings and being able to reflect on them. Humans might be the only species to possess full-fledged mindreading capability. Because we understand one another’s needs interpersonally, we can understand the collective needs of all of us and work for the greater good.

Cooperation has been as significant as competition in the fight for survival that has allowed our species, homo sapiens sapiens, to have such extraordinary dominion over other creatures. For as long as we have been alive the two tendencies, competition and cooperation, have themselves struggled with one another for dominion over what might best be called the soul of humanity.

We come by the struggle honestly, as seen in our two closest living relatives, chimpanzees and bonobos. When chimpanzee troupes encounter one another, they react with aggression, hostility, and violence, and the same is true of the jockeying for power within a troupe. But when bonobos encounter strangers, they mingle, have sex, and groom one another; sex and playfulness are also the way peace is kept within the troupe — bonobos are the hippies of the primate world. We share over 98% of our DNA with both of these species. Some people are more like chimps, others like bonobos, and most of us are mixtures of both. We mirror these interspecies differences within our own internal division between aggression and cooperation.

It is telling that in our collective self-image, the benevolent characteristics of humans that contributed to their survival, are often overlooked. We look for and expect violence to be the sole route to evolutionary fitness in other species as well. When bonobos were discovered in 1927, scientists were blind to their clear behavioral distinctiveness from chimps (they were even called pygmy chimpanzees). They weren’t recognized as a separate species until 1954. I wonder, did it take the capacity to destroy our species through nuclear weaponry to inspire people to see that there are species who practiced alternatives to violence and domination to ensure survival?

Austen understands these competing chimp and bonobo tendencies within the human mind-brain. Her small communities thrive because there are people who understand the feelings and perspectives of others and respond appropriately — with sensitivity, compassion, joy, or whatever is called for. They cooperate. But Austen certainly knew of the cutthroat side of humanity, and it frequently makes its appearance in her novels. It is no accident that her happy endings, in which goodness and compassion triumph over our less admirable qualities, take place far from madding crowd of London, with its struggles for power, fame, and fortune: survival of the fittest.

And this, dear reader, is the deeper meaning behind Austen’s replacement of Darwin: She represents attunement and cooperation over aggression and competition. The replacement is particularly apt since our current strategies for survival aren’t working particularly well. How soon we forget the lessons of history. Extensive wars and assaults on the environment suggest that we are quickly going to hell in a handbag as a species. A kinder, gentler strategy might well purchase our salvation in a literal as well as a moral sense. What more could our money buy?

Wendy Jones is the author of Jane on the Brain: Exploring the Science of Social Intelligence with Jane Austen, forthcoming in December from Pegasus Books. 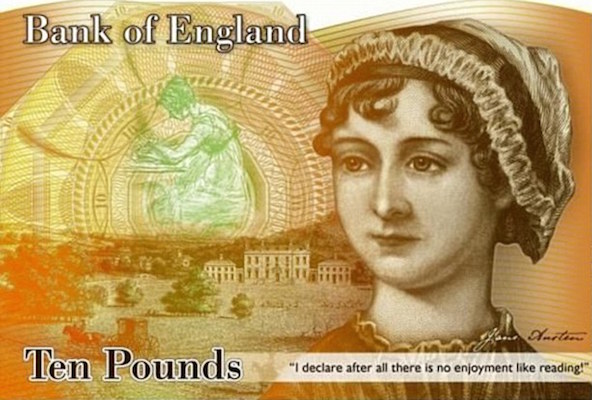