It’s been 50 years to the day since Jacques Tati released Playtime, his digressive, dialogue-light comedy about manners of being in the modern city. The anniversary has passed without remark, even in Tati’s homeland, where Playtime has always been respected, but not loved in the manner of his more accessible earlier films such as Jour de fête and Mon oncle.

There’s something fittingly downbeat about this absence of ceremony, since Playtime itself is about a series of events that are supposed to happen but never come to pass. Monsieur Hulot enters the lobby of a modern office tower for a meeting, but the meeting never takes place. An extravagant platter of turbot à la royale is presented to a table of diners in a restaurant, basted and seasoned three times, but remains uneaten. A group of American tourists, in Paris to see the sights, instead spends two days in an industrial park; the tourists glimpse the reflections of the Eiffel Tower and the Pont Alexandre III in the plate glass facades of the park’s skyscrapers, but get no closer. Viewers of Playtime have their own experience of disappointed expectations: the film is billed as a comedy but offers few laugh-out-loud moments. That the 50th birthday of a film universally hailed as one of the 20th century’s greatest has passed unnoticed makes an odd kind of sense.

Tati built the mammoth set for Playtime from scratch, on an abandoned waste dump in Paris’s south-east, and the shoot stretched over 365 days from 1964 to 1966. In his curiously transliterated  English, he described Playtime as a “difficult child, who lacks violence as well as sex appeal, but who expresses a certain gentleness.” The French public was immune to the charms of this gentleness. On its release, Playtime flopped; viewers’ main criticism of the film was that nothing happens in it. “Tati, c’est fini,” the critics said, and so it proved to be: Playtime failed to secure distribution in the U.S., and Tati, having sunk the wealth of his entire family into the project, eventually declared bankruptcy.

With the benefit of a half-century’s distance, we can see that a lack of action is exactly what makes the film so enduringly powerful. The whole point of Playtime is that it is undramatic, or dramatic at a purely trivial level: the low-stakes drama of someone trying to get the attention of a waiter, or find their way in a city when drunk. The plot, such as it is, can be easily summarized. We find ourselves in a Paris of the near future, filled with sleek office towers and spotless walkways, that’s strangely interstitial — there’s traffic everywhere, everyone seems like they’re passing through, all the shops are either about to close or about to open. Nothing seems settled. Monsieur Hulot, stooped, hatted, pipe-wielding, crane-like, arrives in town for a meeting. A series of accidents, most of them arising from Hulot’s blundering interaction with technology, contrive to divert him from his course; he ends up wandering without aim around the city, where a chance encounter leads him to visit the apartment of an old army pal, attend the opening of a new restaurant, and make friends with a group of American tourists. This doesn’t, of course, capture the richness of Tati’s comic vision; Hulot is never at the center of the action but on its margins, an observer of messy reality as others dance around him. The restaurant opening occupies most of the second half of the film, a frantic hedonism taking hold among the diners as the room’s fancy new gadgets and fittings explode and collapse, the wine keeps flowing, and the band plays on.

The film is best enjoyed as an ambling succession of densely packed comic set-pieces; each frame is crammed with characters and sight gags that reward repeat viewing. But like all fictions of the near future, it’s possible to grade Playtime on the accuracy of its predictions. Tati’s hyper-modern, reimagined Paris offered a vision of the city that would emerge over the decade ahead: in 1967, when the film came out, the towers of Montparnasse and La Défense were not yet built, and the radial extension of the grand motorways coiled around the city center out into the suburbs and country beyond had only just begun. Playtime successfully anticipated — and skewered — other aspects of a society shortly to come: the pantomime of productivity that is the modern office job, the peculiarly kinetic stasis of life in a hyper-connected, 24/7 city.

But the film most deserves our attention — especially today, with so much fear in the air about AI, the robot apocalypse, and so on — for Tati’s masterly, leisurely presentation of technology’s failure to account for human randomness and spontaneity. The characters in Playtime are not dehumanized by their encounters with technology. They become fully human by playfully navigating their way around technology — hence the “play” of the film’s title. When the restaurant falls apart, the diners improvise by fashioning a new bar with the remains of the interior’s destroyed fixtures; the drunk who is ejected from the restaurant opening follows the whizz-bang, circular neon arrow at the building’s entrance around until the doorman lets him back in; Hulot himself embarks on his serendipitous journey around the city only because the layout of the modern office tower he visits is so bewildering it eventually ejects him onto the street.

In trying to make sense of his singular body of work — the work of a silent comedy genius born in the era of full color talkies — most critics have characterized Tati as a nostalgist, befuddled by the excesses of technology and sick at the loss of a gentler, more neighborly, pre-modern way of life. Others have made him into a satirical prescriptivist, a sight-gag master freshly arrived from the future armed with solutions to the creeping technologization of everyday life. In Playtime he’s neither an apologist for the past nor a prophet of doom; instead he occupies a middle ground, acting more as a dispassionate documentarian of future reality. Playtime came out less than six months before the événements of May 1968, at a time when the Situationists and Guy Debord were at the peak of their cultural influence. But there’s nothing revolutionary in the film’s rendering of this bewildering but oddly liveable near-future; there’s no visionary call to action, no mapping of the program for change. Instead Tati gives us a description of what is, a straightforward portrait, without judgment, of humans negotiating the complexity and chaos of modern life. This is not “Sous les pavés, la plage,” so much as “Sous les pavés, les fourmis.”

Fiction of the near future is enjoying something of a moment today, but Tati’s vision in Playtime is a world away from the wrenching alienations of Black Mirror or Her. It is a vision without hysteria, the rare near-dystopia that lowers, rather than raises, the viewer’s blood pressure. There’s neither glory nor fear in Tati’s understanding of our technological future, but a simple continuation of the ordinary. Amid the fuss and buzz of technology, Tati says, we make do; we adapt and bumble along. That’s not an invitation to quiescence, but a diagnosis of reality — or the reality that Tati, in 1967, believed was around the corner. Fifty years on, we can say with some certainty, and no small pleasure in the delight of his creation, that he was right. 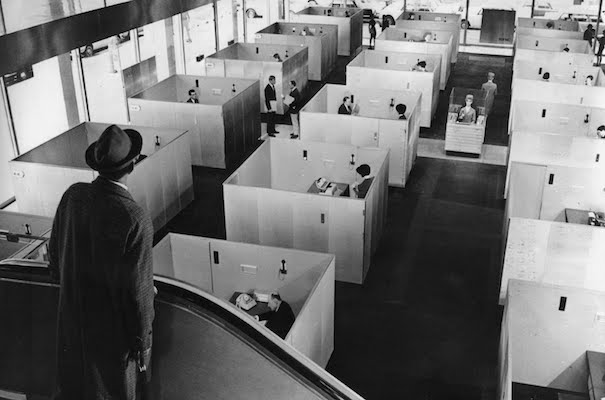