It was Jim who stole the show last month in Hyde Park, an aging hippy in a red and yellow tie-dye shirt who had come, like me, to listen to Neil Young and Bob Dylan in concert. But I’ll get to Jim later.

I saw Bob Dylan in concert decades ago. He was laconic, sullen, he mumbled the words to his songs, played for precisely one hour, and walked off the stage. I hated that concert and only went because my mother-in-law had bought tickets for us. It was the first time we had left our firstborn, Jasmine, at home with a babysitter. Even if Dylan had put a little more effort into his performance, I still wouldn’t have enjoyed it — my breasts leaked milk all through the show as I worried about our daughter. Was she crying? Would she take the bottle? We left early and rushed home; Jasmine had slept sweetly through the entire evening.

Now, 30 years later, it was Jasmine who came with me to the concert. We arrived late; Neil Young was already on stage and “Heart of Gold” reverberated through the warm summer air. We stood in the back of the Golden Circle, mostly on tiptoes, trying to get a good view of the person responsible for one of the most influential soundtracks of my youth. He might be getting on in years, but Young belted out his music with the enthusiasm of a teenager. Jasmine and I were already having fun.

Hyde Park was packed solid with lovers of classical rock, old-timers jostling against people old enough to be their kids. In the break between acts, the younger crowd herded out to buy hamburgers, chips, vegan kimchi, and beer. We took advantage of this and inched forward in the crowd toward the front. I almost tripped over Jim, sitting cross-legged on the patchy grass that was already littered with empty bottles and cartons smeared with ketchup and mustard. He’d been there since the early afternoon and his legs hurt. He looked up at me and grinned, revealing broken teeth. His eyes twinkled. “Let’s stand here,” I motioned to my daughter.

We had flown into London for this concert. We also did our homework, listening to the entire repertoire of Young and Dylan on our way to and from work, refreshing our memories. We watched Martin Scorsese’s new documentary on Dylan, and I recalled, once again, how Dylan never went out of his way to please audiences.

There was a buzz in the air and rumors that Dylan and Young would be playing together at the end of the show. A little late, Dylan got on stage and sat down at the piano. Jim scrambled to his feet and stood there, barefoot, his eyes trained on his hero. As Dylan began his first number, Jim turned to me, gave me a gentle punch on my arm. “Ballad of a Thin Man!” he said triumphantly in a broad cockney accent. “What?” I yelled back. Jim did it for the song after that, too, and after a while I stopped focusing on the dot of Bob Dylan sitting at the piano and focused on Jim, wondering if he’d be able to work out the mumbled words. Each time, Jim listened intently to the first couple of beats, swaying slightly, neck craning forward, his gray hair long and straggly, testing himself. Jim admitted he only knew the old songs; anything written after the ‘90s stumped him.

There were plenty of songs I would never have recognized if it hadn’t been for Jim. I was lost. There was a lull in the crowd and my daughter shifted from one leg to the other. Giant screens projected double images of Dylan, black hat to his head, wearing a sequined white jacket. He sat at the piano as though he were on a cruise for seniors, under strict instructions not to get carried away.

In fact, neither Dylan nor the audience got carried away. Jasmine and I left before the end of the concert. Jim noticed us leaving out of the corner of his eye and shouted in my ear that I should hang on: “There’s only 20 minutes left,” he urged, “You’re gonna miss Neil and Bob onstage together! A historic moment!” We left anyway, joining a steady trickle of people heading toward the nearest Tube station.

Outside, under an oak tree, a busker played guitar and sang “Don’t Think Twice,” his voice clear and strong, sounding more like Dylan than the man himself.  A crowd gathered around him and he pulled out a harmonica, hat tipped over his head. We walked through the gloaming, arm-in-arm, the Wellington Arch illuminated in green, double-decker buses moving by.

The next day I hugged Jasmine goodbye and made my way to the airport for the flight home. While waiting to board my plane, I listened to “Highway 61 Revisited” on my earphones. It sounded great; Dylan didn’t mumble at all. 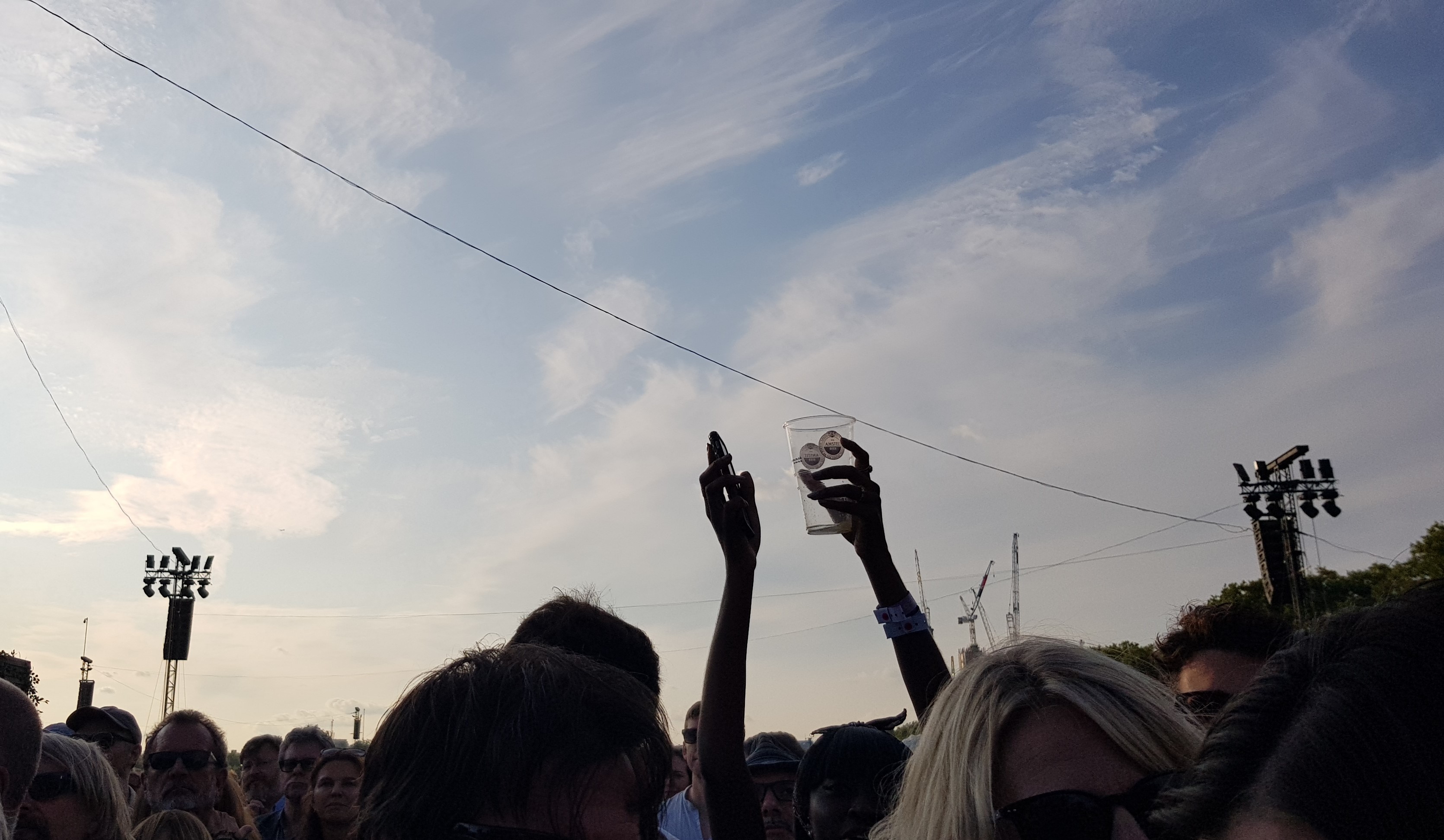