Barack Obama was still weeks away from officially declaring his candidacy in January 2007 when conservative outlets were reporting that he had attended a madrassa as a six-year-old in Indonesia — and that he had been raised a Muslim.

A CNN report at the time quoted an Obama spokesperson denouncing the rumors as “trash” and “completely false.”

The episode is telling — not just for what it contained or telegraphed about the tone of the future campaign, but also for where that CNN segment is archived: on Barack Obama’s official YouTube page.

Sandwiched between a video of him announcing his exploratory committee and a preview of the official announcement of his candidacy, the segment is preceded only by a few issues-based videos and a couple of innocuous “get-to-know-Barack” clips. Not even his speech at the Democratic National Convention in 2004, which catapulted him on to the national stage, has a spot on the playlist before it.

That a repudiation of rumors about his supposed Islamic faith would come before he even announced his run says just as much about the man as it does the climate he was operating in. Just as a number of African American scholars have noted that one cannot talk about Obama’s political journey without a discussion about the politics of race in the United States as Michael Eric Dyson did in his 2016 book The Black Presidency: Barack Obama and the Politics of Race in America, a similar framing is necessary to understand the former president’s relationship with Muslim America.

Obama and his team spent the rest of that first campaign and his two terms as president negotiating his platform of inclusivity within the constraints of an American politics of fear that ostracized millions of citizens on the basis of their religion.

His was not the first presidential campaign to face attacks over its candidate’s real or speculated beliefs. Jefferson and Lincoln were both accused of being atheists. Kennedy was attacked for being Catholic. Eager to show skeptical party leaders that he was a viable national candidate, he addressed the Catholic question head-on in a speech before the American Society of Newspaper Editors in 1960:

It was the right move, both morally and tactically. To ignore or give in to fear of Catholicism would have meant certain electoral peril. Obama had a similar calculus to make, albeit with different variables. Since at least his 2004 senatorial race, Obama had been dogged by rumors about his religious background. By the time his presidential run was in full swing, those rumors had largely morphed from an alleged Muslim past into a secret Muslim present coupled with a foreign birth.

The central “idea” of Barack Obama was that any American could see their reflection in him. That is how he packaged himself: the son of a white woman from Kansas and a black man from Kenya. His diversity, something he told the country in 2004 he was “grateful for” and knew was uniquely American, was also inextricably Muslim. He was the son of a Muslim man and for 15 years, the stepson of another Muslim man, and spent nearly four years of his youth in one of the most populous Muslim countries in the world. It’s a fact that, although documented in his first book, Dreams of my Father, Obama didn’t often bring up during the campaign.

For a candidate wanting to connect with an electorate that held increasingly negative views of Muslims and Islam, it was the right tactical move. In 2007, Pew found that a majority of Americans either had an unfavorable or neutral opinion of Muslims, and 70 percent thought their own religion was very different from Islam. For any politician then, Muslims, who made up just a few million citizens spread out over a vast country, had a negative net value. But for the first black candidate who had a serious shot at the White House, and who also had the middle name Hussein and a last name that rhymed with Osama, the association could be disastrous.

The campaign made a calculated choice: embrace their candidate’s diversity, but only so far as it was deemed acceptable by a majority of the country. By the summer of 2008, the Obama campaign website listed the label Muslim as a “smear.”

At the same time however, the candidate for hope and change couldn’t be seen overtly jettisoning an entire group of Americans nor is there any indication that he wanted to. For Obama and his team, Muslim engagement had to be handled delicately. Every move was calculated and calibrated. Have a coordinator for Muslim outreach, but have her meet with Muslim-American leaders in private and, incredibly, express remorse for doing so when she gets caught. Remove two women with hijab from behind Obama at a rally in Detroit so no one noticeably Muslim is within the same frame as the candidate but apologize for it in private the next day. Have a black Muslim, Rep. Keith Ellison, on your website but tell him to cancel his plans to speak on your behalf at one of the nation’s oldest mosques in Iowa so not to stir up controversy. And above all else, never visit a mosque.

This pragmatic calculus worked. Obama managed to publicly keep American Muslims at a distance without many people noticing. Even if they had, polls suggested they would either not care or actually approve.

Of course there were Muslims working in the Obama campaign in 2008. Some of them went on to work for President Obama in the White House, including on Muslim-American community outreach. His was the most diverse administration in U.S. history. But America’s fear of Islam never subsided so it remained a constant consideration within the Obama White House.

So concerned was the Obama Administration about bolstering the Muslim rumor that plans for the President to visit The Golden Temple in India, Sikhism’s holiest shrine, were scrapped a few weeks before the 2010 midterms, out of fear that a photo of the president with his head covered would harm Democrats.

It is fair criticism to say it was Obama’s job to show the country how to push back on anti-Muslim sentiment, not just how to maneuver around or yield to it, especially once he was in office. While there were moments, most notably early on in his Cairo speech in 2009 and later in his annual remarks at the White House iftars, these instances were few and in front of the avalanche of anti-Muslim sentiment, barely registered as teachable moments in the nation’s psyche.

A few months after candidate Donald Trump said he would not rule out making Muslim-Americans carry identification cards, the president finally visited an American mosque for the first time and affirmed the rights of Muslim-Americans. “We’re one American family.  And when any part of our family starts to feel separate or second-class or targeted, it tears at the very fabric of our nation.” But by the time a leading presidential candidate is publicly flirting with policies that betray our founding ideals, such reminders are too late.

A president is as much a reflection of the people who voted for him as he is the people who did not vote against him. Obama handled Muslim-Americans the way the country implicitly and explicitly told him to. Trump is doing the same thing today.

The blatant anti-Muslim bigotry driving President Trump’s attempts to restrict visas and immigration from several Muslim-majority countries did not begin in 2007 or 2016, nor is it exclusive to one party.  The week after he first suggested such a ban during the primaries, his popularity surged to triple that of his closest GOP rival and within a few months, half of all American voters, regardless of political party, supported the ban as well.

In his farewell address, President Obama made one final plea to the nation. “I am asking you to believe,” he said. “Not in my ability to bring about change — but in yours.”

The historic marches taking place around the country have noticeably included Muslim-American leadership as well as countless signs of support for the beleaguered community. What remains to be seen however is whether the country has mobilized to simply let the curtain back down or to get rid of the need for it entirely. 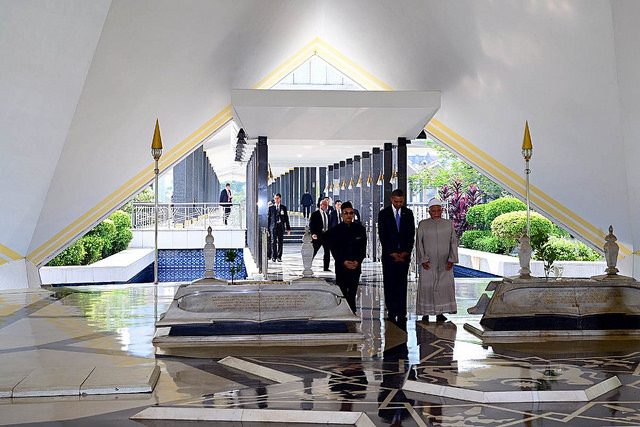