On October 5 I awoke to the news that Kazuo Ishiguro had received this year’s Nobel Prize in Literature. I was overjoyed. Over the past few months I had been translating his latest novel, The Buried Giant, into Ukrainian, and therefore felt a particular kinship with both the author and his characters. As with all my previous translations, during the translation process I had been worried about the work’s reception in Ukraine. I had often asked myself, “Would the book receive enough publicity? Would The Buried Giant make a splash in Ukrainian or remain largely unnoticed?”

The translated book market in Ukraine, after years of decline and stagnation, is now dramatically on the uptick. This growth is largely due to the restrictions on the import of Russian-language books, imposed by the state after Russia’s military intervention into Ukraine. According to the Ukrainian Association of Publishers and Book Distributors, the number of translated books has skyrocketed since 2015, increasing by 80%. While a positive trend, this tendency also makes it harder for a new publication to get into the spotlight.

Considering my trepidations about the reception of Ishiguro’s new book in Ukrainian, I was thrilled about the Swedish Nobel Committee’s decision. For once, I thought, I do not have to worry whether my translation — my labor of love — will find its readers. The award is bound to attract attention — for better or for worse.

I say for worse, because every year the less enthusiastic Ukrainian reactions to a new Nobel Prize laureate roughly fall into one of two categories. First, there are those who react with statements. These readers are usually acquainted with the author’s work well enough to point out why he or she is not worthy of the prize and to accuse the Nobel Committee of bias. In the second group are those who respond with questions: “Who on earth is that? Why not Murakami?” One of the reasons it is so important to translate Ishiguro into Ukrainian, especially after the Prize, is to decrease the number of people in the latter category.

As fate would have it, I heard the news about Ishiguro’s Nobel Prize the week I was proofreading my translation of The Buried Giant. I remember sitting down to begin my work, my heart pounding with excitement. It was in that moment that I realized: I was no longer translating Ishiguro’s novel into Ukrainian, I was creating a Ukrainian answer to the question of why this year’s Nobel Prize winner — among dozens of other candidates — was worthy of the most prestigious literary award in the world. All of a sudden, I was particularly conscious about every turn of phrase and syntactic quirk: the new responsibility I now bore was dawning on me. This was not the assignment for which I had originally signed up.

Recalibrating, I understood that I was no longer translating the author, but his fame. At stake now was not the subject matter of the text but, as if to echo Walter Benjamin’s influential description of the task of the translator, the recreation of the value assigned to the original on the winding path of its international reception outside Ukraine. My framing of Ishiguro’s words was now the only barrier between his recognized talent, the celebration of his newly acquired fame, and the reception of that fame among Ukrainian readers. Usually, in the translation process the challenge is not to underread the original, but at that moment I struggled with the temptation to overread and overinterpret the text, because I too was looking at it through the magnifying glass of the author’s fame.

However, it was not just the translation of Ishiguro’s fame that I had to contend with. Another long-established translators’ burden — that of invisibility — revealed itself in an unexpected way. The translator’s invisibility is a paradox: on the one hand, it marginalizes the translator as a mere go-between, while on the other, it testifies to a work well done. With The Buried Giant, the years of my invisibility seemed to be over. The novel is the sixth book I’ve translated under contract with one of the biggest Ukrainian publishers, The Old Lion Publishing House. Yet never before had I — as a humble translator — received so much attention from the media as I did that week of the Nobel. Interview requests from print and online media crowded my inbox.

Usually translators find their way out of invisibility only when their work is so controversial or flawed that it becomes an object of public scrutiny. There is even a widespread joke: “When we hit, no one remembers; when we miss, no one forgets.” However, in Ishiguro’s case, I drew attention even before a shot was fired: The Buried Giant was not yet published, even though it had already been translated.

Thus, I became a kind of window — hopefully, a transparent one — separating Ishiguro from Ukrainian readers, all while the final draft was still in the works. The media had limited access to Ishiguro’s novels in Ukrainian, since only one of his books, Never Let Me Go, is available in Sofia Andrukhovych’s translation, and they felt they couldn’t look for explanations of his newly acquired fame in this text alone. The newest novel, however, remained in the offing: an enigmatic land to be discovered and, upon discovery, interpreted.

In one of his own interviews Ishiguro mentioned that he always writes with translators in mind. “I want my words to survive translation,” he said. “I know when I write a book now I will have to go and spend three days being intensely interrogated by journalists in Denmark or wherever. That fact, I believe, informs the way I write — with those Danish journalists leaning over my shoulder.”

And I, obviously, had been working on my translation of The Buried Giant with Ishiguro in mind — his style, his rhythm, his narration. But after October 5 that image of him changed: there he was in front of me, Nobel Prize in hand, and there were the Ukrainian readers of his latest novel, leaning over my shoulder, to look him in the eye. Whether that look will express bewilderment or admiration, is, to a great extent, my responsibility. 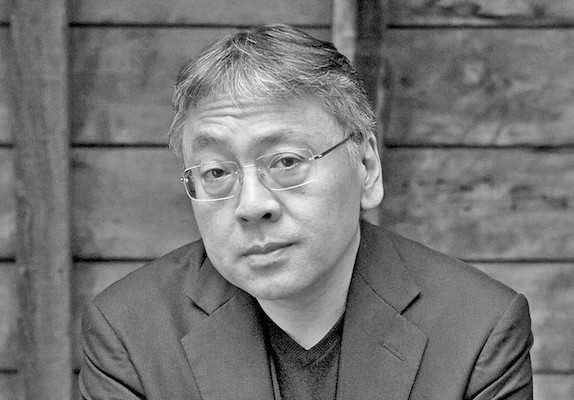