As stories of a novel virus spread across the world in early 2020, many of us had not yet heard of Zoom, much less the phrase “Zoom fatigue.” Now the brand has become a verb, like Hoover and Google, and the fatigue so many people feel after a year of long work and school days online is presumed to be universal. There seems to be consensus that we’ve had enough of gridded screens, icon hands raised, and chat boxes overflowing. The de rigeur apology at the beginning of online events goes something like this: “Of course it would be better to be gathering in person…” or, “It’s sad that we have to still be meeting this way.”

Yet how firm, actually, is this consensus? Last April, only a month into quarantine, The Washington Post’s Elizabeth Heath asked: “Are you secretly dreading the end of stay-at-home orders and a return to normalcy?”

As vaccine rollouts accelerate and we see in the not-too-distant future the much-vaunted “return to normalcy,” imagine if the life we have been living through our computer screens did not begin only a year ago but stretched far back into the distant past, and were not about to end but to endure indefinitely. That is the premise of one of J. G. Ballard’s lesser-known works, “The Intensive Care Unit.” In this story, human interactions happen only through television screens. To meet other people face-to-face, Ballard tells us, “is not only unusual; it is illicit.”

Comparing Ballard’s seemingly outrageous scenario with our current cultural moment may shed some light on the ambivalence some of us feel as we approach the impending return. He wrote the story in 1977, a time when person-to-person communication via remote screens existed only in the realm of science fantasy. The protagonist-narrator is a doctor who meets his wife-to-be when she shows up one day in his online “waiting room” for a consultation. In virtual space, they fall in love, marry, and have two children through artificial insemination. He has built his medical practice around a specialty he calls “intensive care”: fostering an idealized family life in which all activities “were made possible by television.” The doctor’s own family exemplifies this manner of happy domesticity.

In prior times Ballard’s tale likely read as chilling satire, a seeming repudiation of our faith in flesh-to-flesh intimacy overlaid with deeper cautionary notes about the perils of rapidly advancing technology. He seems to be warning us to resist the siren’s call of inventions that promise emotional comfort, lest our real emotions become repressed, or even violent. But over the past few decades, the world has inched ever closer to his vision. As technology caught up with fiction, Ballard’s warnings seemed increasingly more prescient. And suddenly, one year ago, his future arrived.

On March 13, 2020, just two days after the World Health Organization identified the coronavirus as a pandemic, then-president Donald Trump declared a state of national emergency. Later that day, governors of several states issued “shelter in place” orders. Everywhere, schools and businesses closed. Parents scrambled to set up Zoom stations for their kids and for their own work-from-home needs. We entered a truly Ballardian world.

The modifier “Ballardian” aligns with its namesake’s literary canon —  bleak renderings of a future in which his characters fall victim to effects of technological progress. In recent years, “Ballardian” in cultural conversations has referred primarily to the author’s prophecies of climate crisis, present in early novels like The Drowned World and The Wind from Nowhere. “The Intensive Care Unit,” on the other hand, speaks directly to our current on-screen world. The story’s ecosystem is an exaggerated version of the virtual dimension we have all lived within for the past year, and from which so many profess a desire to escape.

In contrast to our detailed knowledge about the evolution of the 2020 pandemic, Ballard says little about the cause of his characters’ isolation, (though he alludes to a long-ago health crisis that may have necessitated extreme practices of quarantine). Yet his point is that people are not isolated; they have all the pleasures of love and friendship without the need of touch. They live amidst treasured objects: Sevres china, Hokusai scrolls, Persian carpets. They wear heavy makeup to simulate a perpetually youthful appearance, and thus maintain physical attraction. On screen, they happily assemble as families and in classrooms, for intimate moments and group events, for sex and for funerals.

For all of us, the past year has normalized such forms of encounter. Within the first two months of quarantine, I had attended three funerals on Zoom. At one of these, there in the “gallery view” were all my many cousins, several of whom I had not seen in years. Some were dressed appropriately in black; others had invented new onscreen etiquettes, eating pizza in t-shirts as we variously remembered our aunt. There were other differences, too, from prior family gatherings. The atmosphere felt lighter and warmer, less cluttered with overtones. There was none of the hostility normally present between siblings, none of the caustic asides, snide digs sotto voce, that we have learned to dread when family milestones pull us together.

Rereading “The Intensive Care Unit” after that event, I found a passage that reinforced these impressions. Through the screen, Ballard theorized, there was “no mutual sizing up of emotions and advantage, no distrust and insecurity. Affection and compassion demanded distance. Only at a distance could one find that true closeness to another human being which, with grace, might transform itself into love.” He suggests that the screen itself has a capacity to smooth out the rough edges of relationships, de-escalate feelings that are too strong to withstand physical encounter. Can we go even further in our reading of this remarkable story, and conclude that Ballard presents the television screen as our best protection from our worst instincts?

His opening sentence thrusts us into a denouement: “Within a few minutes, the next attack will begin.” We witness a violent confrontation among the four family members as they illicitly meet in person for the first time, a gruesome scene only explained as the back-story unfolds. It was, we learn, mere physical proximity that unleashed their distrust and aggression. As the scene resumes at the story’s end, and our narrator prepares for the next possibly lethal attack from his young son, he expresses “feelings of unbounded love” toward his wife and children. It is through this lens of paradox that we might gain insight into the propagandas of our own strange time.

Here we are in the waning days of a pandemic, a zeitgeist of Ballardian scope. History may define its prevailing mood as coercive — a commanding, unified message to get off screen and back into bars and big-screen movie theaters, to resume our frantic commuting schedules, to vacation again in far-flung places. But we ought to acknowledge that what we call normal past practices were also inequitable, expensive, and bad for the planet. For those of us whose anticipation of the much-vaunted “return” is tinged with a modicum of dread, Ballard’s allegory may reshape our view, reassuring us that the most genuine human relationships can transcend physical space.

Everyone understands that one does not have to be alone to feel lonely, and most people, especially introverts, know that being alone is not necessarily a lonely place to be. Amidst the clamoring for the world to reopen, for the partying to resume, some of us are perhaps embarrassed to admit that, though of course we want the pandemic to end, and look forward to the pure joy of hugging grandchildren again, we adore certain aspects of quarantine. Cocooned in our own intimate world, getting together only with those we choose, making friends with our objects, plants, and pets, we find comfort in our own intensive care. 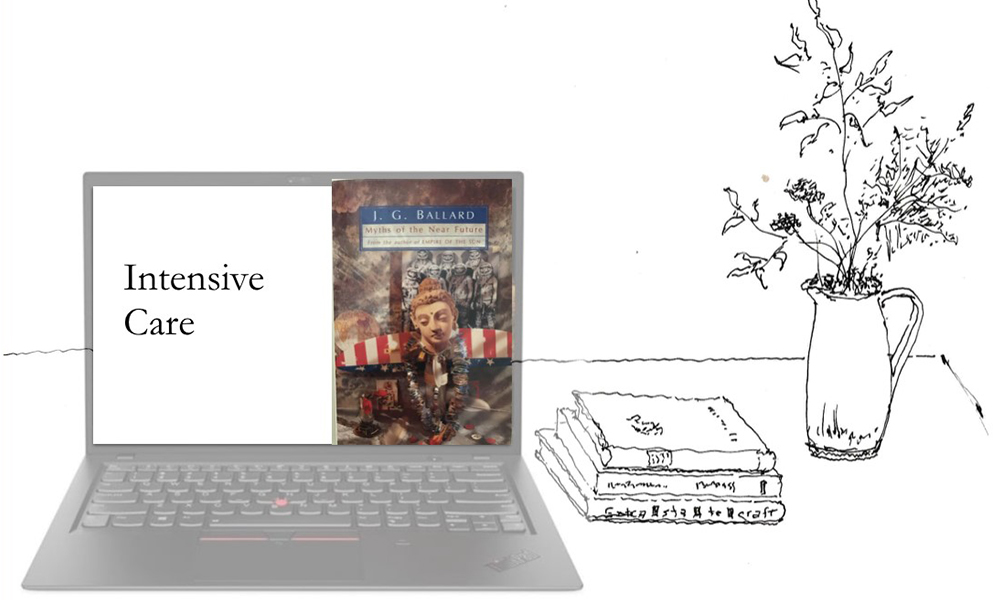