I’m on a flight to Dulles, Washington. Think of the dull roar of the plane as it cuts through the air. Think of me in row 25, an empty seat next to me, a crying baby in an oversized wooly hat and a frazzled mom in the row in front, all of us trapped on a 12-hour flight. I can’t see the baby’s face, just the hat. I’m reading Zen and the Art of Motorcycle Maintenance. On the screen, a camera displays the view from the cockpit: a pink sunset melting over clouds.

I read. I’m distracted. The woman in the row to my left has clearly taken a sleeping pill and is sinking swiftly into the deepest stage of sleep. She’s snoring. I read a paragraph. I read it again. I glare at the woman. I clear my throat loudly. Kindle tells me it takes the average reader 8 hours and 5 minutes to read Zen and the Art of Motorcycle Maintenance. I bet the average reader skips pages. I’m sure it’ll take me longer than that to read the whole book. I’ve read bits and pieces from it over the years, but never managed to get right through it in sequence. It’s about a journey taken by a motorcyclist and his son, but more than that it’s a philosophical treatise about the narrator’s past and present identities.

I snap shut the Kindle, and walk to the back of the plane. My legs are stiff. I’ll be able to stretch by the restrooms at the back. By now, passengers have settled down after dinner and the plane is in darkness, lit only by fasten-your-seatbelt signs and glowing TV screens. A couple of people are working on laptops.

There’s a young woman there, at the back of the plane, her head loosely covered in a thick red scarf, holding a crying baby. It’s the baby from row 24, with the wooly hat. The hat is a miracle of creation, a blue and pink striped balaclava, topped with a blue bobble and stitched through with sequins that twinkle in the semi-darkness. A large, padded duckling has been stitched at the front with an orange beak and big black eyes. Someone went wild with this hat, I think, as if this was the one and only chance to give a gift to the baby.

I hold out my hands to him and smile. The baby stops crying and smiles back brightly, his face lighting up at me, the distraction. His mother smiles at me, too, happy for a friendly face. The baby’s name, she tells me, is Mohammed. She breathes a sigh of relief and hands him over to me. Wisps of pale brown hair escape her scarf.

Mohammed relaxes in my arms. I inhale his baby scent, and a stab of yearning for my own granddaughter, Daphne, releases into the air. I hug Mohammed a little closer and he gurgles and coos. He’s much lighter than my granddaughter and I guess he’s less than a year old.

The woman tells me her name is Heer. She speIls it for me. I’m a translator, always curious about other languages, so right away I ask what her name means in Urdu. Oh, she says, struggling to explain in English, it means the first cold air of morning. I think of the mist curling around the trees at the edge of the forest near my house before sunrise, painting the landscape the color of pale hesitation. What time is it there now, I wonder.

Heer tells me this will be her first time in the US. In fact, she smiles tiredly, this is her first time outside of Pakistan. She asks me what I’ll be doing in the US and I murmur I’ll be working there for a month. I’m headed for a writing residency at The Virginia Center for the Creative Arts but I don’t tell her this — suddenly what I’m going to be doing seems unimportant, flimsy, compared to what this woman faces. A new country, a new life. An immigrant in the US during the Trump reign.

Her son, when he begins acquiring language skills, will know English better than her. She will always speak it with an accent, she will always struggle to fit in, will finger those twinkling sequins on her baby’s hat and think wistfully of home.

I’m going to be writing my own story of immigration during my month-long residency at VCCA. I’ll be writing about my parents’ sudden decision to move across a continent to a country I knew nothing about. I’ll be considering my own identities, past and present, and where they intersect on the map of my life.

Heer’s face is hopeful, bright. She has dark circles under her eyes. Her husband, she tells me, is already in the US. He has a job. Do you think it will be okay? She asks me. Oh yes, I say, it will be okay. There’s a pause. Be patient, I add, not knowing what to say to a woman entering a country that has openly declared an aggressive policy toward immigrants. I recall the words of the poet Ellen Hagan in “Before You Arrive,” in which she says:

This is how to leave your country.
Don’t look back. You will only see the islands
melting away.

The rest of her family remains back in Pakistan. They cried a lot when Mohammed and I left, all of them, she says ruefully. He’s the first grandchild, and who knows when they’ll see him again, separated by two long plane rides, worlds apart now. Her husband is already in the US, waiting for her and Mohammed. Look forward, I say. She nods unhappily. The US is cracking down on what Trump has referred to as “horrible chain migration,” otherwise known as family unification. I dread to think what awaits Heer at passport control.

But for now we are just two women travelling together. I tell her Mohammed’s balaclava is gorgeous. It’s slipped over his eyes and I lift it up gently. Heer says her mother made it big on purpose, so that Mohammed could wear it long after leaving Pakistan and landing in the US. When Heer hears I have a grandchild of a similar age, she offers to give me one. I have another in my bag, she offers. I’m tempted to take it because she so wants to give it to me, this offering of friendship; I’m also horrified that she wants to part with what will probably become a family heirloom, a link to her motherland, a memento she will want to hold onto.

I go back to my seat. The plane is now in darkness. I watch the screen — the view from the cockpit. It’s sunset in the west, and a thick line of white hovers on the screen like a crucifix, glinting gold. I watch it stretch tighter and tighter across the screen like a ribbon until it thins out to a liminal thread of white light.

I doze off, and when I next awaken, the screen is gray and grainy, like an ultrasound of an empty womb or a murky sea. Night has fallen in the west.

I look up to where Heer is sitting. The baby is asleep. All I can see is Mohammed’s huge hat protruding out of the bassinet. The woman to my left is still snoring but I don’t mind anymore. We are all babies here on this plane, sleeping obediently, uneasily.

The sound of a ringing phone pierces the air. It takes me a few seconds to realize it’s mine. I fish it out of my bag, surprised to be getting a call out here, in the middle of the world, halfway between west and east. On the screen in front of me is a diagram of a plane moving along a dotted line from east to west.

It’s my son, Daniel. Mom, where are all the clean socks? he says. For a minute I picture the socks, drying on the line where I hung them up that morning. I’m on the plane! I hiss into the phone. How come you can call me? The call disconnects, and then he rings back. I didn’t get a chance to say it, but have a great time while you’re away, his gruff voice tells me. Later I wonder whether I dreamt that voice.

Twelve hours after boarding in Istanbul, we touch down in Dulles, Washington DC. The queue at passport control is interminable. There’s a smell of urine in the air, and a young woman from Moldavia, just ahead of me in the queue, begins complaining in a loud voice.

I think of Heer, holding little Mohammed wrapped in a red blanket. I think of her family. I think of mine. We shuffle along slowly. The woman from Moldavia takes out a bottle of Gucci perfume and sprays it into the air. The line snakes around the hall.

My passport is checked by an officer. He asks me what my business is in the US. He asks me if I have a return ticket. He takes my fingerprints, motions me to stand in front of the camera and presses on a button to snap a photo of me. For a minute my black and white image hovers on the screen. I look bleary and worried, my hair is a mess. Welcome to the US, he says, without raising his eyes from the screen.

I pick up my luggage and exit the airport. The cold air hits me in the face as I look for the shuttle service to Union Station. I think of the mist, curling through the trees near my home, as dawn breaks the other side of the world. I think of Heer, whose name means the cold air of morning, and I hope that tomorrow morning, here in the US, will be kind to her.

Header photo by Joanna Chen, taken at The Virginia Center for the Creative Arts, where the essay was written. 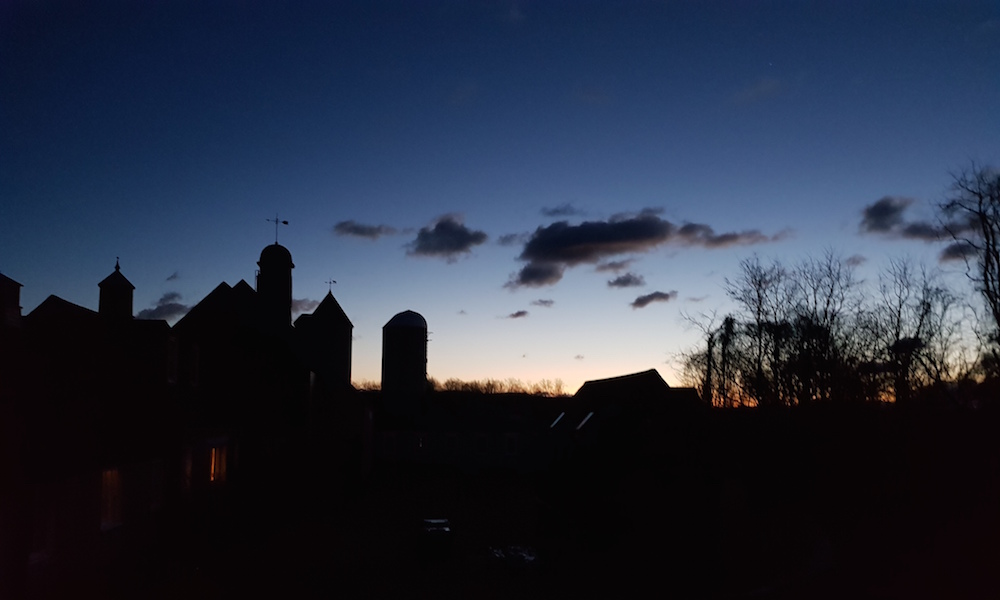