I arrived at JFK almost 20 years ago from Albania, a Muslim-majority country then torn apart by political and economic instability. We waited for years for the F-1 visa. I remember starting school and wondering whether I would be able to finish the year before we had to drop everything and leave. I tried to get two tourist visas before my F-1 finally came through. I cannot forget the adolescent embarrassment of showing up in front of US immigration officials with my middle school report cards and letters of recommendation from my teachers in order to make a good impression. Both times we paid significant fees, only so I could be rejected for unexplained reasons.

I can still recall how I kept thinking about what I had done wrong, what personality test I had failed. It must have been that B in music class that did me in. As I learned later, there was a rule that one could not obtain a tourist visa while waiting for a long-term F-1 visa. Such explanations, even if they had been provided, would not have meant much to the 12-year-old who merely felt inadequate and rejected. How many young girls feel that way now, after this Muslim ban?

In my case, the US embassy came through at just the right time. We left as my native country was in a state of emergency — tanks in the streets, people with Kalashnikovs, the whole nine yards. Going inside the US embassy felt different this time, it was safety, peace. We could hardly wait. With little notice, we turned our lives upside down and did what we had to in order to come to New York City.

I am happy we did, but even without the false starts, an immigrant’s journey is impossible. I cannot say I would wish it for my young son. My American husband has boxes and boxes of his childhood things, baseball cards, dinosaurs, old drawings. By comparison, all I have left from the first 14 years of my life are an envelope of old photographs, which look like they could have been taken over a hundred years ago. These meager mementos reflect better than anything else the immigrant experience. You do the paperwork for years, get approved, and use your savings to fly across the ocean, but once you arrive, you cast aside many pieces of yourself.

I came to a place where everything had to be relearned, every little part of life was different, from language, to culture, to food. If you have been a recent immigrant at an American restaurant and have no idea what the sophisticated food labels mean or whether your palate can really handle the strange and alien things on the menu, you will understand what I mean. This is probably why so many immigrants gain weight right off the bat — fast food joints mercifully label their foods with pictures. And if something as basic as food is a problem, just think what intercultural communication might be like. If you can’t even understand a menu, is there any hope you might understand actual humans, or that they will understand you back? Yes, but it takes a while.

Everything you were, everyone you knew, disappears as you enter a new country and try to forge a new identity. From the outside, this all sounds terribly pedestrian, but being an immigrant is like fracturing off parts of yourself. It takes a long time for all the broken places to stop hurting. For a while, I traveled back and forth to Albania, trying to exist both here and there, as a cultural hybrid. But eventually that got too hard. I felt I had to choose, and I chose America. Twenty years later, even though the broken place does not hurt anymore, it is still tender. Every time I move cross-country, I relive parts of this experience when I am in an unfamiliar place. It has all the makings of trauma.

I recount my false starts and phantom pains because from the outside, my immigration story is an easy and uncomplicated one. I may have felt like an alien immigrant on the inside, but, for the most part, I was not treated like one. The only time I ever came across any kind of cultural rejection in the US was when I took my citizenship test over 12 years ago. The INS agent asked me if I had been in contact with any terrorists during my recent visit back to my native Albania. I think the man did not like my attitude and told me to stand up. “Stand up! You are asking to be a citizen of MY country!” he yelled. I was startled and did not know how to respond to this patent display of xenophobia. By this point fearful, I informed him that I did not see any terrorists, just family members and friends. This accusation made my sense of my foreignness sting that much more. I had spent seven years trying to make myself fit and the man’s assumptions put me back in my corner as a foreigner, a freakish other, a danger. Wasn’t it my country too? Or perhaps I had become so integrated that I forgot I did not belong? Sure enough, the gatekeeper at the INS felt he needed to remind me that he was one of America’s native sons, and I was an alien.

Even as my resentment grew, I knew I had to make nice if I was going to get through the test. As an immigrant, you learn right away how to project a palatable and relatable self. After I smiled and he discovered he was friends with the librarian at my former high school, he decided I was a delightful young woman and not terrorist spawn. I had succeeded in rehumanizing myself. He said he would remember me. Obviously, I still remember him. He’s probably retired, but watching our president on TV talk about bans and walls, I am reminded of that INS agent. That man assumed I was a threat without knowing anything about me, and here our president is making the exact same assumptions about hundreds and thousands of people.

In retrospect, I feel extremely fortunate that my citizenship interview was one of the few moments I was ever greeted with suspicion rather than curiosity in my 20 years in America. As the daughter of a Muslim father and a Christian mother, I have never been made to feel unwanted or like an outsider. Instead, I found many empathetic interlocutors who wanted to hear my story.  I felt celebrated for my difference. Over time, the kindness with which I was greeted, eased the burden of acculturation. I chose America, but America also chose me. And for that, for making some of the world’s orphans feel wanted, America is already great.

My experience was obviously shaped by the fact that I am a white woman. I may have Muslim heritage, but I can pass as someone from Michigan. Many Muslim men and women detained at various American airports were treated quite differently. Hearing their stories, I remember back to my first entry at JFK. I cannot imagine what it must feel like to be greeted with rejection and denial instead of inclusion. I think of all the paperwork, all the report cards, all the little girls wearing their best outfits to the American embassy. It is an excruciating and heart-breaking experience to dehumanize and reduce people who have hurt and lost so much already to the level of terrorists. Their path forward is hard enough as it is.

As a teenager I used to walk around Manhattan and look up to Trump Tower as something dazzling and awe-inspiring. It is hard to reconcile that early association with a president that turns away immigrants. As one of America’s adopted daughters, I am proud we chose each other and don’t begrudge her the sacrifices it took to get here. But I wonder how many young immigrants will continue to choose America. I am grateful for all the people standing up at every airport with signs that say “Let them in.” They reinforced America’s greatness and her ultimate civility. And so did Judge Robart this weekend.

Our Muslim brothers and sisters are giving up their pasts for an American future. They have made many sacrifices and are ready for more. It is utterly un-American to greet them with anything other than an embrace. 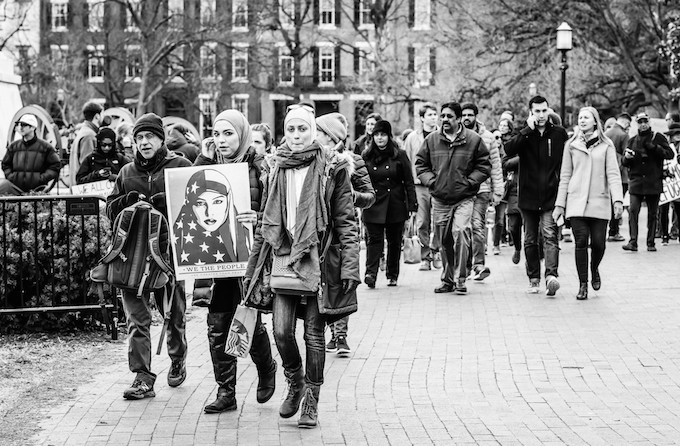