Fully immersed in the digital age, we are in a constant state of multitasking; we carry web browsers in our pockets, simultaneously talking, reading, and traveling. Whereas once we relegated combinations of image and text to children’s books, now they ooze from our fingertips as we spew emoji and GIFS alongside our letters. One particular media is well-suited to champion narrative that captures our new mode of interaction: the comic. Already steeped in image-text combinations, its layered multi-panel form speaks our digital language. Something Unusual is Happening: Experimental Comics and the Art of Visual Narrative at Printed Matter in New York surveys some of the comic artists innovating today, presenting a range of works that reflect the multitasking, fast paced, image-text communication that has become commonplace. The majority of the work is from the aughts, and includes American and European artists and stapled zines, bound books, textiles, and large prints. Shared by all is a commitment to expanding the form, pushing the limits of graphic narrative.

One method of innovation is to tell a story through visuals alone, removing the text boxes and captions. French comic Alexis Beauclair’s Boule Carree / Square Ball (2016) is a single color risograph, printed in blue on an off-white paper, which consists of eight pages of grids, each made up of 12 boxes. Each page has a different geometric group that moves and shifts over the course of the 12 panels. The first inner page shows each panel cut nearly in half diagonally with a square and circle that move down the diagonal, almost like they are rolling down the hill from frame to frame. On the next page the square rolls along a circular cutout, then on the next page seems to topple down stairs. On the last page the circle and square appear together again, in the center of more geometrically complex shapes in each panel. My descriptions anthropomorphize these shapes, offering a potential narrative to one that may not be there. Yet, what Beauclair gets at is our ability to read images, the way we read memes and emoji, in a way that is often unrelated to the icon’s literal meaning.

Other comics in the show contain more traditional plot elements, including text bubbles and characters. Lale Westvind’s Joan the Drone Pilot & Mary the Drone (2017), printed with blue ink on pink pages (except the cover which is red ink on cream), is the story of a world that exists in several dimensions, with those in charge controlling those trapped in the lesser plane for profit, until Mary arrives and attempts to escape. A heavy-handed metaphor for our use of technology, or technology’s use of us when in the hands of advertisers, it has a more traditional structure, with spreads divided into panels and text in word bubbles and boxes. But its dense imagery, heavy lines, and block shading, reminiscent of ‘70s and ‘80s pulp comics, make it at times visually dizzying and challenging.

Most of the works in the exhibition are a hybrid form of abstraction and figuration, like Patrick Kyle’s New Comics #10, a serial comic printed on newsprint that includes text written in a typewriter font and imagery in styles reminiscent of Microsoft Paint, Adobe Illustrator, and handmade stamps. Unlike Westvind and Beauclair, Kyle eschews panels altogether for dense background and boxes that float like computer windows with lines, figures and designs bisecting them. At the center of the story is Rotodraw, “a god-like robot who is in a personal crisis,” as he begins to question whether he really is a robot or not. On the final page of the comic float the words, “something unusual is happening,” from which the exhibition derives its title. “Unusual” describes all the works in the show. Though primed for this type of visual/verbal language, each narrative takes some getting used to, much like navigating a new app, the structure is familiar but the specifics take some learning. Michael Olivo’s imagery taps into this familiarity, relying heavily on visual narrative, specifically geometric forms much like Beauclair’s and loose organic forms more like Westvind’s. Criminals and detectives interact with forms reminiscent of those in old-school video games like Pac-Man and Mario, as characters jump and dart across the spreads into tunnels and mazes.

The exhibition includes works by 15 artists, and could include numerous more as graphic artists continue to rise to the challenge of reflecting on and incorporating today’s digitally-saturated lexicon. The exhibition places finished comics alongside preliminary sketches that offer insight into how these stories are formed. Hanging above the vitrines of spread open books and working materials are larger posters, illustrations of characters, and printed textiles, single-page narratives such as Sammy Stein’s large “crayon posters,” similar in structure to the Beauclair’s gridded visuals. Each of these artists radically transforms the space of page, as is the tradition of comics, expanding it into sections and dimensions previously unexplored. Even without the overt references to technology and digital dimensions, these works require a multitasking mode of reading to which we are now accustomed. No longer bound by traditional storytelling structures like plot and characters, comic artists freely use visuals and text bursts to create drama in a way that our influx of images have prepared us for, building narratives that are of and for the digital age.

“Something Unusual is Happening: Experimental Comics and the Art of Visual Narrative” will be on display at Printed Matter through July 31. 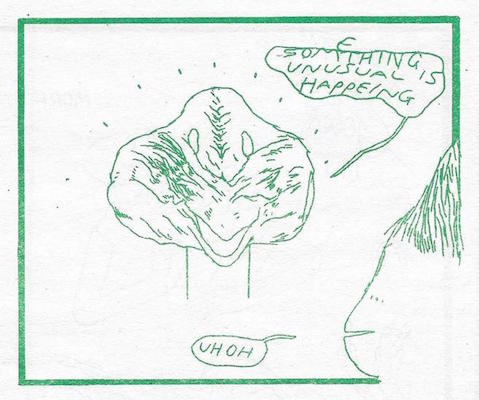