In the lobby of Boston’s West Roxbury VA hospital is the largest American flag I have ever seen. To the right is a thickly framed photograph of the President mounted on a navy wall.

The first time I saw this, I must admit, I was triggered. It was 2017 and I was a newly minted doctor in residency. I’m not sure if it was the sheer magnitude of it all. Or if it was the edification of symbols that felt anathema to me — a queer, South Asian immigrant from the “shithole country” of Zimbabwe. But my reaction was visceral: I felt my lungs draw an involuntary breath, knowing I had to separate politics from patient care.

American symbols didn’t always make me uncomfortable. When I first arrived here for college, I couldn’t have been prouder. I bought a pair of American-flag swimming trunks to blend in. On visits back to Zimbabwe, I took American souvenirs for my family. My pride for America was solidified when the Supreme Court overturned the Defense of Marriage Act. It meant I could marry my husband. I would get a green card. Maybe even a passport someday.

But over the last four years, that pride has been displaced by a familiar unease. As I peruse my Twitter feed — a curated smattering of Zimbabwean and American news — I realize that American patriotism makes me uncomfortable now because it reminds me of home.

All Zimbabwean businesses must prominently display a photograph of the president. For most of my life, this was Robert Mugabe, one of the world’s most homophobic and violent dictators. Behind Mugabe, the Zimbabwean flag sits limp, exposing only its red and black stripes. Black for the country’s people and heritage, red for the blood they shed during the war over independence from the British. There is no stripe for the 20,000 Ndebele people that Mugabe massacred in the early days of his 37-year presidency. Mugabe’s photograph, whether in an ice-cream shop or a grocery store, haunts me.

When Trump tweets that transgender people are banned from the military, I remember when Mugabe called gays “worse than pigs and dogs.”

When Trump tweets to encourage his supporters to supervise polling, I remember Mugabe’s thugs beating those who voted against him.

Since Trump’s photo was mounted in my workplace and the immigration offices where I await my green card interview, I can’t stop thinking about Mugabe. Each Tweet harrows, gives me déjà vu. Entering work the next day, I stop and pause at Trump’s image again. Behind him, on the right, the American flag sits limp, exposing only red and white stripes — the 13 colonies, independent from the British. No stripe for the children and mothers who died in ICE detention centers. The more time that passes, the more the photos of Trump and Mugabe transpose.

By the end of 37 years, most of the photos of Mugabe became torn and tarnished. The pain they evoke, however, hasn’t changed. I don’t know where the US election will take us, and I’m not even eligible to vote. What I do know from living in a dictatorship is that the image of a president, like a piece of art, gathers symbolism over time. Even when those images are put to rest in a basement, they leave legacies with each oppressive brushstroke. Each killing. Each Tweet. Undoing that trauma will take more than just replacing the image in the frame. But let’s start with that. 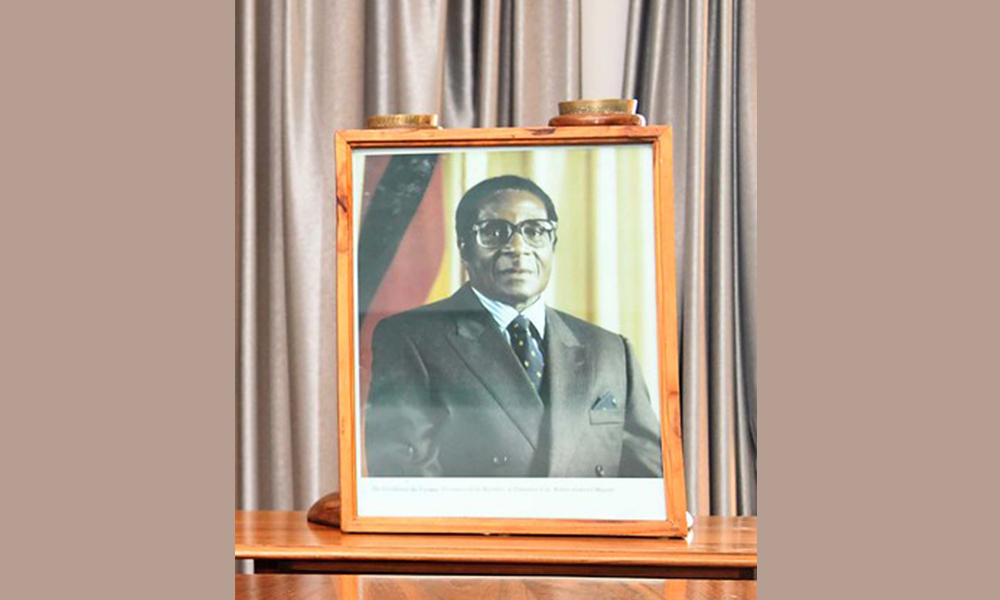