Of all the cocky things Rhett Butler said to Scarlett, one stands out for its utility. “I told you once before that there were two times for making big money, one in the up-building of a country and the other in its destruction. Slow money on the up-building, fast money in the crack-up.”

Hurricane Harvey and the deadly chorus line of Irma, Jose, and Katia is as close as the Trump presidency will come to a deus ex machina. Handing out billions for hurricane reconstruction will shore up Trump’s faltering support on Wall Street and among major corporations profiting from a bonanza expected to top $100 billion. Until special counsel Robert Mueller and his team of crack lawyers bring a case to trial, Hurricane Harvey is Trump’s chance to Make America Great Again, not by addressing the country’s problems but by covering them over with rebuilt shiny subdivisions, one last sleight of hand while we can still afford it. Like any corrupt banana republic dictator, Trump’s main job is to hand out patronage.

If New Orleans was the bellwether for America’s inequality, whites galloping out of town while blacks sweltered in the Superdome, Houston is the death knell for America’s administrative state. In her 2005 book The Shock Doctrine, Naomi Klein posited the idea that war and disaster paved the way for neoliberal capitalism — the irrational faith in supposedly “free” markets — to dominate not only the United States but most of the world. While Klein’s book veered into conspiracy theory, she was right about the long-term effects: monopoly capitalism, destruction of the middle class, and, ultimately, a dangerous weakening of civil society along with protections afforded to citizens in a democracy.

The only thing Klein left off the Shock Doctrine list was corruption, the kind that the Trump administration has engaged in so blatantly that the country’s legal establishment appears to have been caught off-guard. The constitution’s emoluments clause may prohibit the Trump family’s leveraging of his unexpected presidency, but there is virtually no body of law to give us a definitive answer. American presidents have been drunks, womanizers, and dullards, but none have been quite as sleazy as Donald Trump and his family.

What Klein also missed were the deep roots of free market ideology in American culture. “Independence” was another name for the tribalism of second-wave immigrants, the Scots-Irish-Welsh who fled British domination in the 1800s to make a home on the range. Houston was a free market avatar of the 20th century oil boom, and the consequences of Milton Friedman capitalism were on full display when Hurricane Harvey rained its fury on Texas.

Texas won’t be the only casualty. Hurricane Harvey’s aftermath will give Klein’s “disaster capitalists” a chance to further dismantle the tattered Keynesian state, handing Trump the infrastructure funding that he was unlikely to get otherwise from a Congress increasingly dubious about his fitness for office. The stock market will get a boost as companies like Bechtel and Halliburton profit from yet another disaster and the administration’s anti-regulatory ethos will be harder to challenge. Don’t we all pull together in a crisis? Let’s not forget jobs. With the Dreamers deported or hiding from ICE raids, the folks who make up Trump’s base may find themselves working construction jobs in Houston.

If the Trump administration has its way, we’ll all be living in Houston. (Je Suis Houston. Doesn’t have the same ring somehow.) As America reels from this latest crisis, the laissez-faire shibboleths that made Hurricane Harvey so devastating will hollow out America faster and more furiously, just like the hurricanes driven into the coast by the changing climate. Houston is a Postcard From The Future and as Nam June Paik tried to tell us: The Future is Now.

Start with this: Houston is the only major U.S. city without a zoning code, making the city a case study in urban sprawl. Houston was built on a dry (read: low-lying) lakebed that’s laced with bayous. The bayous are lined with concrete, steel and sheet metal, which is functional when it rains a little, but a contender for the luge event when it rains a lot, even in posh neighborhoods like River Oaks. Doing what it takes to prevent flooding, widening bayou channels, managing growth, putting in green space, might impede the only truly important flow: money. Houston’s city fathers have resisted any effort to plan for climate change, because, well, it doesn’t exist. As if that weren’t enough, parts of Houston are sinking, some as much as 2.2 inches a year.

Post-Harvey, as is customary, there will be faint irrelevant talk of stopping construction, or reconstruction, in the floodplain. Pay it no mind. Everyone who has tried to stop a suburban development knows it’s a rigged system, to quote Trump himself. That’s why $400,000 homes in nice suburbs like Houston’s Stable Gate subdivision have been flooded for two years in a row, even though they aren’t considered to be in a floodplain.

Why are subdivisions like Stable Gate built when any fool knows that the bayous burst their concrete girdles? Texas, which tried to secede once, has its own culture. Houston is the Wild West of Deregulation, where real estate developers hold sway over planning and zoning boards and when the bill comes due it’s sent to the taxpayers. The Oil Bidness is Church and State, schools go up next door to chemical plants and they build houses on a reservoir and don’t tell anyone.

“The government has become a wholly owned subsidiary of corporate America,” says Harvard anthropologist John Comaroff, who predicted Trump’s election in October. Trump’s government merely licenses the American brand by handing out lucrative government contracts to the well-connected corporate scavengers that trail disasters like albatrosses. As they say in Kenya, ranked as the world’s third most corrupt country, it’s our turn to eat.

It’s always about culture, in the end. In Houston, as in much of the American West, anti-government sentiment is an article of faith, not of reason. Donald Trump recognized Houston as the chance to save his faltering presidency, probably his only chance. But here’s what Trump won’t do. Climate change? Foreign policy? These are ideas, not gold, shiny things. He can’t buy them like a high-priced hooker, and they have nothing to do with life in Trump Tower, where the lights never go off, and you can wear five-inch Manolos because the only place you ever walk is from the elevator to the limousine. Here’s what else Trump won’t do: ensure that Americans have a functioning government to safeguard them from disasters.

Even with coordination among federal, state, and local government, even when the system worked, thousands of residents in Houston, not to mention Beaumont and Port Arthur, were forced to depend on the kindness of strangers. A female doctor who had suffered two miscarriages went into labor and was rushed to the hospital after her neighbors joined hands with local firefighters, passing her to rescue workers. A human chain, they called it, everybody holding hands to stay upright.

Who will help the people of Houston? Of Miami? New York? All along our coasts? What happens when the money runs out? Only a human chain can save us. I wanted to cry watching the Cajun Navy, a plucky band of Louisiana coonasses caravanning to Houston from Baton Rouge, airboats and bass rigs in tow, eager to repay Houston’s embrace of so many of the 800,000 made homeless by Katrina. Like everyone else, I couldn’t help noticing that most of the people who saved the old white guy from his SUV had Hispanic names. So did the three guys electrocuted when their rescue boat hit a power line. Another who lost his life was a Dreamer whose parents brought him to the U.S. as a six-year-old. If he had lived, he would have been rewarded with the threat of deportation.

The money will be found, this time, if only to grease the skids for the profit-making enterprise of rebuilding Houston. But next time, and the time after that? More postcards from the future. Twinned with our grainy videos from Texas, blurred cell phone videos from India, Bangladesh Nepal. Thousands dead, millions homeless. A few days later, Nigeria and Niger – do Americans know the difference?

Thousands will die here, too. Not because America isn’t rich enough, but because we are too corrupt. People will die because of Paul Ryan, and Steve Bannon, and, yes, Mike Pence. Stop being so credulous, America. These men want to make us all Houston. One day, and that day is coming sooner than any of us can imagine, nobody will pick up the phone. Not because our institutions were no longer equal to the task, but because our leaders did not consider it their responsibility to make them so. On that day, the rest of us will join the folks in Houston, tweeting to the Cajun Navy, watching for the airboats. 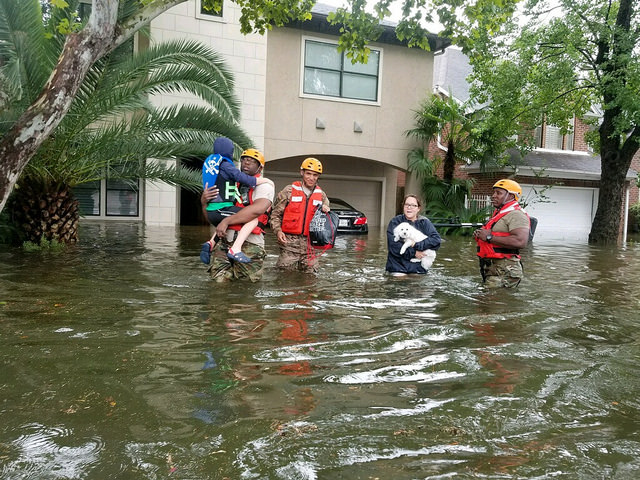