If the mythological characters of Hera and Hestia — symbolizing home and hearth, peace and family life — defined America in the 1950s, and if Ares, Aphrodite, and Dionysus — symbolizing war and sex, ecstasy and madness — defined the turmoil of the 1960s, then which mythological figures are we living with right now? What myth best captures America’s current cultural and social zeitgeist — a radical period of danger and chaos?

In colloquial speech, we use the word “myth” to mean something false, something fantastical. However, as the psychologist Carl Jung stressed, “Every myth [is] an important psychological truth.” They are not meant to be interpreted literally; rather, they are rich metaphors containing deep layers of meaning that give us a better understanding of ourselves and our place in the world. For millennia, they have acted as guides through the complexities of life, so much of which is dark and unknowable, and have given us direction. It is now that America finds itself — lost, divided, violent — and in need of understanding the myth it is experiencing, or risk falling into further disarray.

Suzanne Collins’s The Hunger Games trilogy can be seen as our modern myth. Since the first novel’s publication a decade ago in 2008, it has hit a cultural nerve and reached astonishing levels of popularity. It has sold over 70 million copies in the United States, or one book for every five Americans, and spent over five consecutive years on The New York Times bestseller list. It even outsold the Harry Potter series on Amazon to make it one of the best-selling novels in history. The films, too, have performed superbly: Catching Fire is ranked as one of the top highest-grossing films of all time, and the four films combined have earned over three billion dollars. Clearly, Collins’s imaginative powers have struck something deep within our unconscious, beyond logic and rationale.

It is tempting to dismiss The Hunger Games as “mere entertainment,” because, after all, on a superficial level, the story is filled with action, explosions, a generic love triangle, and it lacks the complexities of literary and cinematic masterpieces. Moreover, the premise is, well, a bit bizarre. In the ruins of what was once North America, ravaged by civil war and climate change, a new nation has emerged called Panem, which consists of the Capitol and twelve outlying districts. As punishment for the districts, since they lost the war, they are enslaved and must harvest their resources for the Capitol, a high-tech utopian city. Every year the districts must send one boy and one girl to participate in the Hunger Games, the ultimate reality TV show in which the teenage competitors fight to the death in a Roman gladiator-style thunderdome. Only one victor returns home, famous and rich.

Why, then, have millions of Americans become feverishly enthralled by Collins’s post-apocalyptic nightmare?

Some answers, perhaps, may be uncovered with Jung’s psychological theories. According to Jung’s conception of the psyche, beneath our personal unconscious lies our “collective unconscious.” It is the summation of subliminal forces conditioning us, extending from familial, cultural, and national levels, back to our indigenous and animal ancestors. Archetypes populate the collective unconscious as basic patterns of perceiving and responding to the world. They are revealed through their imagery in fairy tales, myths, and religions, to name a few.

One of the first questions Jung asked when examining a story was “What primordial archetype lies behind this artwork’s imagery?” Key to understanding The Hunger Games is the archetypal position of President Snow, the totalitarian ruler of Panem. Although Snow controls all economic, political, and military aspects, his power has begun to fade and is showing signs of strain. He exemplifies the Old King archetype, caught in the diminishing senex stage. Such archetypes are potentially dangerous, for as human systems age — whether they be governmental, cultural, societal, etc. — they become dogmatic, defensive, and rigid. The fear of losing dominion makes Snow even more brutally dictatorial.

A telltale sign that the king is in the senex position is the lack of the feminine, the lack of a queen — a common motif in myths and fairytales. While the king represents the dominant logos of a society, the queen is his feminine counterpart signifying the emotions and feelings so crucial for a holistic experience of life. Effie Trinket (like “trivial,” “insignificant”), host of the Hunger Games, is the primary female figure in the Capitol. She is the feeling-toned embodiment of the mindset and the zeitgeist of the Capitol: shallow, superficial, oblivious to the suffering of others, and self-absorbed. Trinket symbolizes the absence of eros in deep human relationships, as well as the missing relationship to the creative and healing energies of the unconscious.

In opposition to President Snow and his decadent, soulless Capitol is Katniss Everdeen — the missing feminine eros. Her name hints at the vital role she plays: “Katniss” sounds like “cat,” an animal associated with the archetypal feminine, sensuality, and cunning, and “Everdeen” reminds us of evergreens, trees symbolic of hope and rebirth. Her symbolic role is nothing short of a redeemer figure for all Panem, someone to carry them out of darkness and restore psychic wholeness.

Katniss hails from the last of the districts, the archetypal domain of biblical Nazareth that is found in many fairytales and myths — it is an outlying, neglected realm, disconnected from the collective’s dominant values. Although she is tested throughout the series, she consistently honors her own inner truth and principles. At age 11, after her father’s death, she was forced to adopt a protective role for her little sister, Prim. When Prim is selected for the Hunger Games, Katniss volunteers in her place. Once in the arena, she allies herself with Rue, a waif of a girl with no chance of winning, and later covers her corpse with flowers. And when Katniss and Peeta, her childhood friend, emerge victorious at the end of the Games, she offers to eat poison berries together, thereby committing suicide and guaranteeing no winner.

Katniss is, therefore, a hero. Regardless of the task, the hero repairs the collective’s imbalance between the conscious state and the unconscious vitality, someone to end the mass neurosis (or, as in Hunger Games, the mass psychosis). Heroes are fascinating figures in that they act as instruments of the Self, which is the crucial archetype guiding individual development. It serves as the center and centering force in the psyche; it is the organizing principle that holds the mind’s polarities together. The story of Katniss is, in the words of Joseph Campbell, one expression of a more universal story that defines what it means to be heroic in our “ordinary” lives.

If the plot of The Hunger Games seems familiar, it should. Collins said in interviews that a major inspiration for Hunger Games was the 2,400-year-old myth of Theseus. As punishment for antagonizing King Minos of Crete, Minos orders Athens to send seven boys and seven girls to be thrown into the Labyrinth to be devoured by the Minotaur. This is repeated every nine years until Theseus volunteers and decapitates the Labyrinth’s beast. Collins dreamt the myth forward by, as she said, portraying Katniss as a “futuristic Theseus” to make it more relevant to contemporary society.

The idea came when Collins was channel surfing on television. Images of young people competing for a bachelor or a million dollars were juxtaposed with footage from the Iraq war. The novel was published in September 2008, weeks before the election of Barack Obama, after the Bush presidency arguably took us through one of the darkest periods in recent American history. Collins would have sensed the nation’s mood, for the elements of war, social and economic inequality, climate change, loss of democracy, and an authoritarian state are reflected in the trilogy.

Fast forward to the present where voters were so desperate for change they elected Donald Trump, despite his many character flaws. Trump embodies the Trickster archetype, where narcissism is but one attribute of its character. They are deceivers and untrustworthy characters, doing and saying anything to get what they want. Nonetheless, Tricksters serve an important cultural function of overthrowing static, decrepit forms, often in an unheroic manner. They serve the important function of raising consciousness, as it is better to see the Devil in front of you than have it lurk in the shadows.

The Hunger Games is both a product of, and reflection on, the cultural moment of its creation. While we do not know the conditions that created the original Theseus myth, we do know what is happening in America now. Collins’s trilogy reveals a truth of what we have allowed ourselves and our society to become — it is ugly. It warns us of an overly powerful Old King in the form of government intrusion, corporate power, and plutocracy that needs to be replaced. It also speaks to the necessity of introducing the missing symbolic feminine as personified by Katniss, which we are witnessing with the #MeToo movement and a record number of women entering Congress. We are living with King Minos and President Snow, the Minotaur and the Games, but as both myths demonstrate, by following the examples of Theseus and Katniss — the heroes in tune with the Self — we can escape from the labyrinth with a bit of luck. 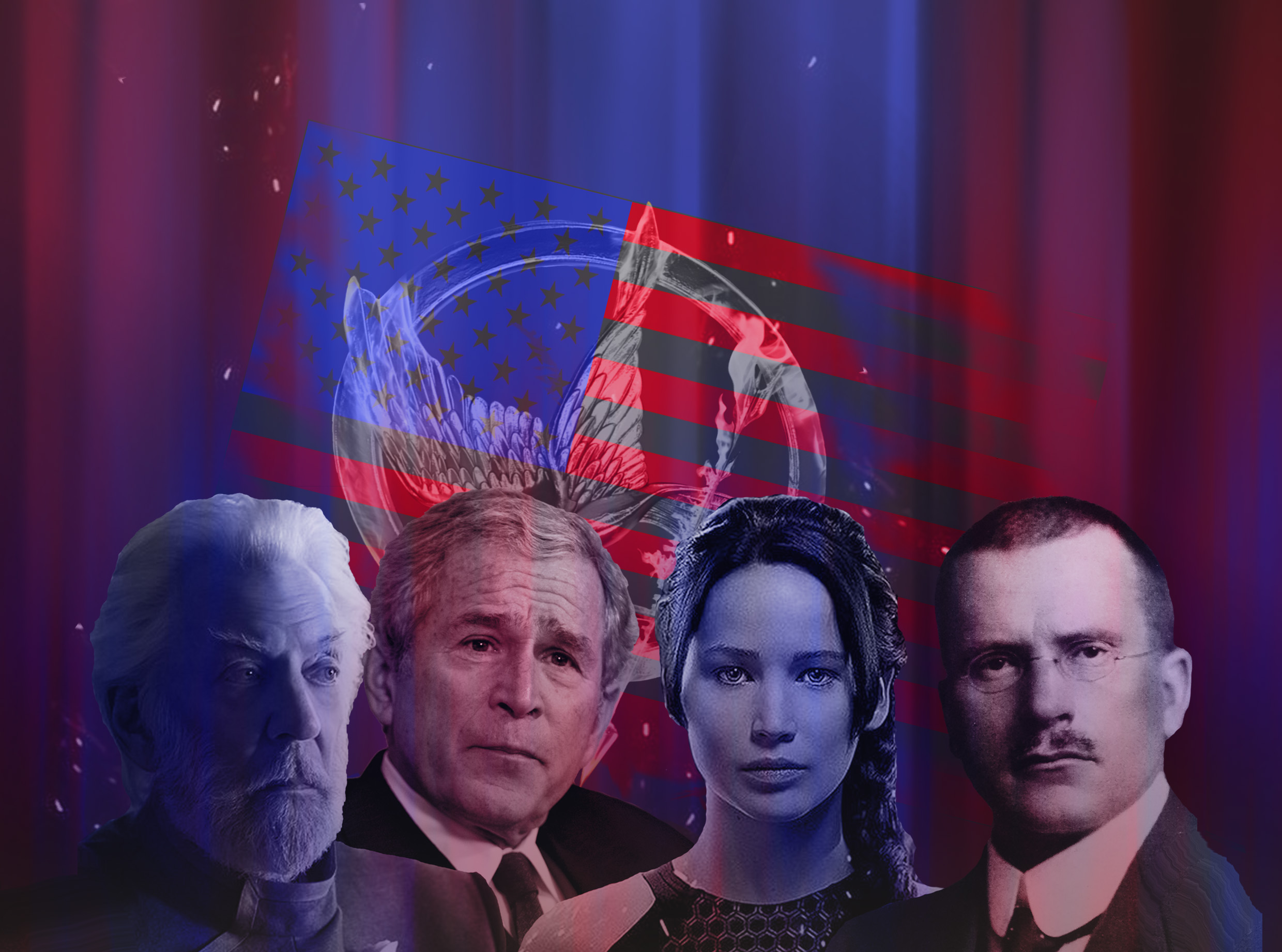