On April 8, 2017, Rosa Parks’ home was unveiled to the German public. American ex-pat Ryan Mendoza moved it there and put it back together, without fetishizing its façade, in a garden behind a 1960s-era apartment building in a Berlin neighborhood called Wedding. Passersby can at times hear Parks’ voice recordings playing from within the house, and see the lights lit behind curtained windows; they can spend time in Mendoza’s family’s garden, although they cannot enter the house — partly due to liability, and also out of respect for Parks. Rhea McCauley, Ms. Parks’ niece, had not been able to find any other way to save the house from demolition, despite the iconicity of its former occupant. Parks’ actions inspired many in the Civil Rights Movement, but death threats forced her to leave Alabama for Detroit, and her life remained difficult, as evidenced by the condition of her house. The house is an unvarnished monument to a networked idea of individual agency in the battle for equality – and yet of course it broadcasts this notion in Germany, a country that has spent 70 years confronting its past and regulating neo-Nazi behavior. After the pro-Confederate, pro-Nazi rallies in Charlottesville, Virginia, in August 2017, Mendoza is trying to move the house back to the US. He is convinced that it should stand testament to Parks’ leadership as a balance to the preponderance of uncontextualized 20th century monuments to the failed Confederacy that remain in the American South.

Mendoza is an artist, and the house — or its move and monumentalization — is to some extent figured as an artwork. When Mendoza — and his wife, Fabia, who has made a documentary about the project — began working with McCauley, the house represented to them the American subprime mortgage crisis and Mendoza’s own sense of home, although arguably its metaphor is strongest in terms of the nature and prevalence of 21st century migrancy. While “the house” has always been a potent symbol of success and failure in the human imagination, it is increasingly so in the context of today’s global population shifts — within the microcosms of changing cities and the macro context of continents. The General Assembly of the United Nations writes in its New York Declaration for Refugees and Migrants of September 2016, “We are witnessing in today’s world an unprecedented level of human mobility. More people than ever before live in a country other than the one in which they were born. In 2015, their number surpassed 244 million, growing at a rate faster than the world’s population.” Across a broad spectrum of need, humans are on the move, seeking safety in the reality of networks: a place of origin is no longer the safe harbor that is a place where one’s body, budget, or sense of self might find support. This is as true for a body displaced because of economics, climate change, war, or, in the case of Rosa Parks’ house, ideology and value.

Ideas are as networked as are people; one such network around the potent artistic starting point of the house is the practice of perverting its private character, making it public, and, indeed, at times, relational. Certainly there is a history of literally tasking the home with urban renewal using the arts. In 1993, Rick Lowe began “Project Row Houses” in Houston’s Northern Third Ward on the principle that art and the community it creates can be the foundation for revitalizing depressed inner-city neighborhoods; the project originally consisted of 22 houses on a block and a half and now accommodates 40 properties. In 1996, Lowe also conceptualized the Watts House Project in Los Angeles, a project that Edgar Arceneaux continued as a non-profit neighborhood redevelopment organization. Both of these artists continue to work in social practice, especially rich in the case of Arcenaux’s “New Financial Architectures for Creative Communities” project. Lowe spoke of Joseph Beuys as an influence, in terms of the notions Beuys propagated around social sculpture in his Public Dialogues of the 1970s.

The nature of the house as an avenue for social sculpture is clear and intentional in the 21st century projects of Carmen Argote, Olga Koumoundouros, and Mike Kelley. Their projects, “720 Sq. Feet,” “Notorious Possession,” and “Mobile Homestead,” respectively, begin with the full structure of a home that has some personal meaning to them; are transformed into sculptures and installations; and are opened up to a public in some fashion — as open house, as monument, or as community center. Each addresses issues of real estate, gentrification, and social justice, questions the legitimacy of normative values and systems of authority, and attacks the sanctity of cultural attitudes towards private space, while staying very close to the vernacular architecture and objecthood of the home. Kelley wrote of his work: “As public art, intended to have some sort of positive effect on the community in proximity to it, [the project] is a total failure.” This, he wrote before the house had even been opened or used. “Turning my childhood home into an ‘art gallery/community center’ was simply a sign for social concern, performed in bad faith.” He called it a “work in progress”, but also said that the project “is successful as a model of my own belief that public art is always doomed to failure because of its basic passive/aggressive nature. Public art is a pleasure that is forced upon a public that, in most cases, finds no pleasure in it.”

It seems as if that potential failure drives some of the embeddedness of Theaster Gates’ work in space development and critical engagement with many publics. The mimetic relation of his projects with source material offers models that unpack socio-cultural representations that shape and govern the built environment, and do so through philosophical stances embedded even in the materials he uses: gutting condemned houses in Chicago, for example, and turning them into cinemas and such, in honor of the pedigree of black lives. Thomas Hirschorn’s Gramsci Monument situated at Forest Houses in 2013 was slightly more incongruous an installation: more like a Communist house party made from plywood by residents of a South Bronx housing projects. Still, both artists seem hell bent on participation, as are, differently, Fritz Haeg and Andrea Zittel. While both artists actually have engaged with the structure of the house and the notion of the community, in Haeg’s “Sundown Schoolhouse” and “Salmon Creek Farm” and Zittel’s various properties, their thinking also reveals domestic systems. This is especially exemplified by Haeg’s “Domestic Integrities” series and Zittel’s sculptures that serve as schematics for daily life. At this level, the house crosses over from being a site into a proposal. The art-work of these places is in the questions raised about the spectator’s way of life and the choices they make, and encourages the spectator to stop looking and begin participating.

This artistic position is not a 21st century invention, as a quick look at “To Organize Delirium,” the Whitney Museum’s summer 2017 exhibition of the work of Hélio Oiticica, reveals. The show includes, for example, PN27 Penetrable, Rijanviera, from 1979, which is one of Oiticica’s constructions designed to be entered, on the stones of which and because of the water of which one’s feet leave ephemeral prints. It is in dialogue spatially and materially with the favelas of the artist’s native Brazil, as were many of his earlier penetrable pieces, made of corrugated aluminum, chicken wire, sheet metal, and so on. In these structures, the will to unite a participant with the stage that is an artwork is grounded in the tight labyrinth of a particular domestic setting — even as it does not purport to site specificity.

As another example of a kind of dance of emphasis between  installation and relational urgency, two of Yinka Shonibare’s pieces were exhibited together in spring 2017 in New York: The Victorian Philanthropist’s Parlour (1996-97) is an installation wherein the spectator can see the interior of a parlor as if it were a set or a doll’s house: one chooses whether or not to stand in front of the sham aesthetics of Shonibare’s signature Dutch wax cloth on walls, drapes, and divans and imagine a fourth wall, or walk around to the plywood framework, revealing not only the fabricated, isolated nature of the room, but the postures in which the spectator’s body and mind are comfortable. The cloth covers books in Shonibare’s The British Library(2014). The spines of the books are embossed with names of immigrants to Britain as well as with the names of those opposed to immigration, and and iPads in the “library” enable spectators to participate in the installation by recording their own stories of migration. Both works reveal Shonibare’s interest in colonialism — specifically in British colonialism of Africa, and specifically of Nigeria, where his family is originally from. They’re different, though, in terms of how they employ their spectators with respect to their spaces. If the first notes that the security of one human’s house rests on the insecurity of another’s, the second engages the insecurities of participants. Both, because artworks, propose that the values they and the house represent — to recognize sham symbols where they lie, and then to actively change the systems of representation — are worthy legacies on which we can build.

The engaging network that unites these works goes beyond any claim to national origin, even as individual pieces reveal specificities about the experiences of particular places in particular times. Curators of “Home: So Different, So Appealing” at the Los Angeles County Museum of Art (summer 2017), delineate a porous border around the home-affiliated artworks of several generations of Latin American and American Latino artists, and then divide these into further loose categories. Of perfect metaphorical pitch is Excision, by Leyla Cárdenas — which is at once souvenir, monument, frame, picture, spatially inescapable, and almost invisible — as intimate and specific and somehow therefore universal as any memory. The piece is a literal archaeological extraction of a four centimeter strip of a room, from its exterior façade to the spindles of chairs to the emptiness of air between. It was taken from a house about to be demolished in Bogotá in the name of urban renewal.

Excision has something materially and sociopolitically to do with the other work in the category it shares in this show, but as much or more to do with Rachel Whiteread’s House of 1993 than it does with its neighbors in its current exhibition. House was a sculpture made in London’s working class East End: a life-sized cast of the interior of a condemned terraced house made by spraying liquid concrete into the building’s empty shell before its external walls were removed. House was a monument to lost domestic space and to a whole way of life, evoking the former occupants through their very absence and through the entombment of the space. Its controversial creation and destruction made it a focus for public debate about the nature of contemporary art. In the way that it awakened an awareness of the community around it, House became more than a sculpture, or entered a more open space for what sculpture is. In a world where home is more elusive than ever, artists are among those on the move, sometimes by election but usually otherwise, and are searching for meaning along the way, using the house as the north star of metaphors. 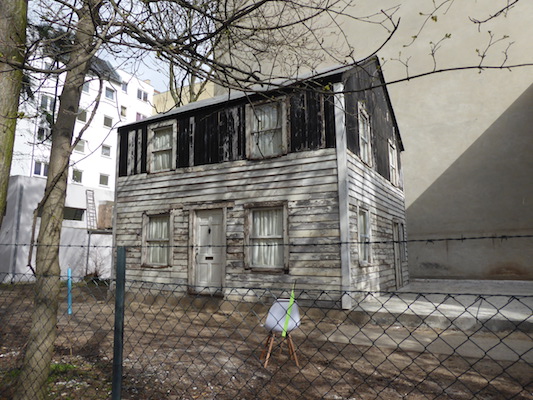