We fell to our knees, high above a gorge, at an under-visited safari lodge beside one of Zimbabwe’s national parks. Our daughter was with her grandparents in Illinois. Our friends from Los Angeles stood there with us, mouths open wide. Bemused, or maybe proud, but surely aware he was the reason we’d come so far, our pal from Harare closed his eyes. The beauty we beheld was incongruous, after everything I’d read, and I was strangely relieved when I learned the river below swarmed with crocodiles. Back in America, it was just barely 2017.

It almost didn’t exist, this park. Surrounded by lands decimated by poaching and mining, a tender ecosystem survived mainly because of a tenuous agreement with nearby villagers, who shared fees paid by tourists (like us) who came wanting to see (and not kill) the giant animals who lived below.

But it was hard to forget entirely the specter of violence, or at least a kind of violence. Our guide’s grandmother once lived here, I was told. I thought about the idea of having a guide. The foundations of a person’s home lay under grass and bush. There was already a tension building, between what I hoped for and what seemed likely to happen. I thought about how — by the strange logic of such places — what we wanted to happen most tomorrow was to encounter something truly dangerous.

Going somewhere new is always a gamble. So many things can go wrong. It is maybe smarter, in a basic way, never to leave home at all. But the human condition is a queer one, and for this reason we travel and read books and leave our homes — seeking that hurtling sensation of entering an unknown world — and the thrill can be mostly about coming back up for air, returning to the place you actually live, and then seeing how a life might be lived better.

The history of Zimbabwe, from what I knew, was soaked in as much blood as it was hopes or dreams. Of all the places on earth, how had I ended up in Harare? And why was it here that I began to acknowledge some of what could happen in my own country?

Sitting on a plane, first an epic flight from Los Angeles to Dubai and then a long haul to Zambia and eventually a rainy landing in Zimbabwe, I did what I often do when I feel scared or overwhelmed: I started reading.

First I pounded through Alexandra Fuller’s Scribbling the Cat. Author of the stunning memoir, Don’t Lets Go to the Dogs Tonight, which I’d read years earlier, Fuller is the kind of electrifying writer who might accidentally permit an uncareful reader (like myself) to view “Zimbabwe” as exotic backdrop for a mom’s insane drinking, a childhood spent enduring various farm-related calamities, and the occasional specter of abstract conflict or injustice. That memoir is one of the most stirring portraits of family and madness I’ve ever read.

But I hadn’t really understood why. Now I was steaming toward the very country she’d written about — and I was more attuned to dictatorship, more afraid of the worst things we could do to each other, and an unlikely guest of a Zimbabwean friend who lived in Los Angeles and insisted we come — so I was reading Fuller’s other book, Scribbling, which was less a memoir than a spasm of intense reporting, a reckoning really, in which the author forces one soldier in what was then Rhodesia, in the 1970s, to tell us how far he had gone.

Asking the stewardess for more wine, I nearly vomited during one scene: the white soldier is trying to flush some rebels from the bush. He tells Fuller that in the nearby village, when he couldn’t get a black woman to talk, he hitched up her skirt and pulled down her underwear. From a crockpot bubbling over a fire, the soldier began to ladle out stew and put it where stew does not belong. Just before the woman died, she talked.

Slipping in and out of nightmares — gory sketches of atrocity, the power of our wheels touching the ground, quick snapshots of passing through customs and border control, images of a new president back home — I remained tense during the 12-hour drive from the capital, over terrifically difficult roads, down nearly the entire length of the country, through checkpoint after checkpoint, to the border with Mozambique. Word had it snipers hid in the bushes.

This I learned in Peter Godwin’s The Fear. If the battles for independence had been vicious and cruel, what came after, when Rhodesia transformed into Zimbabwe, was in some ways just as upsetting. Putting aside questions of economic policy or the country’s situation in the larger decolonization of southern Africa, or even the specific collapse of the Zimbabwean currency (at one point, you needed trillions of dollars to buy a loaf of bread) Godwin focuses on how longtime leader Robert Mugabe, again and again, allegedly uses the dictator’s toolbox of intimidation, arrest, beatings, and murder to stay in power.

Does power change a man or reveal who he really is? Outside the car, I saw slogans for the opposition still scrawled on some of the rock formations along the road. These felt like tattered remnants of a lost time, and I wondered what form of power existed such that no one had even bothered to paint these slogans over.

Then, deeper into the interior, we got a flat tire and pulled over to the side of a blood-red road. It was humbling, to feel vulnerable, to wonder what would happen next, and then a man resting under a tree scrambled to his feet. He walked over and smiled broadly. From his pocket, he produced a length of what looked like sweet taffy, and I watched as he used tools and taffy to do the work of repairing a tire. I tried to admire his technique, but I couldn’t stop starting at a length of old tire in the shadows.

To silence the opposition, Godwin writes, one trick was to cut lengths of tire just like this, to be used as whips. A favored method was to beat someone on the bottoms of their feet so badly they could no longer stand. I leaned against our vehicle, thinking about home, aware I knew only vaguely what I’d read and not much more, noticing a length of wire in the dust as well. One man told Godwin about another method, how he’d been dragged along the road by his testicles, tied in a noose made of wire just like this. He said he had voted the wrong way.

At first light, with the repaired tire and a 12-hour drive behind us, we climbed into an open-air Land Rover: five residents of Los Angeles, one of them from Zimbabwe, all of us headed back to America. I wondered what would happen in the coming days or weeks or years and desperately wanted to return smarter or better or somehow different but for now what seemed more urgent was a herd of impala streaking across the tall grass. A warthog and her pups followed, slinking into foliage and with languorous indifference, a giant nyala turned its head slowly toward us.

A lot of what had happened and was about to happen in America seemed impossible. I still couldn’t believe this was our life. In the first days after the election, I think many of us felt those waves of dread and foreboding. But without anything tangible to hold onto, I found I was mainly scared, but couldn’t say exactly why, or how bad it might become. You could plan and you could fret but nothing prepared you for the thrumming reality of an even darker now.

Then, suddenly, we were face-to-face with what we both feared and desired. One after another, here they were, these powerful, terrifying creatures. You didn’t want to see a wild elephant this close. And yet you did.

“An elephant will tenderize you if he wants to,” our guide said. “Even a man as big as I can fit in a small bag when he’s done.” He reversed slowly and then more rapidly, at one point nearly plunging us into a river to give those elephants more room. I could smell their breath and feel their steps and, when it seemed we might be clear, the man retook the road. But this was the moment a big bull rounded the corner, all by himself, ears flared and trunk pointed down.

This was not good. I wasn’t afraid, though, of my political rights being taken away nor of the frailty of democratic institutions. I didn’t resent how people had voted nor did I wonder if there’d be a chance ever again to vote in an election that mattered as much. I was mainly afraid of being gored.

The bull elephant took a good look at us and what I felt was ancient, apolitical, and pure. He raised up on his hind legs and started coming right at us and I braced for the worst.

Three weeks later, back in Los Angeles, I stood in a crowd of nearly a million people, holding my daughter’s hand, on the first day of a new era. My friend from Zimbabwe was there, too. I had wanted us to go camping on the beach, north of Los Angeles, to take this little girl and my worries as far away as possible from what we could to do each other. But the tents and the sleeping bags stayed inside. Because she insisted we go to the march.

My mind was still in the clouds, torn somewhere between the history of Zimbabwe and the future of America. Who could say, in the right time or circumstances, what a man or woman was really capable of? Despite myself, I washed away into a sea of men and women, many in handmade hats, under a throbbing Los Angeles sun, and I started to chant with a set of voices that were louder than mine. 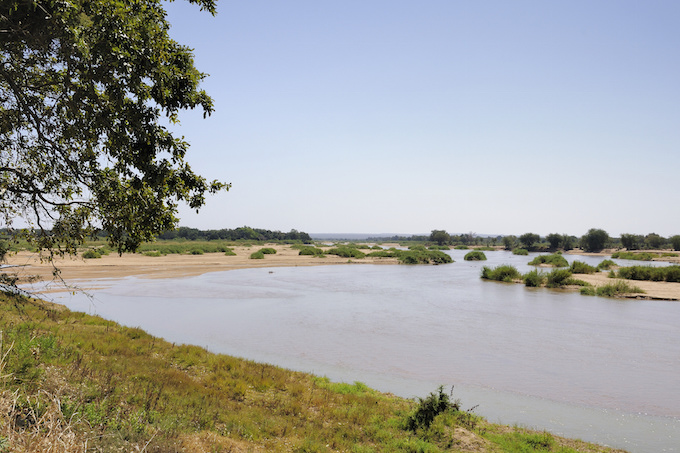