By Robert A. Rosenstone

I can’t answer the title question for the other 450 scholars in my profession — the majority in recent decades — who have felt the need to write essays or books about their own lives and careers. For me the process was a long struggle to understand, through the dark and shifting screen of memory, aided by documents and publications, if and how my works of history, written over the last half century, have both reflected and inflected the larger culture. My goal in writing a memoir was not, however, simply to obtain a deeper sense of self-knowledge, but also to share with others the hard-won insights I have earned by researching, thinking, and writing about the past.

Adventures of a Postmodern Historian tells a tale that hardly belongs to me alone. It chronicles how someone trained in the norms of the profession in the mid-20th century is moved to alter his beliefs about and practices of history over the next few decades. The reasons for these shifts are a mixture of personal interests and desires, meta changes in the social, cultural, political, and technological landscape, encounters with books and people, and the impact upon academia of new theories about the relationship between language and reality, past and present. Such a mixture can hardly be precisely measured but it can best be explored as part of a life story that meshes the objectivity of the historian with the subjectivity of the writer of fiction.

The book centers around the sites of four major projects and the books that emerged from them: Franco’s Spain and Crusade of the Left, a history of the Lincoln Battalion; the Soviet Union and Romantic Revolutionary, a biography of John Reed; Japan and Mirror in the Shrine, a work on Americans who travelled to the island in the 19th century; and Hollywood for Visions of the Past. It is written in line with director Alfred Hitchcock’s definition of drama: “Life with the boring parts left out.” In each historian’s life and career, there is drama during the processes of research and writing. Yet two tendencies of the historian’s memoir detract from expressing this. The first is the inclusion of so much detail, so much dutiful listing of events and people, that the overall thrust of the work disappears into a welter of disparate moments and facts. The second is an avoidance of the personal, the subjective, the intimate, and the psychological in favor of the external markers of a career. This leaves out major questions that underlie our work as historians: Why do we choose our topics? How do we decide what approach to take? How do we choose to shape our narratives? And to what extent do the experiences and physicality of the research process itself mark the works we produce?

The sources for Adventures are standard: personal memory jogged by letters, diaries, journal entries, articles, books, and other traditional documents. But the form is meant to challenge the boundaries of the genre and to offer suggestions for broader, more unusual literary strategies to evoke the moments and movements of the past. Though roughly linear in structure, the book partakes of collage; each section does not necessarily follow directly from the previous one — it may overlap, or precede, or occur in a different time zone altogether. My desire was to avoid conjuring the past as a seamless story devoid of ambiguity, for it seems to me that a search for the truths of the past should allow our works to express some of the ambiguities and disconnection that marks all our lives.

To express myself fully and to perhaps expand the possibilities of the genre, I have written Adventures in more than one voice. There is the author, who is not afraid to be ironic, humorous, or to describe the romantic impulses that can motivate the practitioners of history. I’ve also included dialogue for conversations that took place so long ago that nobody could possibly remember the exact words spoken (these are in italics, to show they are not direct quotations); fictional letters based on inferences and extrapolations from conversations and written documents, sent to the author by intimate friends — letters that depict and comment on his activities, rationales, and experiences in a far more critical way than can the historian himself; fragments from my previously published works used to suggest how personal experiences can become part of the history one writes; and reflections on our changing notions of the past, as well as on how the demands of literary form affect the shape of our histories.

All this may give you as sense of why the word “postmodern” occurs in the title. For some people the word may be problematic. I first heard it in the late ‘80s, when it was applied by some critics to Mirror in the Shrine, my multi-voice, innovative narrative that dealt with American sojourners in Meiji Japan. Later I occasionally embraced it as I attempted to make the contentious case, in essays and books, for dramatic films as a vehicle of history. If its definitions can seem so multifarious and contradictory as to have become meaningless, the word still speaks to me of something real and important. This is particularly true when I ponder the differences between the intellectual, cultural, and historical climate of the ‘60s, when I was trained as a historian, and that of today, long after revolutions in both communications and research techniques, after the subjectivity of language snuck back into our discourse, and after topics for historians have expanded to include the once unthinkable: sexual practices, gender identities, and non-human topics such as codfish, garbage, trees. Adventures is in part meant to raise questions about the forms in which we tell the past, personal and social, and to suggest ways of nudging them towards the loosened sensibilities of the contemporary world. 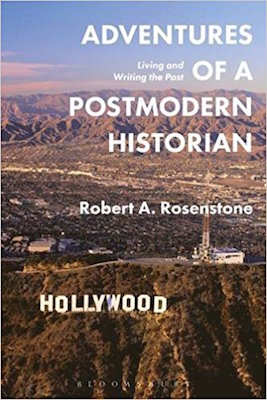