During my recent visit to China, I was astounded by the media’s obsession with Donald Trump, the orange-haired, China-bashing, abrasive Westerner. But rather than hating him, the general feeling was more like the tolerant affection one might have toward a spoiled child — or toward someone who might benefit China because of his greed for profit and disdain for human sensitivity.

The Asian media was no less excited about Hillary Clinton, whose Chinese name is Xi Lai Li, literarily meaning: Hope arrives with beauty. Books on Hillary Clinton, however, are few in China due to her political unpopularity with the government. In America, they are much more abundant. Among that long list, I discovered online this elegant volume called The Evolution of Hillary Rodham Clinton, written by Sonya Huber.

The blurb for this book claims that “Sonya Huber’s short and accessible book takes a ‘balanced’ look on Hillary,” and I find the tone of the book delightful. It provides us with a highly personal and intimate look into the woman called Hillary Clinton.

The author, Huber, is a college English professor and a labor activist who switched her party from Unaffiliated to Democrat, for the sole purpose of voting for Bernie Sanders. She originally rejected a publishing proposal to write a guide book on Hillary Clinton, repulsed by how much Bill Clinton had slashed welfare two decades earlier, while claiming to be a Democrat. But her curiosity was piqued.

Although she voted for Sanders in the Connecticut Democrat primary, she was chafed by the increasing centrality of “Bernie Bros” to Sanders’s campaign and the nagging perception of mansplaining by the candidate himself. In contrast, “Clinton became an anchor point, a concrete representation for women about the struggles of women in the United States and she became appealing because of the very dynamics of the conversation about her.”

The hate Trump supporters have for Hillary, for instance, are what Huber calls “a mix of retrograde sexism and anti-establishment resistance.” It was this stench of sexism that motivated her into writing this book.

Huber dissects Clinton’s political commitments, while chronicling her own political evolution. Clinton is Coca-Cola to the Bush family’s Pepsi, she writes, accusing Bill Clinton of creating the New Democrats, a group that undermined welfare and brought about mass incarceration in the name of a War on Drugs.

Huber is also critical of Clinton’s early history in Arkansas, when she served on Wal-Mart’s board, where Sam Walton called Hillary “a very strong willed young woman.” But Huber notes that in a state notorious for its weak labor movement, Clinton did nothing to help.

On Hillarycare, an issue dear to the author’s heart, Huber wrote that, it was not the profit interests that derailed Clinton’s healthcare reform; rather it was the fact that as a woman and First Lady, she was seen as overstepping her role, and her power thus interpreted as “evil”; her gender toppled her legislation. Of course that “failure” nonetheless served as the template that President Obama used to draft the Affordable Care Act.

As time passes, Huber notices her attitude toward Hillary changing. She concludes by saying:

I find myself surprised by how much I am drawn to Hillary as a leader: she’s not a show-boat who plays politics for the sake of racking up points. She seems much less interested in exacting revenge than her husband was. She works hard, she’s intelligent, pragmatic, and experienced. She has been through decades of continuous public scrutiny and crashing humiliation, and yet manages to get up and smile in a way that seems genuine […]. Hillary isn’t just any woman; she is a woman who has taken good positions as well as bad with regard to women’s lives. Those positions are what her supporters are excited about.

By the closing pages, I found myself moved by the passion in her words. Although it is a long way off in China, maybe it’s time we Americans had our first female president.

Author bio: Da Chen, a graduate of Columbia Law School, is a New York Times bestselling author from China, who lives in Temecula. 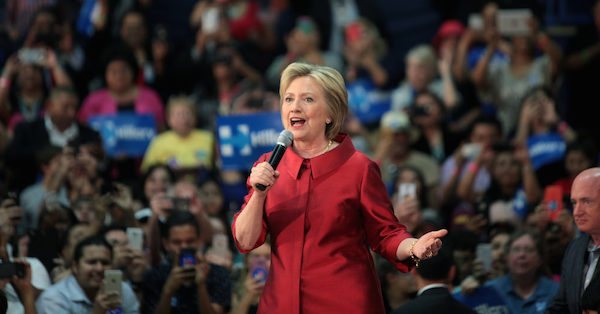