On and around November 8, 2016, American history changed. The transition was at once immediate — in the days that followed, an uptick in hate crimes were reported across the nation — and subtle — the newspapers still refreshed as usual, though now each front page was emblazoned with the headline that Donald Trump had just been elected president. Now, a few weeks later, it is still early; life has proceeded onwards, though with telltale clues scattered like breadcrumbs. When speaking of the president-elect’s incoming Chief of Staff, a member of the transition team described their role as: “to make sure the trains run on time.”

So terrified was I by the prospect of a Trump presidency that I first volunteered, then for four months worked, on the Clinton campaign. There were many of us there, people otherwise disconnected from the everyday mechanisms of politics who had been motivated by an emotion approaching historic inevitability, a fear that violence of the kind hinted at by Trump had happened before in other countries and could be replicated within our own. But others, apparently, were not so afraid; or others, apparently, wanted it.

How did it happen, and what will happen next? These are the questions that have since been repeated by myself, by friends, by family and by peers. How did it happen? Theories abound: it was the white working class’s fault; it was diversity’s fault; it was the liberal bubble, and stodgy old Hillary Clinton, and, and, and… The last one perplexes me.

Our respective perceptions, fixated as they were on certain images or phrases, in short, did not match up. A disconnect has formed, particularly online, surrounding our reactions to presidential candidates and other politicians. We speak the same language but interpret it differently, allowing small pockets of both liberal and conservative support to flourish in the same social media spaces, separate from one another like islands.

“I was thinking of that very thing, about how Hillary is presented,” says Alana Johnson, the 33-year-old Los Angeles children’s librarian behind the cult Instagram account @HillaryLooks. The Instagram, which has been featured in the the Daily Mail and is followed by fashion bloggers and politicos alike, is ostensibly a collection of different looks that Hillary Clinton has been photographed in over the years. In reality, though, the often-obscure images chosen and posted by Johnson portray Clinton in a way that is immediately familiar to anyone who listened to feminist dance-punk band Le Tigre’s election anthem and wholly absent from the popular narrative regarding her loss: she’s relaxed, capable, and a little hip. “I have more than 11,000 followers,” Johnson notes, “and I started getting even more after the election.”

The Instagram was born out of a sense of both personal activism and frustration for Johnson, who found herself bedridden due to a neurological syndrome. “This is where my library background comes in handy,” she says of the photos with which she populates the account. “My willingness to deep dive into the internet. One thing I’ve found that’s really interesting is that you can’t find as much with Google as you used to be able to. For example, they [no longer] index WordPress blogs, and a lot of the images that I found were from a lot of women out there, particularly older women, who have just been die-hard Hillary people for life,” and will post “a photo round-up of Hillary Clinton.”

“Post-election,” she observes, “I’ve noticed that younger girls — like teenagers and early twenties — are doing Tumblrs of Hillary, finding Google images of her looking sassy.” In this brave new post-election world, images of Hillary Clinton — and to a lesser extent, images of other Democratic politicians like Kamala Harris — are being clicked on, commented on, loved, and shared. In safe pockets of the internet like @HillaryLooks and the “secret” Facebook group Pantsuit Nation, these photographs aren’t simply a way of promoting one’s political alliances — they’ve become something like talismans of resistance.

But on the other side, a similar phenomenon has taken place. Shortly after I chatted with Johnson, she forwarded me a link to another, stranger account called @ClassicDonald, and I found myself peering into the looking glass world of conservative Instagram. The account, which boasts a mixture of over 14,000 bots and seemingly real people as followers, is affiliated with an app of the same name, Classic Donald. The person running all of this — whoever it might be — agreed to satisfy my curiosity and answer some questions, and then promptly disappeared.

But I’m still curious. The account’s posts follow a similar pattern to the retro Hillary Clinton photo accounts like @HillaryLooks and others, but twisted and transmogrified in such a way as to portray Donald Trump as a kinder, softer version of himself. “RARE: Running errands with the fam. Ivana, Donald Jr., and Donald Trump,” goes the caption of a recent post, paired with a black-and-white photograph of the three of them outside of a grocery store. Other posts, though, are laced with the same kind of acidic troll-y humor of 4Chan and the white nationalist alt-right. (“Does this trigger you?” reads a November 11 caption paired with a photo of Trump hugging a pile of money.) The world of conservative Instagram, to those of us who rarely venture its borders, is a surreal place, where carefully-filtered images of lattes and bespoke jeans are paired alongside the occasional frog emoji, rants against “Killary,” and the ever-present #MAGA hashtag, a strongman phrase if there ever was one.

Who could possibly be behind this? I wondered as I clicked on one self-described “paleocon” account, where a photograph of the Orwellian slogan “Ignorance Is Strength” was paired alongside the caption “Motto of our age.” It was a poster from a London playhouse, but was the caption serious or was it a joke? Then again, this propensity towards disbelief is what got us here in the first place, isn’t it?

This is the downside of the social media image: What should be educational sometimes isn’t, and anything that could be reacted to with outrage can also be easily explained away. Raw emotion concealed as a joke is the parlance of the Internet. “Sorry, not sorry!” goes the slang; to troll, or to argue ugly beliefs that you may or may not believe in, is done for sport. The troll’s humor, in which nothing is ever serious and nothing is particularly worth fighting for, extends in a way to same humor with which we have come to treat politicians and their public personas. Did the precedence of turning Democratic politicians into memes — The Onion’s Diamond Joe Biden, Texts From Hillary, America’s Dad Tim Kaine – neutralize the threat of walking meme and reality show fixture Donald Trump?

I, like many others, am still clicking, still liking, still sharing. On social media, many of us are speaking the same language — it’s what that language is articulating that differs. The question still persists: How did it happen? I have a distinct memory of sitting in a Seattle hair salon in November 2015, reassuring the woman cutting my bangs that the worst would not happen, that “Donald Trump is a joke.” How optimistic we all were. “A language,” Adrienne Rich once wrote, “is a map of our failures.” Our social media feeds might be, too. 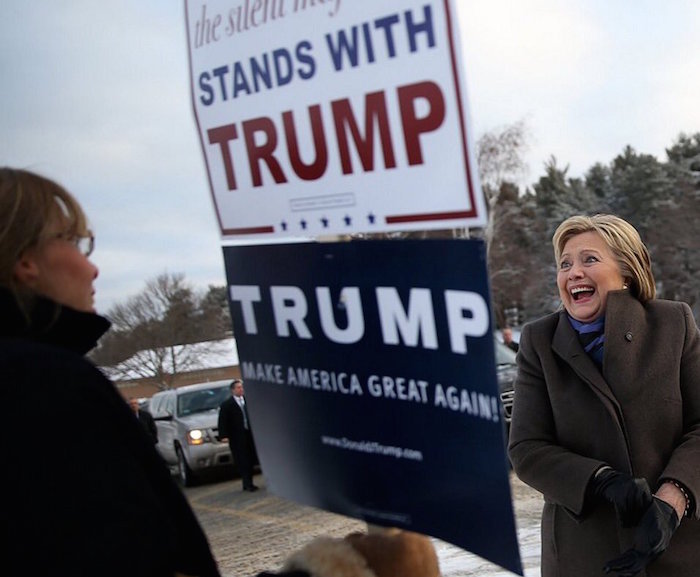