There’s a lot to look at in this image. At first glance, one sees the anonymity of Norman Rockwell’s mid-century America: the house-unparticular porch, the timelessness of the couple form. Take another look and the pillars supporting the unseen roof of the porch start to resemble the Ionic columns of the White House, the background becoming a gesture or a promise of possibility. You begin to see the image in the aggregate, and the couple, girded by a backdrop literally overwhelmed by the household, becomes the timelessness of the entire image. This photo also tells a profound story about whiteness, above and beyond the fact that almost everything in this photo is, itself, white. It’s such an all-consuming aesthetic, here, that it practically resists interpretation; like the generically familiar (to me, a white person) porch, the cover photo claims that there’s nothing to see, because we already know what it is. We have seen this image, we know this couple, “we” should be comfortable. My “we” is particular to me, but then again, I am more or less exactly who this photo is aimed at. As a queer person, I also notice the quasi-uniform-like aesthetic of Pete and Chasten — I wondered, for a second, if they were actually wearing the same pair of pants — marveling for a moment at the sartorial doppel-banging that at first seems to claim center stage in this photo, before realizing that, instead, there’s actually no sex at center stage, here. And that is part of the point.

I recently had the privilege of reading an article by my excellent colleague Ana Ramos-Zayas that doesn’t mention Norman Rockwell or South Bend at all but seems helpful in explaining what we see and don’t see in this picture. Ramos-Zayas is interested in the signals of power, and in how forms of power — like, say, whiteness — in our late capitalist moment have become alienable from their origins, portable, forms of power that can be wielded by people to whom we might imagine it does not properly “belong.” You don’t have to necessarily be white, Ramos-Zayas instructs us, to weaponize the immaterial power of whiteness; while whiteness can be and regularly is weaponized by white people, she’s interested in naming a form of power that draws from and invokes whiteness that is nonetheless still deployable by certain non-white people. This notion of whiteness works more as a practice, comportment, etiquette, or ethos than strictly a racial marker, a feature of the ever-increasingly complex horizon of racial capitalism that can be removed from the conditions of its production in white supremacy and deployed by others.

Reading Ramos-Zayas’ article gave me a vocabulary for a phenomenon that I had been trying to name but hadn’t quite been able to find. If certain forms of structural power such as whiteness have become detachable from white people, perhaps this is true of other forms of structural power as well. This is not to make a “like race” argument (although this is of course such a problematic staple of so much theorizing in sexuality studies) so much as it is to make a “like power” argument; and the argument I am making, of course, is that this photo is about a lot of things, but one of its defining features is its heterosexuality. It’s offering us the promise that our first gay first family might actually be a straight one.

This is a record with deep grooves. If you need more to convince you of this than the huge, literally white “FAMILY” emblazoned across Chasten and Pete’s well-muscled, Ralph Lauren-clad chests, then perhaps google “queer” and “focus on the family” and read a number of important and importantly-aging articles on the strategic deployment of homophobia (not to mention a host of other forms of animus) under the auspices of protecting “family values”; for  conservatives of all stripes, the family was the antidote to the homosexual. The flip side of that effect is, of course, the distinct but twinned use of “family” in queer communities, first to name ties to other queer people that exceed socially-approbated forms of kinship, and, second, the reproduction of the hothouse family by queer people used to shore up the recognizability and respectability of queer love, connection, parenting, and marriage. (We really don’t need anything more than Cathy Cohen’s 1997 “Punks, Bulldaggers, and Welfare Queens” to teach us about how this works.) Queer theorists and queer communities have coined terms like homonormativity to describe this effect, but this recent Time cover left me wondering: is this homonormativity? Or just heterosexuality? If straight people can be queer — as so many of them seem so impatient to explain to me — can’t gay people also be straight?

To be clear, I have no intention of relegating “family” to the realm of the heterosexual or the straight, for a number of reasons that reflect things like the fact that most queer people have strong ties to family, given and/or chosen. What I am saying is that the unmistakable heraldry of “FIRST FAMILY,” alongside the rest of the photograph — the tulips; the Chinos; the notably charming but insistently generic porch; the awkwardly minimal touching that invokes the most uncomfortable, unfamiliar, culturally-heterosexual embrace any of us have ever received — offers a vision of heterosexuality without straight people.

It is, significantly, a heterosexuality without women. Why might “we” want this, now?

This is also not to say that I don’t think that Pete and Chasten will not face an enormous amount of homophobia from all corners of the United States and probably beyond if Pete ends up securing the nomination. And I am of course against homophobia in all of its forms. But I am not talking about homophobia, here, and this little essay is not a critique.

Rather, it’s an effort to register the fact that heterosexuality has become portable, and to ask, for example, whom this portability might serve. In Leo Bersani’s in/famous 1987 essay “Is the Rectum a Grave?” he muses at one point about how the immense fear and hatred of seropositive people provoked a “the good citizens of Arcadia, Florida” to burn down the house of a (straight) family with three hemophiliac children who had been infected with the virus through blood transfusions. They did so, Bersani argues, “because in looking at three hemophiliac children they may have seen — that is, unconsciously represented — the infinitely more seductive and intolerable image of a grown man, legs high in the air, unable to refuse the suicidal ecstasy of being a woman” (1). 32 years later and somewhat through the looking glass, it seems we’ve arrived at a moment in which it might be plausible to imagine that United States residents waiting in dentist offices, administrative waiting rooms, and drugstore lines across the country take a glance at this Time magazine cover, and instead of seeing the possibility of a gay man, legs high in the air, they instead see a house that could be in the Florida suburbs, inhabited by a FAMILY, with or without children.

This is not a campaign against Pete Buttigieg (or for him, either; I literally have no idea what he stands for, or doesn’t), and I’m also aware that my least informed guess is probably the right one: that the office of the presidency is so totally bankrupt of positive political potential that in many ways it doesn’t actually make a difference who captures the democratic nomination (2). But it does seem interesting that as the potential of women candidates (Kamala Harris, Stacey Abrams, and Elizabeth Warren most immediately) to secure the Democratic nomination seems to be waning, Pete and Chasten appear on the cover of Time. And perhaps this is heterosexuality at its immaterial and strategic best,  a heterosexuality that could take back the Presidency for the Democrats: white, centrist, and without women.

(2) For what it’s worth, while I think the Obama presidency had a huge amount of symbolic importance, and while I think that his administration’s effort at rolling out a plan for universal healthcare was important, bold, and the right direction, we also know that the carceral state, and specifically the immigration-carceral state expanded enormously under Obama, more so than it had under the several administrations prior to his. So while I do think the Obama administration was objectively better than Trump’s we’re talking about a very low bar, here.

Photograph by Ryan Pfluger for Time. 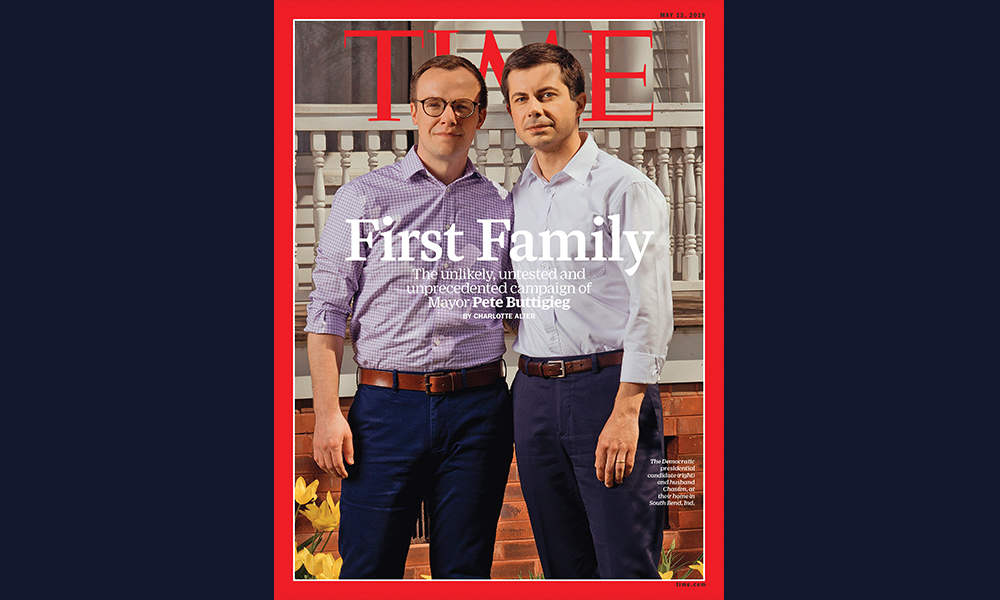