Former FBI Director Jim Comey must have felt pretty good watching Attorney General Jeff Sessions testify to the Senate Intelligence Committee. Holding on to one’s integrity looked far better than renouncing it. If the Comey testimony broke television — even turning the middle-aged former FBI director into an unlikely and tepid, middle-aged sex symbol for an America so starved for public decency that it almost finds it attractive — then Jeff Sessions’ invited nothing but derision and distaste with his muted, self-pitying, and Trump-cowering performance. Sessions was obviously happy playing second violin to the key protagonist, The Don himself, and provided little in the way of testimony or entertainment, while Comey was a protagonist in his own right. GOP loyalists sought to discredit Comey, calling into question his masculinity, but did not seem to hold Sessions to the same standards. These contrasting responses call to mind how fluid and relative masculinity has become during Trump’s presidency.

As liberals were giddy over the Comey testimony, conservatives were calling him a “coward” and a “drama queen.” “I’m sorry, men should not write like this,” said conservative radio host, Laura Ingraham in response to Comey’s statement, while others, like Trump surrogate David Urban, insisted that Comey should have “cowboy[ed] up.” It is unclear what was actually wrong with Comey’s written account, except the fact that he placed himself in the observer and therefore passive position, rather than becoming a dominant actor who confronted the president. These attacks on Comey’s masculinity, which also been described as a “feminization,” were obviously meant to discredit him, painting him as an effeminate beta-male in a society that places great value on masculinity.

Feminist thinkers like bell hooks have spoken at length about the deep damage that patriarchy does to men. hooks views stereotypical patriarchal gender roles, which have women assume a passive and supportive role, whereas men must seek dominance, as “the single most life-threatening social disease assaulting the male body and spirit in our nation.” These words have taken on new meaning during Trumpian times — on a literal level, through such efforts to publicly humiliate and discredit a career public servant, but also more subtly in the kinds of roles that Republican loyalists like Sessions are being required to assume in a party where there can only be one dominant masculine figure: Trump himself.

Whether a victim, coward, or just an honest professional baffled by the inappropriate requests made of him, Comey came out of his testimony a likable person deserving of respect, which is a lot more than we can say about Attorney General Jeff Sessions. Repeatedly saying “I don’t recall” and refusing to answer questions while insisting that he was not “stonewalling,” Sessions sounded addled and embarrassingly inarticulate. In this, he painted a stark contrast to Comey who boldly spoke the truth, remembered things in close detail, and had no problem clarifying and sounding smarter by the minute. If Comey was the victim finally and cathartically getting to tell his side of the story, and many women saw similarities between his testimony and that of sexual harassment victims, then Sessions’ complicit silence made him sound small and disempowered. He was the dutiful spouse who refuses to testify for fear he might go down too. His weak excuse for evidentiary privilege may not legally amount to spousal privilege, but it didn’t amount to much else either.

During the testimony, Sessions sounded hurt and offended by the questions he was asked. At one point, he was so visibly flustered by Senator Kamala Harris that he said she was making him “nervous” by asking too many questions too fast. (And just how nerve-wracking does he find the business of being Attorney General of the US?)

Many of the AG’s Republican colleagues went out of their way to defend their befuddled colleague rather than calling him a damsel in distress on social media. In a rare moment of wakefulness, even John McCain valiantly spoke up for his former colleague, asking Harris to give him a chance to respond.

In their responses to Comey, many Republicans seemed to consider his vision of quiet, rational, and modest masculinity as being lesser than the loud, aggressive masculinity embodied by Donald Trump. Masculine bravado has been the main vehicle through which Trump has compensated for his astounding lack of knowledge, discipline, or experience to be adequately prepared as president. In many ways, since he won the election, this largely inarticulate man has become the very embodiment of hegemonic masculinity, and a standard by which the behavior of others is measured.

Although he can frequently fall flat and sound incoherent, Trump exudes great anger and outrage in the moment. He is a dominant speaker, even, and most especially, when he has nothing to say. Many US Senators seemed to be seeking a similar swagger from Mr. Comey during his testimony. In their questions, many blamed him for being silent and non-confrontational in his interaction with Trump and choosing to follow up afterwards in a prepared, deliberate way.

Yet a very different attitude applied to Sessions. If it is unacceptable for the former FBI director to be intimidated by the president of the United States, then why was it acceptable that the sitting AG to be intimidated by Senator Harris’ questioning? Sessions also sounded hurt and offended in his testimony, as though he had been traumatized by all the accusations launched at him. It’s perfectly alright for Sessions to be intimidated, but why were all the arbiters of masculinity calling Comey a coward for not getting into Trump’s face? And why were they quiet when confronted with Sessions’ submissive behavior?

There are a host of reasons here for why his behavior was deemed acceptable — some of which have to do with Harris and how women and especially black women are perceived among Republicans. Her censoring by McCain was as much an assault on her as it was a defense of Sessions. But there is also a disturbing view of masculinity at play. If Trump’s aggressive and dominant masculinity is one of the reasons he won, by this same token it is also clear that within the political apparatus of the Republican Party there can only really be one standard-bearer of ultimate masculinity. Everyone else has to cower to Trump and their softer behaviors are considered acceptable within the GOP power vertical.

In his opening statement, Sessions sounded like a “real” man who talked tough about taking on drug dealers and fighting crime. Within a certain limited sphere, like a public statement of this nature, Sessions could afford to assume the spotlight with a display of hegemonic masculinity. Similarly, Newt Gingrich and others are able to go out and be aggressive on TV against liberals, but they have to bow to Trump within the political structure of the GOP. Sessions wants to be tough on crime, but he made an obvious show of kissing the ring. Like Chris Christie, Marco Rubio, and so many many others.

From this perspective, it is fine for Sessions to appear emasculated, even sensitive and emotional, in public because there can only ever be one alpha male in the Republican Party at one time. Trump allies and supporters renounce their self-respect to give him cover and the last word. So much so that George Lakoff’s understanding of politics along familial lines might be helpful to understanding GOP behavior at the face of Trump outrage.

Lakoff views communities at large as operating much like families, and whereas liberals espouse of more horizontal nurturing family model, in the conservative “strict father” model, obedience is the only thing that qualifies as moral behavior by a person subject to authority. With Trump as the ultimate authority in the GOP, it is perhaps unsurprising how difficult it has been for conservatives to speak out against him, although some have. And obedience trumps masculinity in this case. Or rather: the single masculine authority leaves behind a trail of bodies as other men speak on Trump’s behalf and tarnish their own reputations to defend his. It’s hard to say how long this will continue, but it’s clear that most GOP politicians have been forced to renounce much of their self-respect in their bargain with Trump.

So given the double-standard, the issue was not about whether Comey was being strong enough vis-à-vis Trump. But rather that he was defying his authority, which might ultimately strengthen the case for the obstruction charges. While Sessions was being an obedient son, Comey the “showboat” dared throw daddy under the bus. Naturally, Senate Republicans felt more sympathy for their fellow-sufferer, Sessions. What could Comey ask of them who had to compromise on a regular basis? 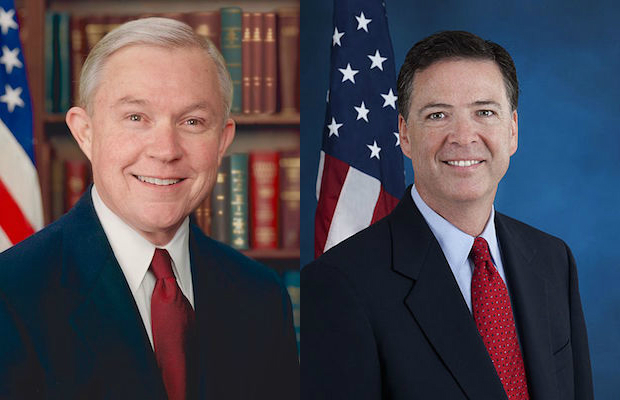