For two weeks after arriving in Dublin, I stay indoors. I prowl around the apartment until I know it takes 25 steps to cross over the living room to the kitchen and 17 steps from bed to shower. I spend a lot of time looking out the window. The leaves on the willow tree, tossing about in the wind, almost reach the balcony. I consider dangling over the side of the black wrought iron railings to touch the leaves with the tips of my fingers but decide against it.

It’s called restricted self-isolation here. Buying groceries is allowed; going to the pharmacy is permissible. I don’t go anywhere. I finish translating a book on a woman who time travels, the Hebrew melting into English; I read Seamus Heaney poems, and let the lines float around; I unsubscribe from several newsletters and delete myself from a few WhatsApp groups. My mind wanders, strangely unrestricted.

You know how Jupiter

Will mostly wait for clouds to gather head

Before he hurls the lightning? Well, just now

He galloped his thunder cart and his horses

Across a clear blue sky.

There is the occasional rolling thunder. There are two weeks of listening to the screech of the train on the tracks of the railway behind the house, of watching seagulls winging through the air as dusk falls, and people who work at Google and Wix and Facebook wheeling their bicycles along the pathway to the bicycle shed.

It shook the earth

And the clogged underearth

One morning, standing in the kitchen cradling my first coffee of the day, an ear-piercing howl rips through the cold air. Peering down, I see a silver-gray fox standing on the asphalt of the parking lot, her snout tilted upwards. She howls again, raises her head to me on the third floor. It’s a howl of despair, uncannily human. I wonder whether she’s been separated from her pack, or whether her mate was run over by one of those huge garbage disposal trucks. Why else would a fox in the middle of a city howl like that? She glances around, raises one front paw and trots off across the lawn, jumping up with agility onto the mossy stone wall that circumvents the garden. Quick as a flash, tail up, she runs along the wall and disappears. I stand there in the kitchen, the sun flickering weakly through the trees, and I wait.

Anything can happen, the tallest towers

Be overturned, those in high places daunted,

A few minutes later, the fox is back, standing by the bicycle shed, to the left of the parking lot. It’s more of a yelp than a howl this time. Later, I look up foxes online.

1. In early Mesopotamian mythology, the fox was a sacred creature, messenger of the goddess Ninhursag.

2. In Greek mythology, the Teumessian fox was a gigantic animal destined never to be caught. The fox was sent by Dionysus to prey upon the people of Thebes as a punishment for a national crime. (An illustration reveals a red fox spiraling into the air.)

I look up foxes in Dublin city. There are plenty of them, but they’re all russet colored. Except for mine. A fox was even seen trotting along Grafton Street during lockdown, pausing to observe his reflection in the window of the classy Brown Thomas department store. As for what my fox might have been doing out there in the parking lot, I discover that fox cubs begin venturing out on their own in October.

Now and again I glance down at the parking lot, thinking she might return.

The two weeks of isolation pass, and I stop conducting my life through a glass pane. I bundle up and march over to Sandymount, a nearby village with a parade of shops, wooden benches painted green and poodles on leashes. Rain scatters across the narrow streets. Beyond it, the sea,

The winding streams, the Atlantic shore itself.

As I arrive, the rain tapers off. A waiter arranges tables and chairs outside the café on the green, but all four tables are taken. The waiter shakes his head no when I ask if I can just drag a chair out. “It’s against the rules, social distancing and all that,” he mumbles through his beard and Perspex shield.

Telluric ash and fire-spores boil away.

I stand outside, tea in hand. The red café awning billows in a sudden gust of wind. The scent of fresh coffee wafts across the tables. A woman smiles at me from the table near the door. I’m no longer used to random smiles. She has shocking white hair in a bob, and eyes as blue as the sea at its deepest point. A plump corgi dog sits at her feet, a fluorescent raincoat strapped to his sagging belly. He looks up at me inquiringly.

Don’t be standing on ceremony! Come sit here, the woman addresses me, revealing buck teeth. I hesitate. I like a nice chat with strangers, but COVID and all that, I think. The dog pitter-patters two steps toward me. He’ll be looking for treats, she says.

I adjust my facemask, pull the chair a little away from the table, and sit down.

On the table lies a meticulously folded beige bobble hat, a half-finished cappuccino and a blue ceramic plate with four sausages that glint with grease. There’s a knife and fork too, thick silvery ones, but the woman eats with her fingers, carefully wiping them afterwards with a napkin.

In the last lockdown, she tells me, there weren’t even tables and chairs outside. We had to stand up to eat our sausages, she tells me.

The dog is called Barley. He’s 14, which accounts for the weight, the white around his face and the needy look in his beady eyes.

The woman goes into the café. The dog and I sit. A man in a suit nods at me, standing in line outside the café, waiting to go in. He winks at the dog. Nice dog you have for yourself, he says.

It’s a cold, crisp day. The horse-chestnut trees that line Sandymount Green are tall and thick, their leaves burnished yellow and bronze at the edges. Through the black railings I see a toddler hurtling across the grass, his father running behind him clutching a cellphone and a raincoat. A gray-haired man on a bicycle goes by, wobbling precariously. Watch out for them birds! Your last day on earth! he cries out. No one pays any attention; it’s as if he isn’t there.

Swoops, making the air gasp, tearing the crest off one,

Setting it down bleeding on the next.

For once, the wind here by the sea has died down but the leaves flutter and dance; occasionally one twirls to the ground, falling outside the perimeter of the green.

This is where Seamus Heaney lived for many years. Last time I was in Ireland, poet Tony Curtis told me how Heaney used to write in the attic of his house overlooking the sea. I ought to walk down to the sea.

Above, the skies have cleared, and blue appears between chinks in the clouds. The fox will be back. 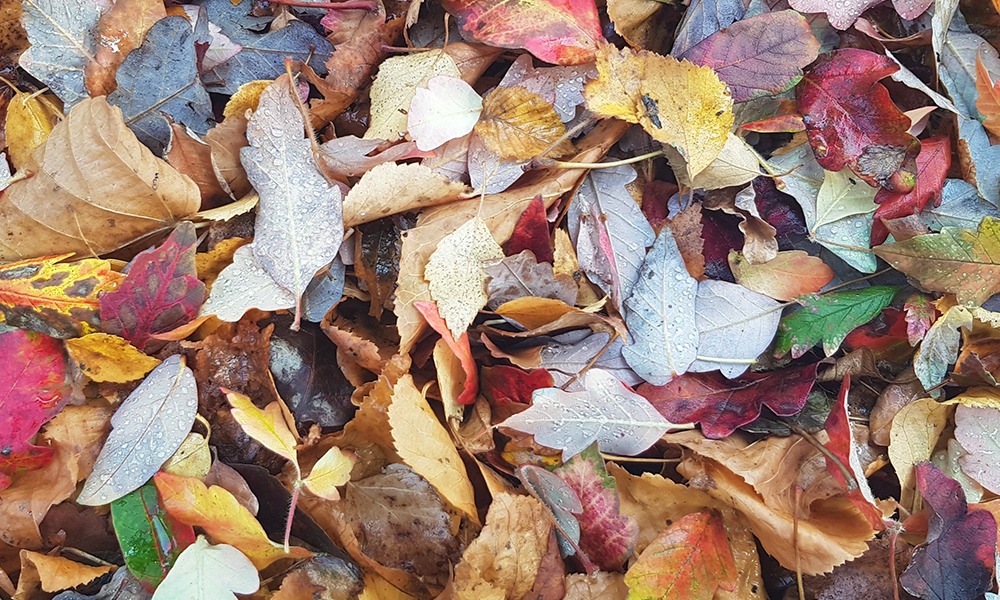