Near the end of director Sean Baker’s recent critically-acclaimed film The Florida Project, the vulgar and precocious seven-year-old Moonee, played by Brooklynn Prince, and her mother Halley, played by Instagram star Bria Vinaite, attempt to clean the motel room they call home. Halley sprays the room’s window with glass cleaner, an allusion to the movie’s opening scene where Moonee and her feral friends spit on, and then are forced to clean, a car windshield. In the world of the film, it matters what’s dirty, what’s clean, who does the dirtying, and who cleans up. The circumstances of this instance of straightening up are bleak — a visit from Child Protective Services visit in which custody of Moonee will be decided looms — but the cleaning subplot reveals many of the embedded questions of Baker’s film. The aesthetic circumstances of child-rearing prove to be decisive in The Florida Project, in which Baker suggests that of all the terrible consequences of late-stage American capitalism, the worst may be how its aesthetic ugliness forces people into moral corruption.

The beauty or coarseness of children’s surroundings, as it pertains to morality, is an old question. Douglas Mao, Professor of English at Johns Hopkins, explored portrayals of children and their environments in late-19th and early 20th century novels in his 2008 book, Fateful Beauty. Mao opens with an epigraph from Oscar Wilde: “Why I have seen wallpaper which must lead a boy brought up under its influence to a career of crime; you should not have such incentives to sin lying about your drawing rooms.” Taken from an 1882 lecture, “The Decorative Arts,” Mao argues Wilde’s wry note about aesthetic environments and behavior reveals a larger discourse playing out in the literature of the late-Victorian and early Modernist moment. He maps Wilde’s remark onto a larger 19th century discourse of “wide spread criminality and lawlessness of youth” and “the birth of the juvenile delinquent as a social problem,” and delineates the connections between youth and their aesthetic surroundings, claiming a “close if not always transparent relationship” between coming-of-age tales and “the benevolent power of the aesthetic.” Put simply: Mao claims that aesthetic environments are always at work, shaping children, whether we are conscious of them or not.

The foundations of the argument lie not far from the roots of cultural materialist Marxism, but what defines Mao’s work and his use of Wilde’s lecture is the concern for the aesthetic qualities of environments. Cultural materialists surely agree that human beings are products of environmental factors, but few would concern themselves with the color and quality of the wallpaper. When we think of the damaging factors of children in poverty, often we think of the withering persistence of structural racism, inequity in housing and education, or wage stagnation — worthy areas of inquiry — but Mao wonders how questions of beauty ungird narratives of child-rearing. The problem with public housing and many American public schools, for Wilde and Mao anyway, might well be their brutalist concrete and brick functionalism. Or, put another way, if beauty plays no roll in child development, why do elite, private institutions spend so much institutional capital ensuring aesthetically pleasing spaces?

While the time period on which Mao focuses dates back more than a century, the Gilded Age we see in Baker’s film precisely illustrates Mao’s argument about the bildungsroman and the terrible consequences of ugly surroundings. Halley raises Moonee with malignant neglect; Baker’s camera lingers on the wanderings and private entertainments of the children in the film. The mother and daughter live in the aptly titled Magic Castle Motel, spitting distance from Disney World and often mistaken by tourists for a Disney property. The film’s children watch with glee as a honeymooning couple ends up at their Magic Castle by mistake, horrified by the surroundings. The implication is clear: one doesn’t inhabit these confines by choice. The motel’s manager Bobby, played expertly by Willem Dafoe, does his best to keep the place clean and pretty. He paints the façade a jarring purple, and at one point drops a bucket of cream-colored paint from his station on a ladder. Baker suggests even trying to keep things clean and bright at the Magic Castle is something of a losing proposition. Dafoe humps a bed bug-infested mattress to a dumpster and shimmies a dead ice machine to a finicky elevator. If this motel suggests America’s ugliest corner, and Florida is always auditioning for the title, Dafoe’s Bobby struggles gamely to keep up appearances.

Moonee’s vulgarity is on display from the outset of The Florida Project. Her surroundings seem to have coarsened her: she yells, spits, and curses her way into the hearts of the audience. There is both humor and terror in Brooklynn Prince’s performance; her precocity charms and horrifies. The film’s opening scene sees the shock of a neighbor — along with Dafoe’s character, one of the few trying to keep things beautiful — as Moonee and her friends cover her windshield in their spit. The woman, who lives in a neighboring motel, enlists Bobby and a reluctant Halley to make Moonee clean up the mess. Thus begins the film’s most glaring comparison, between the flailing Halley and the keeper-of-appearances Grandma Stacey, played by the excellent Josie Olivio. Later in the film, Halley comments on the clean, homey environment of Grandma Stacey’s motel room. Grandma Stacey’s grandchild Jancey, played by Valeria Cotto, often accompanies Moonee on her hijinks, though unsurprisingly, she remains a relative innocent. Like Mao’s investigation into Victorian and Modernist bildungsroman literature, environments matter.

Both Halley and Grandma Stacey toil and suffer in these ugly circumstances, but the consequences of Halley’s parenting and the surrounding aesthetic loom over her child. Moonee defaces property, shuts down the power of the motel, and burns down an abandoned apartment complex over the course of the film, among other escapades. The local residents gather to gleefully watch the apartment fire like another of America’s strip-mall pornographies, and Baker’s intent in The Florida Project becomes clear: the aesthetic qualities of this world possess moral ramifications. After the fire, Halley’s friend Ashley resolves to keep her son inside, away from Moonee and the perversions of the ugly world outside. Inside isn’t much better — it’s still The Magic Castle motel. Halley and Moonee, instead, seem to delight in their debasement, the last gasp of people degraded by their environment. Mao writes of the “tuning” relationship between the individual and their environment, and in The Florida Project, we see a disfigured landscape produce disfigured morality.

Moonee is no simple degenerate, however, and Baker returns the viewer again and again to her humanity, to her humor. The children of the film wander through a 21st century wasteland of foreclosed properties, bleak shopping complexes, and the trash that represents the flotsam and jetsam of these late-capitalist landscapes. They fill their bellies with synthetic maple syrup and other corn syrup derivatives. A child molester arrives at the complex, and is driven off by Dafoe’s Bobby. Everywhere we see the encroaching threat of ugliness. We watch, aghast, as Moonee and her friends navigate the trash-congested drainage culvert to cross a crowded multi-lane byway. What possible chance do children raised in this milieu have? Our sympathy for Moonee in the film is a mixture of our attraction to her impossible adult qualities and our forgiveness of her coarseness. Given the circumstances, how else could she have turned out?

In the introduction to Mao’s Fateful Beauty, Wilde identifies a problem with ugly aesthetic environments for children. He writes, “Consider how susceptible children are to the influence of beauty, for they are easily impressed and are pretty much what their surroundings make them. How can you expect them, then, to tell the truth if everything about them is telling lies, like the paper in the hall declaring itself marble.” It isn’t just the ugliness of the surroundings in the Magic Castle damaging Moonee and her friends, it’s their dishonesty. The color scheme is garish, communicating a sense of life evinced nowhere. Everywhere we see the evidence of a failed American project, of death, failure, and decay. Halley turns tricks out her hotel room with men seeking escape from their wives and children. Moonee is sent to the bathroom to take a bath — the cruel irony of trying to get clean — while Halley fucks to pay their rent. When one of the johns transgresses the bathroom, remarking, “You’ve got a kid in here,” the layers of lies collide. These circumstances represent an American Dream turned American Nightmare, a magic kingdom in name only.

Baker portrays all of this lovingly. If the plot is dirty realism, the cinematography is romantic. His camera lingers, often in still shots where characters navigate the frame like a moving painting. These lives are colored with ugliness, but the film is self-consciously pretty. Dripping ice cream and strip mall facades become sites of beauty. Baker places his film in the register of Moonlight, Manchester-By-The-Sea and Beasts of the Southern Wild, works that treat American struggle with delicate and beautiful hands. It’s a complex political project, seeing the beauty in blighted American landscapes.

In The Florida Project’s final scene, Moonee and Jancey flee the motel from Child Protective Services. The viewer might well think some horrible fate awaits them — a car accident as they cross the thoroughfare, for instance — and the viewer is correct, though not in the way one expects. The girls end up in the real “Magic Kingdom” of Disney World, a scene Baker shot guerilla-style on iPhone. We leave the film’s diegetic world for a non-diegetic one. A soundtrack plays behind the girls for the first time as they run past happy families taking pictures with Disney’s signature castle. These are the same happy families from which some of Halley’s male clients seek freedom. In Baker’s world, the Magic Castle Motel and Disney’s Magic Kingdom make for two sides of dishonest, ugly American aesthetics: one environment is “prettier” than the other, and Mao suggests this might matter, though both are equally mendacious. It is the film’s final cruelty that Moonee escapes her local ugliness into another false production.

The film, deeply committed to unflinching realism, goes gauzy. We know Moonee will be taken away by CPS, hopefully somewhere more beautiful, but we know, too, the horrors of the foster system. In Baker’s world, only a few people struggle against the ugliness around them, and the rest find themselves shaped by the coarseness of their surroundings. The production of such ugliness is very much the interest of Baker’s film. Halley and Moonee can clean the window of their motel room, but the ugliness of their lives has already done its cruel “tuning.” That Baker makes beauty of these lives is a separate and disarming miracle. If The Florida Project articulates a world of such profound vulgarity, the film produces an artistic work of profound beauty. For every bit Moonee is morally destroyed in the film, audiences will find themselves improved by Baker’s aesthetic achievement. In 21st century American life, the beauty and terror are right there in the wallpaper. 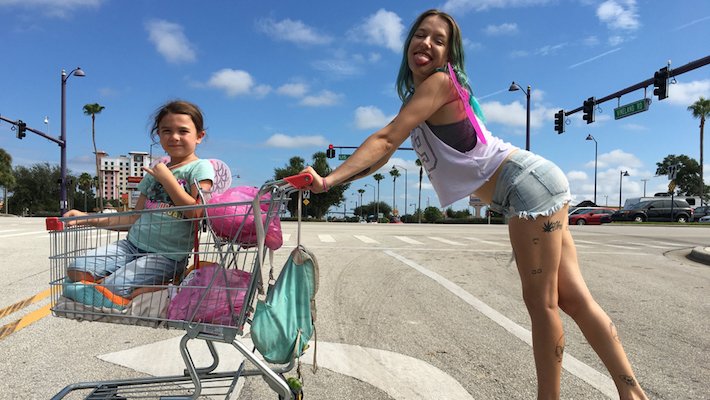