Man-made nature may not surprise us anymore. From plastic flowers and artificial grass to fake beaches and ski slopes, we are more or less surrounded by it. Yet, as often happens, what we quietly get accustomed to, can suddenly shock us and show its uncanny face. A couple of years ago, the Saudi Crown Prince announced the plans for a new city in north-west Saudi Arabia, to be called Neom, the new city of the future (“Neom” combines the Greek for “new” and the Arabic for “future”). The city promised — among other high-tech novelties — to light the city with a giant artificial moon. Although the moon as a bright object in the sky is in many ways much easier to fake than a palmy beach with sea waves or ersatz mountains with waterfalls, and although we are already used to mistaking airplanes for bright falling stars, there is a strangely hubristic feel to the idea of an artificial moon, as if faking a moon went a step too far. But why is there such a feeling?

Hannah Arendt had a similar reaction when the first artificial Earth satellite was launched in 1957, which she described as the expression of a deep wish to unhinge ourselves from the earth. In the Human Condition she discusses how the immediate reaction to the launch of Sputnik 1 was relief about the first “step toward escape from men’s imprisonment to the earth… Mankind will not remain bound to the earth forever.” She thinks that this connects to a viewpoint that found its first historical expression when the first telescope became available to humans: the Archimedean viewpoint, the wish for a point outside the earth from which to unhinge ourselves from it. Although we are “still bound to the earth through the human condition, we have found a way to act on the earth and within terrestrial nature as though we dispose of it from outside, from the Archimedean point… at the risk of endangering the natural life process,” Arendt writes.

Yet the idea that telescopes and artificial moons betray a dangerous kind of escapism might sound too narrow-minded: instead, some may think that launching a satellite or building an artificial moon is a healthy sign of progress, and presents no danger insofar as the actual earth and moon get to keep their place. After all, snowy mountains in Dubai do not aim to replace the real ones, nor does the artificial grass in the city of London or the fake sandy beach in the city of Paris.

The objection is naïve for it conceals the violence that accompanies the “escape.” First of all, it is unsustainable to have projects of artificial nature that do not ruin real nature; think of all the energy required to sustain an artificial moon glowing every night, or a ski resort in Dubai, as well as the fact that almost always a piece of artificial nature displaces real nature. As it happens, Neom does not only displace nature but also an ancient Saudi tribe, the Huwaitat people.

Further, in relating to the moon (and to the earth) as objects of our control something is already lost, long before any concretely unpleasant consequences. And it is here that our original sense of hubris lies. Relating to the moon and the earth as objects of our control is not only a sign of escaping them; it is an attempt to reassert our power over them at a time when our powerlessness is at its peak and our very attempts to master nature have generated a monstrous offspring of climate change and now of a pandemic.

During the first months of the coronavirus pandemic when the need to rethink our relation to the earthly environment and to wildlife felt more urgent than ever, a series of important decisions were being made with a focus away from the earth. In April, an executive order was issued in the US that encouraged the mining of the moon and the engagement in commercial exploration of lunar resources, and in May, NASA announced the Artemis Accords — new guidelines about how to explore the moon in the context of the so-called Artemis plan to send the first woman and the next man to the moon by 2024.

Following those decisions, NASA has now officially opened its doors to private companies to mine the moon and collect lunar soil, while the European Space Agency also recently announced the completion of its plans “to explore the moon properly.” The timing of these decisions is crucial and calls for our attention. Responding to a crisis on earth with further plans to unhinge ourselves from it is essentially linked to what Arendt called the Archimedean viewpoint, the same viewpoint that manifests itself in the example of the artificial moon.

“NASA’s grand ambitions should be applauded [as] few ventures… enthral the world’s population more than humanity’s quest to explore the universe,” commented the Financial Times, unwittingly echoing not only a utopian longing for control but also a utopian longing for the unitedness that this longing brings about.

In stark contrast, Martin Heidegger’s words in response to the first landing on the moon are anything but cheering. “The moon stopped being a moon when the astronauts set foot on it: when the astronauts set foot on the moon, the moon as moon disappeared. It no longer rose or set. It is now only a calculable parameter for the technological enterprise of humans,” he writes.

Heidegger thought that the moon was lost, that it disappeared, long before any mining process began, just like Arendt thought that we had already started the process of escaping Earth when the first telescope was built, long before spaceships were constructed. It might be hard to grasp what it means for the earth and the moon to disappear because even when we copy them or turn them into resources, there is still the planet earth and the planet moon; but what Heidegger and Arendt are getting at is that as objects of our control, the moon and the earth are denied their being-for-themselves. In other words, it is not possible to mine or copy the moon and wonder at its rising and setting.

If Heidegger’s worry that the moon stops being a moon sounds naively romantic and the diagnosis of a defense against our powerlessness sounds extreme, we might turn again to the Neom project and listen carefully to the words in its own description and promise, “a place on earth where nothing would be impossible,” “a place on Earth like nothing on Earth.”

These descriptions are uncannily similar to the descriptions that mad Caligula offers in Camus’s theatrical play, the story of the emperor who is descending into madness as he destroys everything around him, including himself. One main theme throughout the play is Caligula’s fixation with bringing the moon to the earth and his frustration at everyone’s failure to do so.  Bringing the moon to the earth is linked to a desire to attain everlasting happiness and an attempt to make the impossible possible:

Suppose the moon were brought here, everything would be different. That was the idea, wasn’t it? Then the impossible would become possible, in a flash the Great Change come, and all things be transfigured… when the impossible has come to earth and the moon is in my hands — then, perhaps, I shall be transfigured and the world renewed; then men will die no more and at last be happy.

Have we become mad Caligulas? In Camus’s words we may recognize a warning for our technological age and its danger. An artificial moon or a mined moon might function as an easy way to forget about our essential vulnerability — so brutally exposed in these last few months of the pandemic. Yet, in losing our vulnerability, our groundedness on earth, we risk losing ourselves.

“The Great Escape” is part of Balaska’s new book project Earthlings: A Philosophical Exploration of Fake Nature supported by the Kone Foundation, Finland. 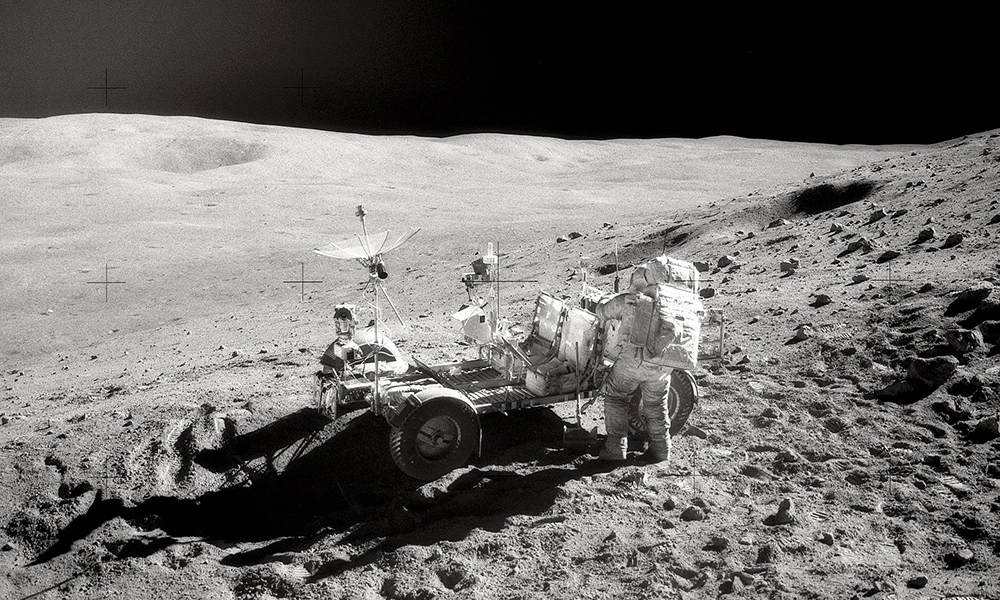