Japan — as in the country — has beef with the city of Glendale.

During World War II, the Japanese government forced about 200,000* women and girls into sex slavery to service its Imperial Army, almost all of them taken from Japan’s occupied territories, including, but by no means limited to, Korea. In 2013, Glendale erected a memorial to these comfort women in its Central Park, a bronze statue of a Korean girl sitting next to an empty chair.

This statue — a 1,100-pound symbol, to be sure, but still just one statue in one city in a country that is not Japan — has been the subject of a lawsuit since 2014, brought by a fringe group of Japanese and Japanese-American Glendale residents suing the city for its removal. (A comfort women memorial in San Francisco has also been met with resistance, most notably from the mayor of Osaka, San Francisco’s sister city in Japan.) The suit has been dismissed at every level, and was just denied cert by the Supreme Court on March 27. On February 22 — two weeks after right-wing nationalist Prime Minister Shinzo Abe golfed with Donald Trump — Japan filed an amicus brief with the Supreme Court, in support of the appeal. It claimed, “The Comfort Women Memorial in Glendale City interferes with and is a departure from established diplomatic policy.”

Basically, the statue pissed off a bunch of revisionist Japanese people, up to and including the Japanese government, and they mobilized to get it taken down with a completely specious argument — that by erecting a war memorial, Southern California’s very own Glendale is engaging in foreign policy. Incidentally, the US has already recognized Japan’s war crimes, including those against comfort women, in House Resolution 121, in 2007. So all Glendale has done is put up a memorial consistent with the US government’s established position on comfort women.

I first heard of this case in 2014, when white shoe law firm Mayer Brown got some heat for representing the plaintiffs, who call themselves the Global Alliance for Historical Truth (GAHT). (Not to make this about me, but I wrote a whole book about this lawsuit, though since I’m a novelist I masked my Korean rage by turning it into a story about Armenian genocide denial; I called my fictional law firm “Thayer White” because I was too lazy to change the placeholder name, and also, fuck Mayer Brown.) Mayer Brown withdrew because of the bad press, which means the money was good until it got expensive (see also, Simon & Schuster). GAHT is now represented by William Benjamin DeClercq of the DeClercq Law Group in Pasadena — less than 10 miles from the Glendale park — a small law firm where their money is still good.

I don’t really practice anymore, but I’m a lawyer with a lawyer father, a lawyer husband, and several lawyer friends. I’ve never bought into the idea that lawyers are greedy liars, and I think it’s more obvious now than ever that lawyers are a fundamental part of a fair and functional society. But you know what? Some lawyers are mercenaries. DeClercq is doing his part to keep lawyer jokes alive and relevant in 2017.

I’m guessing William DeClercq has a fair amount of discretion with regards to the cases his firm, the DeClercq Law Group, decides to take on. This was not a criminal case — there was no need for this lawsuit to exist, and GAHT did not have the right to legal representation. They paid DeClercq, and he fought their bullshit lawsuit on their behalf, saying Glendale “adopted its own foreign policy which favors the view more favorable to Korea,” complaining that “the monument remains along with its permanent words that accuse Japan of wrongdoing on a basis that it strongly denies.” Of course, even though DeClercq went after a memorial to 200,000 rape victims at work, his personal Twitter is a lesson in bland white liberalism, with quotes from MLK and Rosa Parks, and hashtags like #ShePersisted and #Resistance.

I mean I get it, man. It’s hard not to be a hypocrite, especially when people are throwing money at you. But as DeClercq has clearly figured out on some level, this is a time to step up and define yourself. Trump is such a raving idiot monster that he makes people long for the days of W. — you might let a lot of shit slide if you feel like one of the good guys just for voting against him.

Trump didn’t invent lying, or misogyny, or racism, or bad hair. He just combined all of these elements into one viral package. Most of us don’t buy it (historically low approval ratings, and let’s not forget his decisive loss of the popular vote), but that doesn’t mean we’re not complicit in some of the systems that led to his rise to power.

Shinzo Abe has been promoting alternative facts for the entirety of his political career. He’s championed revisionist textbooks that downplay and omit Japan’s war atrocities; he pressured NHK, the PBS of Japan, to censor a program about comfort women back in 2005, when Trump was a mere 59-year-old boy exchanging locker room talk with Billy Bush.

The Glendale lawsuit isn’t big news in 2017 — it’s a petty feud, one that doesn’t involve our president. But it’s the kind of thing you’d expect from a thin-skinned autocrat with a need to control the narrative in the face of damaging facts, and it’s being pushed by a Hillary-supporting lawyer in Southern California (though I suppose there’s not much left to do for Mr. DeClercq but collect his silver, now that cert has been denied). It’s not enough to hate Trump — hate without resistance is useless. To resist Trump, we have to resist the preexisting evils that inflated his empty suit. And sure, Trump isn’t the one fighting Glendale over a war memorial — but when you’re a blue voter suing to minimize mass rape, what, beyond the odd tweet, can you have left to give?

*The number is heavily disputed, and can’t be verified, as the Japanese government torched incriminating records at the end of the war. 200,000 seems to be the most cited figure, though estimates run from 20,000 (or zero, I guess) to over 400,000. 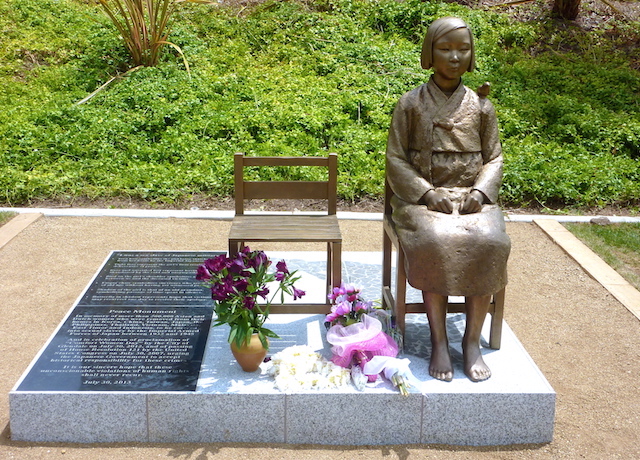