I had never heard of poet Frank O’Hara until four months ago, when he wandered into my life by way of a friend. One night over drinks, I ask that friend how he hears the last two stanzas of the first O’Hara poem he ever showed me, “Morning,” which features breathless, unnatural line breaks. I pull up the poem on my phone and slide it across the table, asking him to read the stanzas aloud. He complies, quiet but earnest:

were numerous and today

snow is their calling

card I’ll not be cordial

there is nothing that

distracts me music is

only a crossword puzzle

do you know how it is

when you are the only

passenger if there is a

place further from me

I beg you do not go

I watch his lips part to read each word. I admit I fell irrevocably for him when he reached that last line break, which he enunciated with a rumbly murmur — “if there is a / place further from me / I beg you do not go.”

Then he shows me his favorite of O’Hara’s poems, “Why I Am Not a Painter.” He muses over the poem for a moment before handing his phone to me. He watches me read it silently, my eyes flitting back and forth, and he searches for my response. The poem does not move me, I tell him, but it delights me to see that it moves him. Of course, in truth, it more than delights me — it changes me. I had just fallen in love thanks to Frank O’Hara.

After that night, O’Hara begins popping up everywhere. First, he shows up in my favorite weekly column, film critic Sheila O’Malley’s “Present Tense,” which reflects on the intersections of film, literature, art, and culture. The first week of May, O’Malley writes about “Frank O’Hara at the Movies,” chronicling the poet’s deep and well-documented love for the silver screen. She begins her column with an epigraph from O’Hara’s poem “To the Film Industry in Crisis”: “You, Motion Picture Industry, / it’s you I love!” Suddenly, O’Hara and I share more in common than I initially thought; he’s a poet who writes about film, who loves actors and movies as much as I do and without shame or pretension. I want to sit down with him and ask him his favorite films and film stars. I bet he has great taste.

“Movie stars traipse through O’Hara’s poems,” O’Malley writes, “used as comparison, wielded as similes, or showing up as they show up to all of us, as looming public figures.” Indeed, Ginger Rogers, Elizabeth Taylor, and James Dean all make appearances in O’Hara’s poetry. And it is in O’Malley’s column that I discover my very favorite O’Hara poem, “Lana Turner Has Collapsed,” in which O’Hara sees a tabloid headline reporting that Turner, one of his favorite starlets, has just recently lost consciousness at a Hollywood party. Its final lines go like this:

and suddenly I see a headline

there is no snow in Hollywood

there is no rain in California

I have been to lots of parties

but I never actually collapsed

oh Lana Turner we love you get up

With that last line, I picture Romeo, hunched over an unconscious Juliet — “O my love!” I adore all of it — his unabashed grief, his genuine love, his gasping rhythm. Quickly, O’Hara becomes a staple of my poetic diet.

Then, O’Hara comes up over and over in my copy of Heather Christle’s The Crying Book, which I start reading in July. First, Christle invokes O’Hara as she considers the act of crying in the nude: “It is especially hard to witness a person crying naked, like Frank O’Hara ‘standing in the bathtub / crying. Mother, mother / who am I?’ Crying is its own nakedness and to see both kinds at once elicits a panic of pity.” O’Hara’s emotional transparency prods at my chest until it finally punctures me — he cries, naked, in the tub, like I have before, and yearns for his mother at his lowest moments. I want to cut through the poetry and clothe him, kindly.

And again, in that same book, Christle recalls an email exchange with a friend she recently lost to suicide, summoning O’Hara yet again: “Once [my friend] wrote to tell me he was memorizing ‘Steps,’ one of his favorite Frank O’Hara poems, which flits its way through New York, watching dancers in the park”:

the Pittsburgh Pirates shout because they won

and in a sense we’re all winning

In August, at the bottom of a Wikipedia rabbit hole, I discover Jasper Johns, an American painter, sculptor, and printmaker. His work doesn’t particularly affect me, until suddenly I discover the piece that changes everything — oil paint on two canvas panels hinged together. Dark grey and blue strokes that make the abstract shape of an American flag. A spoon and fork tacked to the center of the left panel. The work’s title: “In Memory of My Feelings – Frank O’Hara,” 1961. I learn Johns and O’Hara were good friends. I find there is an O’Hara poem of the same title. With his title, Johns borrows O’Hara’s language to ascribe meaning to his own visual expression: “My quietness has a man in it, he is transparent / and he carries me quietly, like a gondola, through the streets.”

Soon a chasm opens and Frank O’Hara appears again and again in Johns’s oeuvre. “Skin with O’Hara Poem” is a lithograph, with smeared imprints of the artist’s face and hands on a large, cream-colored sheet. In the corner, a poem in courier print — “the clouds go soft / change color and so many kinds / puff up, disperse / sink into the sea.”

“Memory Piece (Frank O’Hara)” moves me to tears. The sculpture was completed four years after O’Hara’s sudden and untimely death in 1966, and it is the most striking artistic elegy I have ever seen. “Memory Piece” is a wooden box with three small stacked drawers; in each drawer is a layer of sand, taken from Edisto beach in South Carolina, where Johns had a studio that O’Hara visited in the summer of 1961. Inside the lid on top of the box, is a rubber impression of Frank O’Hara’s foot. When the top lid is closed, the footprint is impressed into the sand, making a footprint; the drawers allow for footprints to be stored and saved.

“Memory Piece” is an interactive memorial, a chilling way to keep a lost loved one physically present, to fight against the sweeping sands of time. It is more than a mere memory piece — it is a memory machine, a footprint-maker that can conjure up the dead with a movement of the wrist. Heather Christle describes “Memory Piece” as Johns’ “bittersweet, faux-naive act of keeping his friend near, just barely gone, and then — as the sand inevitably settles — vanished.”

Now Frank O’Hara seems to go everywhere I do. He comes up in nearly every conversation about poetry, appears on bookshelves at every bookstore I frequent, weasels his way into my nightly thoughts. I’ve considered that this may simply be a trick of the mind — perhaps I didn’t see him there before because I did not know he existed. But I like to think O’Hara came to me at a particular moment — through a friend loved and lost — and decided to hang around for a while, sending me sporadic greetings through language and art. So, hello to you too, Frank. You found me when I was ready for you and pried me open to the world:

in a world where you are possible

nothing can go wrong for us 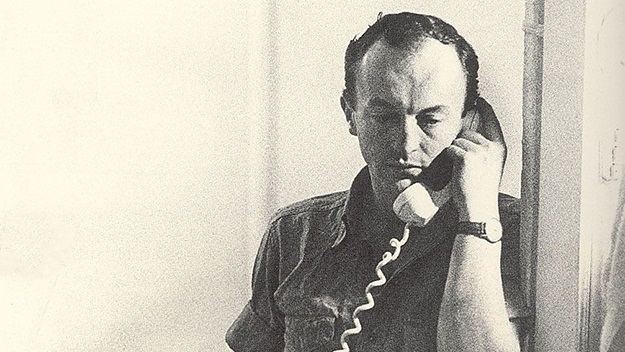