When will we see full-blown operas of the lives of tech billionaires? Operatic treatments of Jeff Bezos, Peter Thiel, Steve Jobs, Elon Musk, and Elizabeth Holmes practically write themselves. Their lives are as sensational as their fortunes, with more than enough power struggles, tragedy, adultery, passion, secrets, and betrayal to go around. No American businessman has been the hero of an opera since Colorado silver baron Horace Tabor, the subject of Douglas Moore’s The Ballad of Baby Doe (1956), whose tragic end involves William Jennings Bryan and a wrong bet on the gold standard. “The Social Network,” David Fincher’s film on Mark Zuckerberg and the founding of Facebook, might be considered the first tech-start-up rock-opera, with its score by Nine Inch Nails founder Trent Reznor, featuring Edvard Grieg’s In the Hall of the Mountain King.

I offer this advice freely to John Adams and Peter Sellers, who are still trying to fix their ho-hum California gold rush opera, Girls of the Golden West, panned when it premiered in San Francisco in 2017 as “directionless and unmemorable.” It offered itself as a “MeToo” opera about the plight of marginalized Californians past and present, featuring tales of women, Native Americans, and miners of color facing abuse and terror. Their slightly revised version opened in Amsterdam last month, still bent on rejecting “all the rosy myths you’ve heard about the Golden State. It is revisionist — or, rather, corrective — American history, a tale of men turning feral as they swarmed California like an invasive species.” It failed too.

Lots of people didn’t get rich in the gold rush and haven’t gotten rich yet. But audiences want a good story, and Alex Gibney’s recent HBO documentary on Theranos founder Holmes, The Inventor: Out for Blood in Silicon Valley, would make a better opera than Girls of the Golden West, especially with Holmes’s rich baritone. If Adams’ and Sellars’ goal is to be relevant to the current moment, why not balance dirges of disempowerment with a few high notes of success? While the stories of the voiceless are important, why not also give us a glimpse of the young dungarees entrepreneur Levi Strauss, whose company is just now going public? Or “Wheelbarrow Johnny” Studebaker, who made a mint selling carts to miners then jump-started a powerful family brand that lasted a century? Or Philip Danforth Armour, who made $8000 building sluices, went back to the Midwest to start a meatpacking business that provoked Upton Sinclair’s The Jungle? Or Domenico Ghiradelli, who came straight from Peru to open one of the earliest shops selling goods — including sweets — to miners? Or Henry Wells and Williams Fargo who saw a transportation future in California over the objection of their board of directors at American Express?

For my money, Adams and Sellars should simply start their libretto at the beginning, with John Sutter: good looking, self-made farmer and rancher, visionary entrepreneur, raconteur, legendary host. By 1848 Sutter was internationally famous for his wealth and for his role in attempts to rescue the Donner Party. But when gold was discovered on his property he couldn’t pivot. His property was overrun, fences destroyed, streams diverted, and farmland ruined.

He should have had a bigger moat.

In ten years Sutter had lost almost everything. His downfall was swift, tragic, and instructive for any Silicon Valley founder today.

Sutter — a rich man railing against disruption — is the tragic central character of the California gold rush. Only opera would do his story justice today. The French author Blaise Cendras penned a bestselling 1926 novel, Sutter’s Gold, which praised Sutter’s doomed vision for a peaceful, prosperous, pastoral California. William Faulkner spent years on a film treatment, as did Soviet filmmaker Sergei Eisenstein. Both were ambivalent about capitalism and innovation; neither could get financial backing for their projects. Universal Studios came out with a treacly version in 1936, which bombed. Sutter’s Gold was Universal’s biggest loss for decades.

But Europeans loved the Sutter story. The 1936 German film, Der Kaiser von Kalifornien, was a runaway hit, winning the Mussolini Cup at the Venice Film Festival for best foreign film. Adolf Hitler loved it. Considered the first Nazi Western, complete with panoramas of mountains and deserts, Sutter is a visionary superman who smokes peace pipes with Native elders and builds a prosperous “New Helvetia” until he is ruined by gold diggers (who are characterized, in the film, as Jews).

In America, Sutter’s name sank into oblivion. Adams and Sellars don’t even mention him. Instead they focus on Louise Amelia Clappe, a privileged, literary young woman just arrived from the East Coast, a strange choice for “woke” operatic intentions. Clappe was rebounding from a love affair, newly married to a sickly doctor who apparently couldn’t even perform a proper amputation. Clappe’s dramatic letters home, the basis for Sellars’s libretto, were written with the hope that they’d be read to (or forwarded to) her former lover. She missed the broader narrative. She even ignored the rich cross-dressing, all-male camp culture that would come to characterize San Francisco. Girls of the Golden West is mostly a litany of her complaints, in C flat minor.

Most of today’s entrepreneur-founder stories have gold-rush analogues. The tale of the Chilean miners, featured in Girls of the Golden West, was a new-tech success story turned tragic. The Chileans, some of the earliest to arrive, began sifting gold in dry areas using mercury, beating out the amateurs who were swirling creek gravel in pans and picking out specks that glittered. The Chileans were tortured and driven out not because they were dark skinned but because they were better than everyone else. Soon everyone was using the Chilean methods.

The California gold rush was a series of disruptions: new technologies, new forms of payment, and new communication networks. It brought riches to enterprising young men ready to risk everything they owned. It was also tragic, catastrophic, heartbreaking, and endlessly repeating. The literal gold rush gave rise to the metaphor.

The California gold rush clearly needs an opera. While the Klondike gold rush of 1896 gave us Jack London’s Call of the Wild and White Fang and Charlie Chaplin’s film The Gold Rush, all we have from the California gold rush are two short stories, Mark Twain’s “Celebrated Jumping Frog of Calavaras County” and Bret Harte’s “The Luck of Roaring Camp.” Both take place decades after the rush and neither is about getting rich.

Who will write the first Founder’s Opera? Walter Isaacson might look into selling the rights to his biography of Steve Jobs, whose signature look famously included Levi’s 501 jeans. 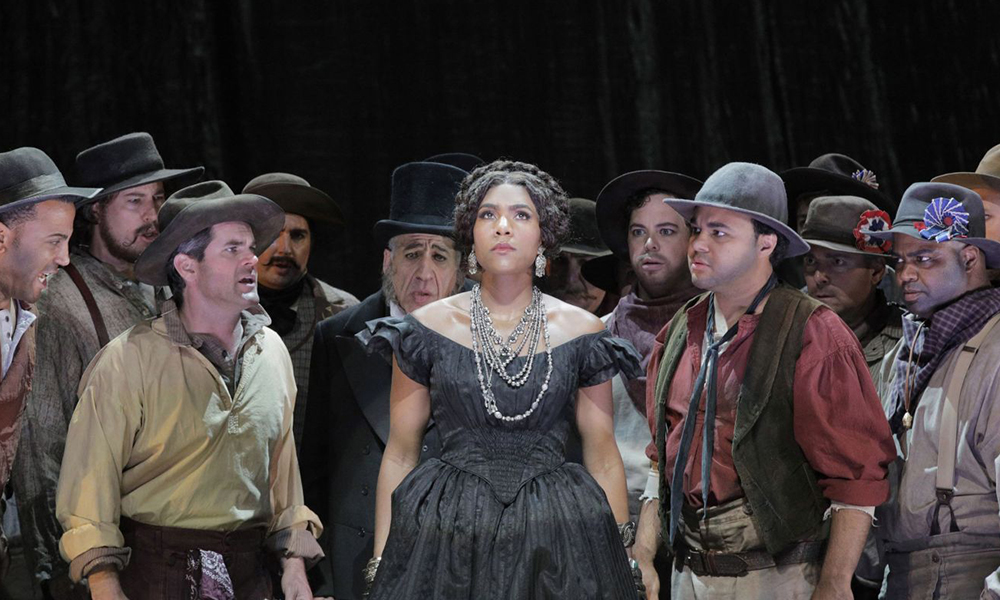