Over the past summer, whatever’s left of the Los Angeles County Museum of Art’s film program screened a number of films in their “Final Cut” series, which was devoted to great directors’ last films. The series also functioned as a goodbye of sorts to the Leo S. Bing Theatre, which, like rest of the 1965 campus designed by William L. Pereira, would be demolished to make way for Michael Govan and Peter Zumthor’s hotly-contested incarnation of LACMA, if that plan reaches whatever the highest level of approval may be. Perhaps destruction by wrecking ball of the Bing Theater is not a fait accompli. I hope it’s not, although Govan’s ability to get what he wants approaches a Shakespeare villain’s. Zumthor’s plan has a screening room half the space of the Bing, which says more about Govan’s priorities vis-à-vis film at LACMA than it does about Zumthor’s design skills.

In any case, one night in late June, my wife and I went to the Bing to see Japanese master Yasujiro Ozu’s final work, An Autumn Afternoon (1962). Perhaps the film, described in the Criterion Collection as “a gently heartbreaking story about a man’s dignified resignation to life’s shifting currents and society’s modernization,” was screened last to encourage the attendees’ “dignified resignation” to the Bing’s demise. To me, it seemed like a film about how architecture determines human identity.

The retired Tokyo businessmen of Ozu’s film dwell in cramped apartments with the daughters or wives; without an office to go to, these men become reduced versions of themselves. Most of the film’s spaces are confined, even the golf course surrounded by nets atop a building where one of the younger men goes to blow off steam. The film’s dilemma — should the main character marry off his daughter, who is approaching an unmarriageable age, and sacrifice his own comfort — is not much of a predicament for the daughter, who is just going to move from one servile position to another, in another hemmed-in apartment. Ironically, these thoughts occurred to me in the Bing Theater, which has always functioned as a space of imaginative freedom for me. If architecture does determine, or at least affect in some way, one’s identity, then the Bing’s screen has opened my mind to new worlds — the many realms of Sergei Parajanov’s Shadows of Forgotten Ancestors (1965), an wildly mythic treatment, epic in scope, of Ukrainian Hutsul culture, or the wintry French countryside that closes in around an increasingly desperate female drifter in Agnès Varda’s Vagabond (1985).

It’s not just the films that have changed me, but the spaciousness of the 600-seat Bing Theater itself, with its gently curving seats at a slight incline, the bright red curtain that rises at the beginning of each screening, and the screen itself, which can accommodate 70, 35 and 16 mm film, at virtually any aspect ratio. It’s even a pleasure to go to the men’s bathroom, which is right next to the projection room, and catch a glimpse through the half-opened door at the projected film’s brightness as it streams screenwards from the booth. Although I’d recently attended events where the Bing was filled to capacity — most recently a screening of the newest cinematic King Lear starring Anthony Hopkins, with Sir Anthony in attendance, all eyes on his rakishly grizzled face and black leather jacket — this Ozu screening was more typical of an evening at this theater. Scattered across the theater, far fewer than even half its capacity — here I realize I may be making Govan’s argument for him — sat the typical art house crowd for which I have so much affection, ranging from natty hipster filmmaking and film studies students to aging cinéastes with unkempt white hair, the possessions on their laps in ratty plastic carrier bags, and, in this case, well-dressed older Japanese-Americans who might even have seen the film in 1962.

I’ve been saying goodbye to film at LACMA for years now, ever since Govan pushed out the museum’s longtime film curator, Ian Birnie. From the late 1990s until about 2011, I took advantage of Birnie’s encyclopedic knowledge of film. He and his staff programmed a brilliant series called “Fassbinder and His Friends,” which paired rarely-seen films, like Max Ophüls’s Caught (1949), with Fassbinder films such as Martha (1974) and Lola (1981) — themselves hard to see in a theater — that bore their influence. When Birnie hosted a series of the films Luis Buñuel made in Mexico, it was programming-as-outreach: I’ve never heard as much Spanish spoken at LACMA as I did at the screening of those films, which I’ll probably never see on celluloid again. Even Martin Scorsese protested Birnie’s ouster, but Govan has the brilliance of a rapier-wielding high-level courtier, and just waited the controversy out. His own vision of a film program involved, big surprise, celebrity curators, who did some programming, had some so-called “table reads” before moving on, as celebrities do, leaving the “film program” reduced to Tuesday afternoon (?) screenings of classics you can see on TCM.

But even in the post-Birnie era, the Bing has felt to me the way I imagine church feels to the devout. I went to all the Stanley Kubrick screenings that went with the exhibition, and fell in love with Barry Lyndon (1975), a movie that defines the big-ness of the “big screen”; that terrible duel between Barry and his stepson’s been imprinted in my mind ever since. However, even as I relive my favorite movies seen at the Bing, reports from today’s City Hall meeting come through on social media. At issue: the airspace above Wilshire that Zumthor’s LACMA, with its 300-seat movie theater, would occupy. @esotouric reports, “Done deal, just like the Board of Supervisors, City Council members parroting LACMA talking points, can’t wait to give away our precious Wilshire airspace. LACMA crew celebrating so loudly in chambers they had to be shushed.” An autumn afternoon indeed. 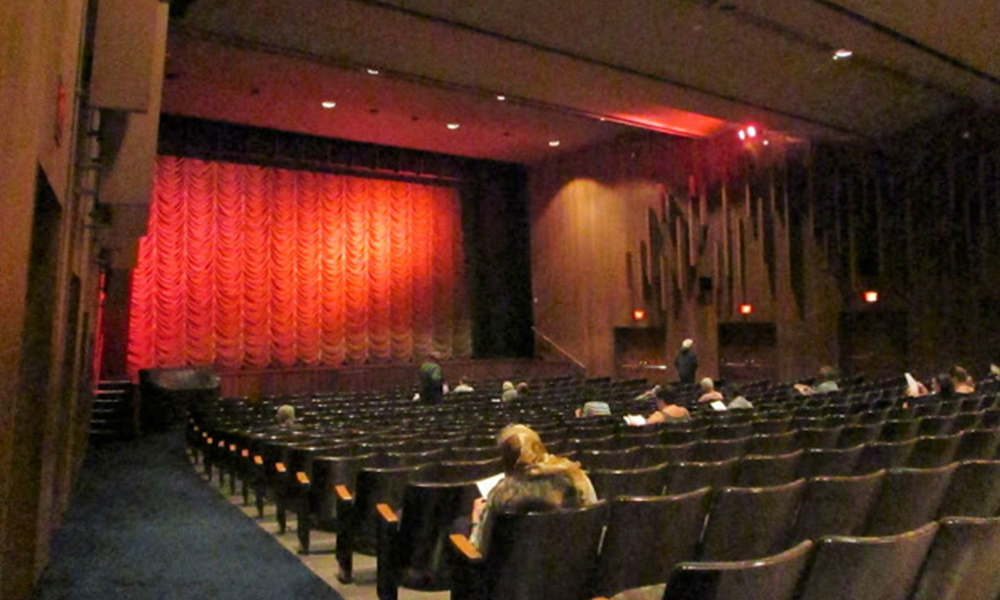