Robert Stephenson’s book about Moscow immediately after Russia’s establishment of its independence in 1991/1992, on the dissolution of the Soviet Union, relies on the combination of a concise written account of his experiences on the ground at the time with an array of photographs of Moscow and its people. The effect is to take us back to an era of great difficulties, but also to a period when it seemed to many that a real change was in prospect. “Capitalism” is an imprecise concept, and Stephenson’s title for his book, We Are Building Capitalism!, may have been intended primarily as an ironic reference to the then familiar Soviet slogan “We Are Building Communism.” But the general tone of his presentation mirrors a relative optimism prevalent in those early years of transition. Today’s readers will want to consider how far the system set up by today’s Kremlin has moved towards credible and sustainable capitalist norms. The past weighs on every country for good or ill — as those of us in the United States and the United Kingdom feel acutely at the moment. It was inescapable in the Yugoslavia I experienced in 1975-9 and certainly so in the USSR/Russia I lived in for some ten years (1964-6, 1979-82, and 1995-2000). One can feel the past in a country’s buildings and its statues, for example. Stephenson records a number of the Soviet hotels that used to grace Moscow, like the Moskva or Intourist: heavy, flat, and unwelcoming. His photographs also include a number of Soviet statues, some now broken and discarded, some still in place. The great men cast in concrete and bronze for public admiration are uniformly presented in imposing bulk, the one almost indistinguishable from the next. Lenin, like so many of the rest of those accorded public recognition, had blood on his hands, but many of his statues are still in place, in an easily recognizable series of standard variations, like the pensive prophet in the photograph below. Stalin is making a comeback now. Stephenson’s record includes more recent public commemorative monuments, including those by the Tbilisi-born sculptor Zurab Tsereteli, a favorite of Moscow’s long-serving mayor, Yuri Luzhkov, who entered office in 1992, under Yeltsin, and left it in 2010, under Putin. The Soviet impact on Tsereteli’s work is evident, for instance, in his large tribute to Peter the Great set up in the Moscow River, reported to have been rejected as a proposed tribute to Christopher Columbus for Columbus, Ohio. As a disproportionate muddle it is surely unequaled. But Mayor Luzhkov was happy to pay for it. Being in with the powerful paid off in the Soviet Union and its Russian successor — and, to be fair, public taste for Socialist Realism is still a factor in Moscow. The collapse of the Soviet Union was inevitably seen differently in Russia from the way it was seen in those other formerly Soviet entities that became independent. Moscow was happy enough to turn to Yeltsin in 1992 but the country had no sense of being renewed or liberated. The Russian Federation was, after all, the main component of the former USSR. It was not altogether surprising that, as Stephenson records, there was a religious resurgence, in part in the search for a Russian identity. Church buildings were recovered for the Russian Orthodox Church, and Stephenson duly captured the restoration with his ever-ready camera. He also noted and photographed marches by those still attached in one way or another to past Communist certainties, and briefly recounts the contest between the Russian Duma parliamentarians and President Yeltsin that ended with the shelling of the parliamentary “White House” in 1993, and the constitutional changes that followed it by the end of that year, establishing a powerful presidential structure.

The years surrounding the final collapse of the Soviet Union, following Gorbachev’s doomed effort to change it from a single-party state with dictatorial powers into one still guided by the center but more humane and more flexible, were tough, to put it kindly. We Are Building Capitalism! records that imaginatively, and with respect for the way that the Russian people lived through the ordeal. There is one photograph of police waiting for instructions during City Day in Moscow in 1993 and another of troops waiting in trucks during a day of protests that same year. But Stephenson wanted first to rely on what he saw and could record personally, and, second, it seems to me, to convey a sense of how things were for ordinary people. He was surely helped in that by his eventual marriage to a Russian woman, and his apparently satisfying work with Russian colleagues at a newly established Federal Employment Service and, subsequently, leading a major UK-Russia joint-funded program of capacity-building for Russian trainers in business and commercial skills. Stephenson has not said so in his book, but he would not be the first to recognize that, however rough the overall situation may be, there is courage and worth in very many individual Russian people. What seems — and often is — extraordinary and even dangerous from the outside can soon become quite normal once you are living in it. Reminders of a long line of people selling goods on the street, a woman selling a few flowers, traders selling privatization vouchers, and supporters of the MMM pyramid scheme that ruined so many, respectively, demonstrate the everyday crisis that so many Russians had to live through. But Stephenson does not cover the violent criminality that was also rampant in Russia both before and after the first years of independence, with lasting effects on the country today. Stephenson’s book is, finally, notable for the picture he presents of what Moscow is really like — was like then, at least. Now its streets are a permanent traffic jam, and most of the cars are foreign. But for anyone who knew it then, and has the patience to walk around it now, there are beauties or sadnesses to remember or discover in Stephenson’s photographs: scenes along the river, for instance, or Red Square and the Kremlin, the Uzbekistan Restaurant, dancing in Sokolniki Square, the Tretyakov and Pushkin Galleries. The current Moscow Mayor, Sergey Sobyanin, has done a great deal to change the physical amenities of the city, in order to make it comparable to other European capitals, one hopes without destroying its innate characteristics in the process. Moreover, the construction of a major financial district within Moscow’s boundaries has been completed.

That last point brings me back to the question raised at the beginning of this review: has capitalism in fact been built, given all that has happened since the possibility of transition was opened up in 1992? Moscow is not yet a financial center of consequence. Investment in Russia, whether domestic or foreign, is low, while capital outflow remains a problem; GDP growth is below 2% per annum; the small-business sector is small, with state-owned business still dominant; the courts and the Duma are subject to the interests of the Kremlin; and corruption remains corrosive. The case that Russia is more of a kleptocracy than a market economy has been set out recently, for those who might need persuasion, in Anders Aslund’s Russia’s Crony Capitalism (Yale University Press, 2019). Russia may no longer be subject to a command economy of the traditional Soviet type, but neither is it operating as a capitalist economy on anything like the model those working on reforms in 1992 had hoped for.

President Putin cannot legitimately remain in the Kremlin on finishing his present term of office in 2024. He could find a way to do so anyway. That possibility lies behind the protests that have shaken Moscow in recent weeks. Popular pressure for Russia’s rulers to pay serious attention to the domestic needs of their subjects is on the increase, while the fear of those rulers that economic or political change will lead to their fall has risen in tandem. Putin knows what happened to Gorbachev. Stephenson illustrated the way that building capitalism in Russia began. Another go at it could be harder, but staying where Russia is might be worse.

Robert Stephenson is a former UK senior civil servant with over 35 years of experience working in public administration, including twenty years in international development. He began his international career in Moscow in March 1992 and spent the next five years living and working in the city as a consultant to the new Federal Employment Service, and then leading a major UK-Russia joint funded program of capacity building for Russian trainers in business and commercial skills. Since leaving the service he has concentrated on developing his lifelong passion for travel and photography and his first book is We Are Building Capitalism! Moscow in Transition 1992-1997 (Glagoslav, 2019). 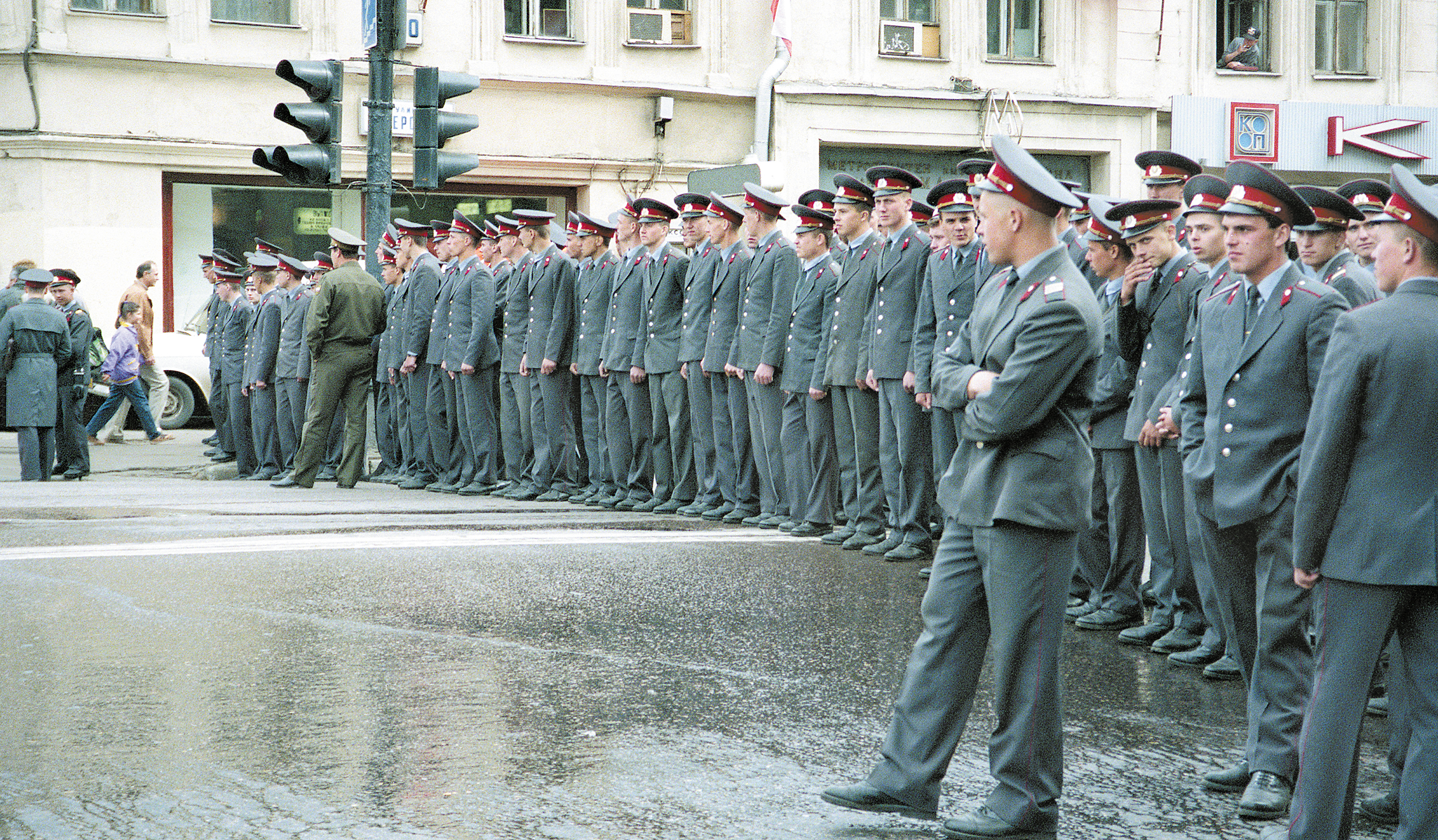