“Who’s that?” my publisher said when I told her that Charles Bowden was writing the preface of the new edition of my book, Twentynine Palms. I wasn’t totally surprised by the reaction. Even people who should know about Chuck’s work sometimes don’t, and that was 11 years ago, when his article “Exodus” had just come out in Orion — another classic Bowden account of chaos on our borderlands, and one that, rightly, was generating a lot of conversation.

Nevertheless, I was hurt on Chuck’s behalf. He was — and still is — a writer whose name should not trigger that response among publishers of work about the modern West. To that end, a tribute to his life and literary endeavors has just been released called America’s Most Alarming Writer. At the time of my conversation with my publisher, he had generously agreed to write what I needed quickly to meet a stepped-up publishing schedule. That meant a great deal to me, for a range of reasons, not least of which was that in Chuck, I had found a kindred desert pilgrim — and his literary journey had helped blaze the trail for mine. Plus I liked him and loved his work.

Which leads me to an aside about blurbs: sometimes publishers have asked me to request endorsements or have offered to try to secure endorsements for my work from authors who are well-known but whose writing I am not crazy about. To the publishers’ dismay, I have declined these disturbing requests. Why should my work carry the weight of approbation from writers whose work means nothing to me? Moreover, it would not be fair to the writer. Chuck was a scribe who fit my bill. He appreciated what I was writing, and vice versa; he was sympatico with the plight of my characters; and he understood how the promise and failure of the American dream played out in our wide open spaces. I was honored to include his preface for the new edition of Twentynine Palms, even if I did have to explain to the publisher who he was.

But truth be told, I myself didn’t know about his work when I first headed down this fork on my literary road. I was en route from writing comedy to writing tragedy, for a range of reasons, all of which had to do with a skin falling away, losing the need or even the ability to have instantaneous reactions, a requirement of being funny. These are features that the desert — a land of little response — was foreclosing, to my everlasting good fortune. This is not to say that the desert isn’t the ultimate joke — on me, and everyone else.

It was while looking for an agent to help me along this new trail that I found out about Chuck and his work. I refer to Kathleen Anderson, his representative, whom I met at the home of a writer in New Mexico, a friend from college, who was also seeking an agent at the time, and Kathy was there for a meeting. I explained to Kathy that I had been wanting to take my writing in a different direction, and in particular, there was a book I was longing to write. It was set in the desert, a town called Twentynine Palms, and was about two girls who had been killed by a Marine after the Gulf War. I had been wandering the Mojave for years as a way to flee Hollywood and myself and now a story was calling me and I had to tell it.

Kathy and I spoke of writers we admired and at some point Kathy asked me if I knew about Chuck Bowden, whom she represented. Coincidentally (not that there are any), a friend had just given me a copy of Chuck’s book, Blood Orchid, and I was reading it at the time. She recounted an experience in which she had recently visited Bowden in the Sonoran Desert, trekking around with him for a few days and getting an inside look at Chuckworld — not her term, mine. This was by way of explaining that she “got” the desert and could understand why I was spending more and more time there and was moved to tell the story I had mentioned. Here was someone who was not scoffing at writers — and regions! — west of the Hudson, although she was based in New York, and was interested in helping me bring my desert secrets to the bazaar. To that end, she gave me a couple of Chuck’s books. I read them as soon as I could. From then on, I was a goner, and he joined the pantheon on my shelves. Some time later, after he had blurbed the first edition of Twentynine Palms, we met in person and became friends, with an assist from his then-partner, Mary Martha Miles.

I’ll never forget that first meeting. I had flown to Tucson from Los Angeles for the book festival, and Mary Martha and Chuck had invited me to stay at their house. I rang the bell and Chuck opened it wide. He was big and rangy, which I had kind of suspected from photographs, but also had what I guess might be called a commanding presence, in the way of men who are not only comfortable in their skin but are also leaders of the pack. As I extended my hand to shake, he scooped me up in his arms and said “Author.” That was something I wasn’t prepared for — not the hug, which, as hugs go, was an outstanding one — but being greeted with that term. Of course I was an author, but have long preferred the term “writer,” “author” always reminding me of Jon Lovitz and his “‘I’m an actor’-with-an-emphasis-on-actor” Masterpiece Theatre routine on Saturday Night Live. Yet there I was — in the arms of a literary hero, a man who had once written lovingly about a rattlesnake named Beulah, well aware that she was an avatar of the Garden. It was a perfect moment, and for as long as it lasted, I was happy to be an “author.”

As I later learned, Chuck provided endorsements to many writers — “too many” I’ve heard some say (though of course not the people who don’t know who he is). Sometimes, these quotes took the form of the cryptic “in a class by itself,” which he used to say about writers whose work he wasn’t crazy about but who had asked for a blurb. Yes, that’s funny, but Chuck — who once described newspapers as vehicles for ads — knew that writing was a racket. But behind the bluster, he knew there was so much more. He wanted to help anyone who put the word on the page, be they of good heart. For the record, I’d like to say that his backing of my work helped launch it and continues to guide it along the path — and I hope I was able to convey that to him when he was alive.

In the past few years, a number of people who have blurbed my books have passed away. It started with a couple of people before Chuck, then Chuck, and then two more after that. I’m starting to wonder if blurbing my books is a curse — or just a generational marker. Like Bowden, the people I’ve asked to provide such “certification” are literary heroes of mine. But of course, idols are fallible, and have not reached the heights on their own — though often some would like to think so. Chuck was fortunate to have very capable women around him throughout his time on this plane. They helped him keep track of his work — all of the revisions, the edits — and managed his life up to a point. One of the last times I saw Chuck was when he was falling down drunk at the Tucson Book Festival (subsequent to the festival I mentioned earlier). He had tumbled down some stairs and hit his head. He was dazed and lying in a heap — not the way we view our heroes. Katie Lee, another colossal figure whose life and work was dedicated to being in and bearing witness to the American West (she passed away a couple of years ago — and no, she didn’t blurb any of my books), and I tried to administer aid until paramedics arrived. “I hope you’re not planning to write what Chuck writes,” she once said to me. “All this blood…”

My final experience with Chuck happened for exactly that reason. We were on a panel together at the Los Angeles Times Book Festival. It was called “Life on the Edge: Violence in the West.” Chuck was at his finest, and I was glad he was there. Not just because I enjoyed his company and his comments deepened the conversation, but someone who had been stalking me was front and center in the first row. I passed a note to fellow panelist Nick Schou and asked him to keep an eye on the situation. Here was life on the edge in spades, and I figured that if anything happened, Nick and moderator Marc Cooper — scrappers all — would have pitched in, along with Chuck, who would also have written the hell out of it. Or blurbed the guy’s next book.

In any case, the panel concluded without a problem. Later, I walked with Chuck and a representative from his (and my) publishing house to the parking lot. He seemed kind of fit and content and said that he had stopped smoking. Or maybe it was drinking. He had stopped something, as I recall. He was heading back to the desert to write, he said. He’s still out there somewhere, down by the river, along with the creatures whose lives he recounted — and if I get still and quiet, I’m pretty sure I can hear Beulah’s rattle as she travels the sands with Charles Bowden, her great ally and protector. 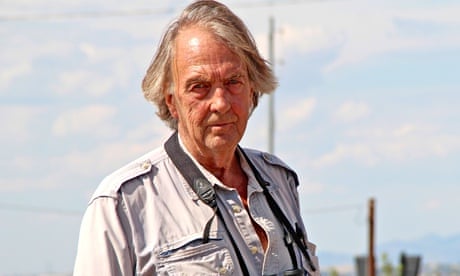