Just after 10 p.m. on Sunday, October 1st, Stephen Paddock opened fire on the Route 91 Harvest Festival from the 32nd floor of the Mandalay Bay Resort and Casino. At least 59 people were killed and over 500 were injured in what has been called the deadliest mass shooting in United States history committed by a single individual. Surprising no one, a rancorous debate immediately ensued with many on the left calling for gun control legislation and a unified right feigning moral outrage.

Senate Majority Leader Mitch McConnell appealed for restraint, arguing that it was “particularly inappropriate” to politicize the shooting. Sarah Huckabee Sanders similarly dismissed the call for debate, noting, “I think that there will be certainly time for that policy discussion to take place, but that’s not the place that we’re in at this moment.” Laura Ingraham likewise referred to demands for gun control as “despicable,” decreeing that “there is not a government solution to every problem.” While many have thoughtfully responded to the events — Lena Dunham tweeted that “there was no way not to politicize” the shooting — in general, the arguments on both the left and the right have been as formulaic as ever.

Many will of course recall that these claims have long been recycled. Back in August, the Environmental Protection Agency faulted several scientists for attempting to “politicize an ongoing tragedy” for linking Hurricane Harvey to climate change. In 2016, following the shooting at the Pulse nightclub in Orlando, Libertarian presidential candidate Gary Johnson told Chuck Todd that it was “not a time to either politicize or jump to conclusions.” In 2012, conservative political advocate Grover Norquist accused President Obama of politicizing the Sandy Hook massacre: “We have got to calm down and not take tragedies like this […] and use them for political purposes.” For years, identical language and arguments have been used to demand moderation when an event has occurred that might discredit Republican policies.

While the left has vigorously opposed these insincere demands for restraint, their responses have largely remained wedded to the assumption that events are not intrinsically political. Writing on Hurricane Harvey for the New Republic in September, Emily Atkin voiced a common pro-politicization position: “Politicization must serve to hold public officials accountable for decisions they’ve made that contributed to deadly results.” Within her otherwise praiseworthy statement is the implicit suggestion that politics is an opt-in enterprise, a framework that must be applied from without. This is, of course, the right’s de facto containment position. Politics, they suggest, is the tawdry, self-serving province of those inside the beltway. Events, on the other hand, exist in the social realm and are independent of political gamesmanship. Rarely is there any indication of a necessary connection between the two or an intimation that politics might be a more than just policy. Max Read, writing back in 2012 for the now defunct Gawker, offered the rare exception to this stance, noting, “You cannot ‘politicize’ a tragedy because the tragedy is already political. When you talk about the tragedy you’re already talking about politics.” As Read suggests, the political is far more extensive than the formal procedures of governance and extends to the essential praxis of public debate and to the broad enterprise of public life.

Along the lines of Read’s argument, philosophers have exhaustively theorized an inherent relation between politics and real world occurrences through the concept of the “event.” While its application differs among thinkers, the term invariably conceives of epochal episodes as uniquely influential with respect to ontological frameworks, social mores, and collective action. In Event: Philosophy in Transit, Slavoj Žižek categorizes the event as that which breaks the conceptual mold, writing that the term can refer to “a devastating natural disaster or to the latest celebrity scandal, the triumph of the people or a brutal political exchange, an intense experience of a work of art or an intimate decision.” Regardless of an event’s specific character, Žižek posits that it always appears as something “miraculous,” defying reason, exceeding cause, and lacking explanation. As he claims, the event’s enigmatic nature calls forth innovative conceptual models and new ways of acting in the world. Tragedies and acts of incomprehensible violence fit this bill, challenging us to understand their existence and exhorting us to change our behavior. While Žižek is skeptical of the possibility of substantive events to occur in the mercurial context of late capitalism, he nevertheless suggests that events can neither be politicized nor simply left alone as they directly and necessarily influence how we understand the world and inhabit it.

Alain Badiou, a philosopher who has devoted his career to theorizing the event, similarly regards the concept as a disorienting intrusion of a foreign element into a world that displaces the prevailing order. In two major works, Being and Event and Logics of Worlds: Being and Event II, Badiou elaborates how events challenge ingrained beliefs and revolutionize human subjectivity. In his construction, the event splinters the logic of the heretofore coherent world and introduces a “truth,” a revelation that the extant ontological paradigm could not possibly have come to terms with. In the case of the event of Spartacus’s slave uprising in 73 B.C.E, Badiou contends that the truth of the event amounted to the previously inconceivable aspiration of slave revolt: “We slaves, we want and can return home.” Crucially, Badiou claims that emergent truths do not merely proliferate independently but require “fidelity,” what he frames as the living recognition that a specific truth has emerged. In his model, fidelity to the truth of Spartacus capacitated the later slave uprising in Haiti in 1796 in which Toussaint Louverture, “the ‘black Spartacus’” led the revolt against French dominion. Such a theorization, like that of Žižek, posits that the event need never be politicized as it already exists as a call for the subject to act.

From an entirely different perspective, Robin Wagner-Pacifici brings a sociological lens to the question of the event in her recent book, What is an Event?. Not dissimilar from leading philosophical accounts, she argues that events can hardly be considered apolitical as they are entangled in the manifold of human discourse and meaning-making, what she terms “political semiosis.” In their “performative” frame, Wagner-Pacifici theorizes that events involve a variety of utterances that “change the world of social identities, destinies, and relations.” She argues that, in the context of events, these utterances inform human relations and, perhaps more crucially, the construction of authority and agency. In what she calls the “demonstrative” frame, events conscript individuals as witnesses, participants, victims, and perpetrators, transforming the identities and destinies of those in their remit. Lastly, Wagner-Pacifici suggests that events include a “representational” frame in which “copies” of the event are exchanged, thereby codifying the event in public consciousness. While her conception of political semiosis is quite distinct from the characterizations of Žižek and Badiou, Wagner-Pacifici nevertheless offers the parallel argument that a given event is hardly a discrete phenomenon but rather is acutely linked to social and political life from its emergence.

To return to the question of the Las Vegas shooting’s significance, when viewed through the framework of the event, the attack cannot but be understood as already substantively political. From Wagner-Pacifici’s lens of political semiosis, the event’s links to discourse, framing, and circulation are abundantly clear. Performative utterances have been particularly salient with respect to the shooting, from the various speech acts during the attack directing crowds to disperse or shelter in place to those after the fact like GOP Senator John Thune’s advice for potential shooting victims to “get small.” The shooting has similarly gathered an appalling number of witnesses and victims who must now view their lives through its lens. The shooting has additionally been subject to countless acts of discursive (as well as political) reframing, not the least of which is Donald Trump’s reference to it as “an act of pure evil,” yet another apparent attempt to shelter the attack from any public or political interpretation.

Analyzed through the philosophical frameworks of Žižek and Badiou, the Las Vegas shooting also appears inextricable from political logic. To be clear, there are several rather technical reasons why the events of October 1st don’t fully meet the of the criteria for a true Badiouian event, not the least of which is that mass shootings are now dismayingly frequent. Nevertheless, when one takes stock of the extent of its violence, the attack emerges as darkly miraculous in demonstrating the fantastic power of one human the take away the lives of so many others. It could also be advanced that the shooting is merely an echo of a long-vanished event that has been chronically and disastrously ignored. The originary event might have been an obscure incident known as the “Walk of Death,” a 12-minute shooting spree in Camden, New Jersey, in 1949, the first instance of its kind to be committed by a lone gunman. That similar events have continued apace for nearly 60 years, with casualties keeping stride with advances in gun technology and liberalized access, would suggest that most of us have failed to register the inherent political significance of these acts or, as in the case of current calls for silence by the GOP, actively disregarded them. Badiou’s term for such figures, the slaves who turned their backs on Spartacus is “reactive subjects,” those who have said “no to the event.” In the contemporary political scene, it might be cynically put that reactive subjectivity has become the elective stance of the right in times of crisis.

On the question of politicization, if we take Žižek, Badiou, and Wagner-Pacifici at their word, the issue of the recent shooting in Las Vegas becomes less a question of whether to politicize the tragedy and rather one of how to grant the event its natural political significance. Continually, the right has succeeded in setting the terms and temporalities of what is suitable for public debate by delimiting what politics is and which subjects fall within its purview. The same is dispiritingly the case regarding the shooting in Las Vegas insofar as the right has stridently insisted that the attack is apolitical. Against such accommodations, those of us on the left must begin to recuperate an expansive sense of the political. In doing so, we ought to listen to the claims of Žižek, Badiou, Wagner-Pacifici, and Max Read, that events — and the event — bear an essential politics that need only be allowed to speak. 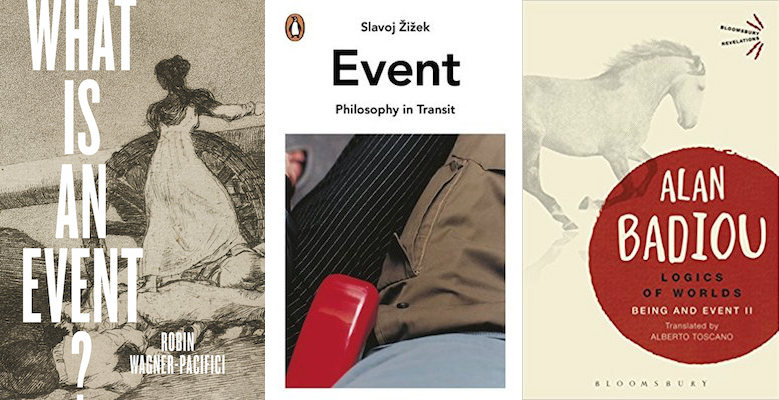