F.R. Leavis writes of George Eliot’s Daniel Deronda (1876): “There can be few who have read Daniel Deronda to whom the idea has not occurred of freeing by simple surgery the living part of the immense Victorian novel from the deadweight of utterly different matter that George Eliot thought fit to make it carry: it promises on first thoughts to be a pretty easily effected disencumberment.”

We’ve operated on another novel, doing the same “simple surgery” that Leavis suggests to “free” the portions of Charles Dickens’ Bleak House (1853) voiced in first-person by Esther Summerson, the novel’s protagonist, from the remaining half of the novel, which is voiced by an omniscient, third-person narrator. Leavis claims that Eliot “married together” “incompatibl[e]…spirits” in placing the Gwendolen Harleth and Daniel Deronda plotlines side-by-side. But when studied technically, the disparity between Esther’s narrative and that of the omniscient narrator comes through more starkly than does the discordant difference that Leavis perceives in Daniel Deronda. The two narratives in Bleak House exist in the same space without acknowledging each other, and without explanation as to who the omniscient narrator might be, or why Esther — who oft-bemoans the clumsiness of her pen — is writing.

To study this incompatibility, we exclusively read the Esther-narrated portions of Bleak House. The two of us — both working towards our PhDs in Victorian Literature — have read Bleak House before. But this time, we ignored, and even tried to forget entirely, the omniscient-narrated portions of the novel. We wanted to know if Esther’s portion could stand on its own, and seamlessly “work” as a novel by itself.

The short answer is yes. What became more a compelling question, as we continued to read, was not if but how and why Esther’s narrative manages to stand alone.

Bleak House focuses around Esther, an orphan who grows up with her godmother. When her godmother dies, she is sent to school by a benefactor who, once she has reached maturity, takes her and two other orphans in as his wards. The other two orphans, Ada and Richard, fall in love, and are both eligible for a giant inheritance, the identity of the recipient of which has been battled over in court for centuries. Esther learns, ultimately, that she is not an orphan, but instead the illegitimate child of a noblewoman. Hijinks ensue.

Despite its gaps, Esther’s narrative exists by itself rather serviceably. One reason for this may lie in the similarity between this novel and Charlotte Brontë’s Jane Eyre (1847). The parallels between Esther and Jane’s narratives are unavoidable: Esther and Jane both grow up under the strict eye of forbidding female matriarchs. They both wish they were better beloved by their nursery maids, who send them off to their respective boarding schools with dry eyes. Both claim to be unattractive, and both take on instructor-roles at their boarding schools. It is there that their paths diverge: while Jane gets her summons to Thornfield Hall, Esther is instead called to be a companion to Ada Lovelace, another ward of John Jarndyce of Bleak House. From here, the novel has some striking similarities to Elizabeth Gaskell’s Mary Barton (1848), notably a murder by gunshot, a courtroom drama, and the death of a beloved fallen woman who acts as a maternal figure to the heroine.

Of Bleak House, Charlotte Brontë writes: “I liked the Chancery sections, but when it passes into the autobiographical form…it seems to me too often weak and twaddling; an amiable nature is caricatured, not faithfully rendered, in Miss Esther Summerson.” In short, Brontë herself would have preferred to turn our project on its head, and only read the omniscient narrator’s chapters, eschewing the Esther chapters entirely. Dickens, for his part, claimed to never have read Jane Eyre: a fact that critics have called out as apocryphal — literary critic Lisa Jadwin labels Jane Eyre the “book that hit Dickens so hard he claimed never to have read it” (MLA 26.2.111).

It is ironic, therefore, that the literary intimacy between Bleak House and Jane Eyre — whether Brontë and Dickens would or would not have approved — may be one of the primary factors that allows Esther’s narrative to work so seamlessly on its own. By the time Bleak House was published, Jane Eyre was a sensation. The familiarity of Esther’s narrative to that of Jane therefore makes it an easy one into which to transition for a public — either 19th century or contemporary — well-versed in Jane’s story. Some might argue that we have been well-versed in Jane’s story far before the 19th century, and that a simple Cinderella effect shapes Brontë’s novel. But Esther and Jane’s similarities fall under far more specific umbrellas than just those of unwanted children with evil stepmother-like figures who are eventually rewarded for their goodness by the love of a (fairly) rich man. Would we be able to so fully immerse ourselves in Esther’s narrative if we didn’t have the example of Jane that came before her?

Esther and Jane are both narrators of their own stories: they hold the pen, and in that way, wield unusual power. Both have also been accused of being unreliable narrators. Much like Lucy, the narrator of Brontë’s later novel Villette (1853), Esther could even be described as a bad narrator, often not only leaving out essential information about the plot, but also refusing to describe her feelings at important moments. But where Jane’s (and Lucy’s) narrative power is permitted to exist on its own, Dickens pairs Esther’s narrative with that of an omniscient narrator.

What allows Jane’s narrative to stand on its own, while Esther’s narrative only serves as a portion of Dickens’ novel? The two narratives don’t seem to go together very seamlessly, and even stranger: we aren’t given enough information to understand, in the context of the storyline, why they’ve been paired together. Esther expresses a reluctance to write her portion of the narrative at all, which has led critics to posit that her narrative was commissioned, perhaps by the author of the omniscient narrator’s section. Shale Preston has postulated that it is John Jarndyce who has commissioned Esther’s narrative, in part as a cautionary tale directed towards future Jarndyce and Jarndyce progeny (Queer Victorian Families, 36). John Jordan, on the other hand, wonders if Esther is writing to her unknown mother or perhaps, like Jane Eyre, just to herself (Supposing Bleak House, 75).

But what if Charlotte Brontë and Elizabeth Gaskell’s weren’t the only pockets Dickens was picking? Reading Esther’s narrative separately from that of the omniscient narrator has allowed us to see the two narratives not as interweaving, but as supplemental to each other. The omniscient narrative serves to support Esther’s narrative, but Esther’s narrative is still whole and coherent without it, almost as if the omniscient narrative is a very long set of editor’s notes. This brings to mind Dickens’ friend and frequent collaborator Wilkie Collins, who is known for novels made up of fragmentary narratives: segments of diaries, letters, and forced confessions, that Collins splices together to make a full narrative. Sometimes, as in The Woman in White (1861) and The Moonstone (1868), the text directly states that a character in the novel is gathering the narratives to get the facts of a case or tell the story of an event; in these novels, Walter Hartright and Franklin Blake (respectively) are amateur versions of Inspector Bucket, acting as detective, narrator, and editor.

To us, Esther’s narrative seems less like a warning to the young Richards of the world or a lengthy note to an unknown mother, and more like a valuable segment of historical evidence. Unlike in some of Collins’ novels, at no point does Bleak House tell us why it has these two narratives. Rather, a closer parallel would be Collins’ Armadale (1864), which has an omniscient narrator with primary source documents (primarily the writings of Lydia Gwilt) spliced in, without comment as to why. As in Armadale, we imagine Bleak House as the fictional product of a nineteenth century historian writing the story of an event (the infamous Jarndyce and Jarndyce Chancery case). Just like Offred’s narrative in Margaret Atwood’s The Handmaid’s Tale (1985), Esther’s narrative here serves as a main primary text to help fill in gaps and provide firsthand testimony. It thus can be read in addition to the more objective, omniscient telling of the events, or can be read as its own, as an autobiographical document.

Our experiment was to look at Esther’s narrative on its own, and we have conclusively found that it not only works, but has fascinating connections to other novels of the period. Even more interesting, we are able to use Esther’s narrative to get at the heart of what exactly makes a text “Dickensian.” Without a doubt, Bleak House is Dickensian; this fact has become almost undeniable in our modern age, where the novel is considered the zenith of Dickens’ literary achievement. However, we have found that even separately, there is something undeniably Dickensian about Esther’s narrative. Of course, the question could be asked: which is more Dickensian, Esther’s portion or that of the omniscient narrator?

Esther would most likely, in our opinion, lose this battle, but it is significant to note that Esther’s narrative is still so clearly Dickensian, and could even be a Dickens novel on its own. Although Esther’s narrative may seem like a rehashing of Jane Eyre with some Mary Barton thrown in for good measure, Dickens has made the familiar Cinderella story entirely his own; it has his signature zany style, his comedic caricature-ish minor characters, his improbable subplots, and his social critique.

On the surface, there is nothing “Dickensian” about a first-person female narrative. Of all of Dickens’ novels there are only two that are told entirely through first person, David Copperfield (1850) and Great Expectations (1861), both of which have male narrators. Dickens’ novels usually have a noticeable masculine energy to them, and he is certainly not known to be a particularly good writer of female characters, so everything about Esther and her narrative, from its mere existence to its complexity and its completeness, seems to be an outlier.

Despite this, Esther’s narrative works on its own, could be a standalone novel, and is inherently and undeniably Dickensian, even supposing——

Emily Anne Foster is a PhD student in Columbia University’s Department of English and Comparative Literature. She studies Victorian literature, specifically the 19th-century British novel. She’s written for the Politics/Letters journal and for Public Books.

Christian Lewis is a PhD student in English at the CUNY Graduate Center with a focus on the intersections of disability, gender, and sexuality in the Victorian novel. He teaches at John Jay College of Criminal Justice and in addition to academia, Lewis is a theater critic with bylines in American Theatre, HuffPost, Broadway World, Exeunt, Medium, and Out.

Lewis and Foster have a forthcoming co-written piece in Dickens Studies Annual. 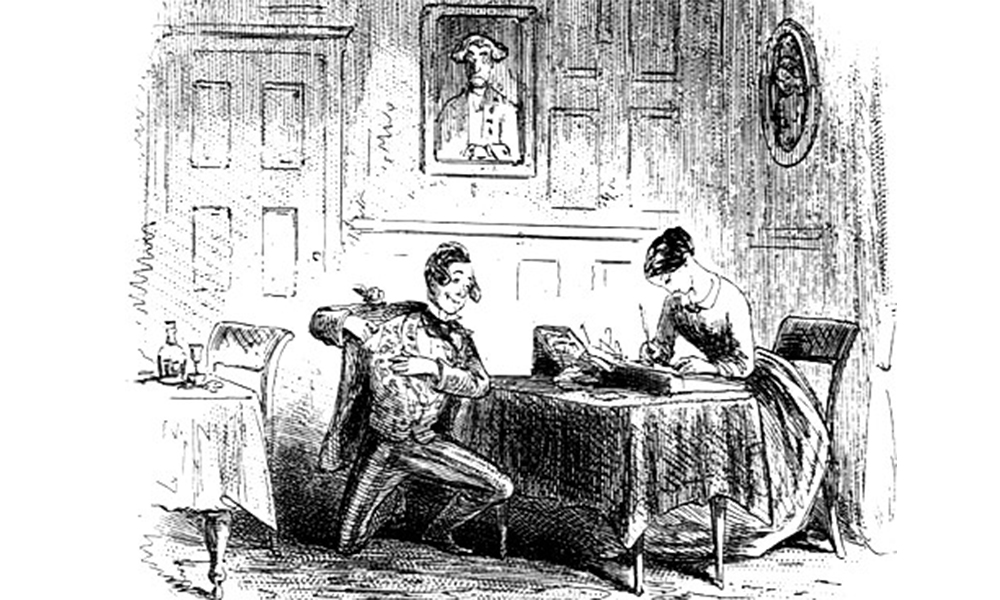