The Tuesday before Thanksgiving last year, The New York Times ran a special food section they called “The United States of Thanksgiving.” “We’ve scoured the nation for recipes that evoke each of the 50 states,” they said. “These are our picks.” I’m from Minnesota, and I was sure they would report that the state’s indispensable Thanksgiving dish was wild rice casserole. But instead, for Minnesota they picked “Grape Salad”: grapes in sour cream with brown sugar on top, heated under the broiler. I had never heard of it.

I emailed friends and relatives in Minnesota, and they had never heard of it either. So I wrote to the Public Editor of The New York Times, who’s in charge of investigating complaints of errors and unfairness and “matters of journalistic integrity.” I cc-ed food editor Sam Sifton, who replied promptly: “Actually, Mr. Wiener, that recipe is from David Tanis [who writes the City Kitchen column for the paper]. And he doesn’t call it traditional. He calls it old-fashioned. Happy Thanksgiving! Sam.”

I pointed out to Sam that, while David Tanis had been a famous chef at Chez Panisse, that’s in Berkeley, not Bemidji.

It quickly became clear that I wasn’t the only Minnesotan complaining. The Minneapolis Star Tribune ran a piece quoting a string of tweets: “My favorite part of the holiday is pruning my family grape tree for our traditional grape hot dish.” “Traditional Minnesota condiments. Salt, Pepper, and Grapes.” One featured a great non-quote: “‘I can’t wait to have Grandma’s Grape Salad at Thanksgiving!!’-said no one from Minnesota. Ever.”

Tanis himself responded on Facebook that he got the recipe from a friend who was a “Minnesota-born heiress.” Readers weren’t convinced; one said that made for two things Minnesota didn’t have — grape salad, and heiresses.

Soon there was a hashtag: #Grapegate. A thousand people posted comments on The New York Times Facebook page. Many of them wondered why wild rice casserole had been overlooked.

Finally The New York Times Public Editor, Margaret Sullivan, published her report on Grapegate. She quoted one reader who wrote, “Dear New York Times, What the hell is ‘grape salad’? Signed, All of Minnesota.” Sullivan concluded that the choice for Minnesota was “bizarrely wrong.” She called it an “epic recipe fail.”

The Public Editor also checked with Food Editor Sam Sifton. He admitted that the recipe was “out of fashion” in Minnesota, but said the dish was “delicious,” and concluded, “I hope a lot of people try it.” He seemed pretty good-natured about the whole fiasco.

The next day the Public Editor published a Grapegate update, quoting Julia Moskin, a reporter with the Times’s Food section. She sounded bitter. “We worked hard […] to generate a mix of 52 recipes that would not be cliched, repetitive, unhealthy, or unappetizing,” she said. “It is frustrating to have the project so thoroughly misunderstood.” It’s not hard to understand her unhappiness — didn’t any one care about the other 51 recipes that had no problems?

We all thought that was the end of Grapegate. But then the Pioneer Press discovered that the historic Lowell Inn in Stillwater had had an item on their menu since 1960 called Grapes Devonshire. It was part of a prix fixe fondue dinner that started with cheese fondue, then a fondue pot with beef, duck, and shrimp, and finally fresh red grapes in sweetened Devonshire cream with mint and brown sugar. (If you didn’t want the Grapes Devonshire, you could get chocolate fondue instead — it came with marshmallows and pound cake.)

The special dinner was on the menu every Friday and Saturday night. It cost $38 per person, and reservations were required. Barb Cook, who had worked at the Lowell Inn for 50 years, told the paper that Grapes Devonshire was “very, very plain. It tastes good,” she said, “but any kind of fruit mixed with sour cream and brown sugar tastes good.”

Also, Grapes Devonshire was a dessert, she pointed out, not a salad. But at least one restaurant in Minnesota served a sort of “grape salad,” so you could say The New York Times had not been totally wrong.

On Thanksgiving Day The New York Times Food section ran another big 50-state recipe piece. For this one, they reported on Google searches for Thanksgiving recipes that were the “most distinct” for each state. Minnesota’s top search result was “wild rice casserole.” An accurate news report about the state’s indispensable Thanksgiving dish: that was something to be grateful for at dinner that night. 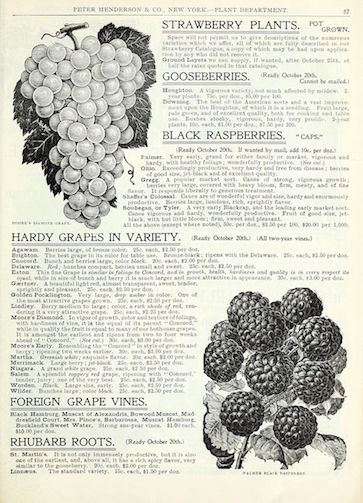