Derek Walcott, born in St. Lucia in the Windward Islands, died on March 17, 2017 at the age of 87. He was the greatest poet produced by the strong literary culture of the Anglophone Caribbean, and is often listed among the greatest poets of the English language of the second half of the 20th century. He was awarded the Nobel Prize for Literature in 1992 and was knighted in 2016.

I was 19 in the summer of 1974, between my sophomore and junior years, when I met Walcott in Port of Spain. Walcott ultimately wrote more than 30 plays, and I was fortunate that summer to see terrific Trinidad Theatre Workshop revivals of two of his classics, Ti-Jean and His Brothers (1958) and Dream on Monkey Mountain (1967).

Astor Johnson’s Trinidad Repertory Dance Theatre was presenting its season around the same time, with American dancer Dyane Harvey as guest artist. There were numerous social gatherings, and Walcott was always around, as he was dating one of the company’s dancers, Norline Metivier, whom he would eventually marry.

Our paths crossed again in 1978. I was in Port of Spain when the Trinidad Theatre Workshop premiered Walcott’s Pantomine, a two-character comedy based on Robinson Crusoe. In Walcott’s version, Crusoe was the owner of a failing resort hotel, and Friday was his employee/handyman. The play was a broad comedy, and the Port of Spain audience roared with laughter.

A few weeks later, in New York, Walcott and I both happened to be staying at the Chelsea Hotel. We had a few breakfasts and coffees and talked about a variety of topics, including Trinidadian writer C. L. R. James, whom I had interviewed at length the previous year. Walcott regarded James, who was three decades older, primarily as a political figure, which he certainly was, but he became interested when I spoke about James’s literary work, including his novel, Minty Alley; his classic mix of autobiography and cricket, Beyond a Boundary; and Mariners, Renegades and Castaways, a book about Herman Melville written while James was awaiting deportation on Ellis Island because of his politics.

Late one afternoon, Walcott called to invite me to a reading of Pantomime for Joseph Papp. I accepted, and we shared a cab from The Chelsea to the Public Theater. The reading was lightly staged, the actors holding scripts, and there were only a handful of us in the audience, including the Papps. I expected to see the comedy I’d seen in Port of Spain, but that evening Pantomime was very different – played as a titanic struggle between Crusoe and Friday. The text was unchanged, but it turned out to be equally well suited for interpretation as either comedy or tragedy. I don’t know that Pantomime was ever performed that way again.

That experience changed my conception of what was possible in theater, and I felt that I had glimpsed the scope of Walcott’s literary ambition. Tragedy and comedy were traditionally viewed as opposite ends of a continuum, but in Walcott’s Pantomime, they coincided. He had often seemed distant, even brooding, at gatherings in Trinidad — perhaps his attention was focused on literary, not social matters?

One Sunday, in March of 1984, Walcott’s review of the first U.S. edition of C. L. R. James’s Beyond a Boundary appeared on the front page of the New York Times Book Review. I was delighted to see that, over the years, Walcott had changed his view of James, and regarded him as more than a political figure. He called the book “a cricketer’s Iliad,” and gave it its proper due. Walcott had come to appreciate James as a literary man, just as he appreciated the sea and West Indian voices and Caribbean flora, transforming these materials into rich, complex, beautiful language. 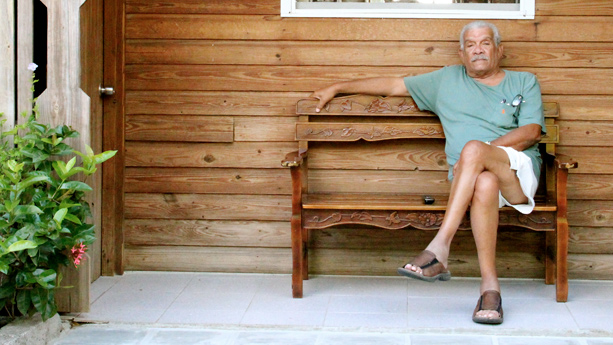