A hundred years ago, give or take a few days, the October Revolution (which actually took place in November — don’t ask) forever changed the political landscape of the world. The ensuing Civil War (1918-1921) shifted the boundaries of Russia, displacing two million refugees: blue-blood aristocrats, White Army generals, a future laureate of the Nobel Prize in Literature, and many a cabaret dancer and peddler of bagels. By 1921, the population of Russian exile became so massive that the League of Nations created the first international special commission for coordinating efforts to assist refugees. In the years that followed, the colonies of Russian émigrés kept growing in China, France, and Turkey — the latter serving as a transit point to the United States. The exodus even reached our fair city; Los Angeles was home to over 2,000 Russian expats in the 1920s.

Decades before MAD magazine debuted, a Russian émigré illustrator used that very name to publish his drawings on the pages of La Russie illustrée (a weekly Russian-French literary journal) and Le Monde. Mikhail A. Drizo (1887-1953), who had escaped the Bolsheviks via Odessa, settled in Paris in the 1920s and took up the pen to satirize both his own fellow émigrés and the native French. This cover from 1927, 10 years after the Revolution, features a masterful appropriation of xenophobic discourse: The illustration’s title, “Montmartre Without Foreigners,” subverts an anti-immigration slogan. The men in oriental outfits are Cossacks, standing at the entry of what appears to be a cabaret, a space in which they are to perform their own identity for money. They complain, “It’s so strange: the French say that Montmartre is full of foreigners. But we don’t see them!” All they see are fellow Russians, lining up to be entertained.

Some émigré Cossacks also wound up in Hollywood, where they earned money as extras for the studios:

We have decided to pay homage to another set of MAD’s drawings, titled “What If They Were Émigrés in Russia?” (1926) and “When They Become Émigrés” (1927), which featured Soviet and Western political elites in imaginary exile. This post continues  MAD’s speculative history, picking up in 2017, when anti-immigration rhetoric has reached another height. While the Western powers are reacting to the largest refugee crisis in history, Russia is trying to get the grip of its fleeing population (to add insult to injury, its death rate consistently exceeds the birthrate).

In the series of drawings below, Vladimir Zimakov depicts recent developments in immigration policy by laying out the possible fates of current U.S. and Russian political leaders and their trusty trumpeters: Vladimir Putin’s mustachioed mouthpiece Dmitry Peskov and Donald Trump’s rotating choir of apologists.

The Donald’s future vocation needs no explanation: snake oil sells everywhere. But Putin’s potential employment as a porter requires a historic footnote: In his early days in politics, he was known as the man who carried briefcases for Anatoly Sobchak, the mayor of Saint Petersburg (1991-1996) and a supporter of the country’s transition to democracy. Interestingly, Sobchak’s daughter Ksenia (Russia’s Paris Hilton turned revolutionary), has recently emerged as a candidate from the Russian opposition in the upcoming presidential elections. Putin’s Press Secretary, Dmitry Peskov, seen here teaching figure skating to kids, drew the ire of the Russian internet for wearing a watch worth $620,000. The public servant, whose entire life salary didn’t come close to that amount, claimed that it was a present from his Olympian bride Tatiana Navka, a renowned ice dancer, who, according to some media rumors, might also run for president. Like the famous facial feature at the center of Nikolai Gogol’s classic short story “The Nose” (1836), Peskov’s mustache lives a life of its own, and even has a Twitter account broadcasting political satire.

Unlike Putin, Donald Trump has cycled through an entire army of representatives to fight off the “Fake Media.” We envision them busking on Hollywood Blvd., hoping to be cast as extras in the city’s studios, as the noble Cossacks once were. 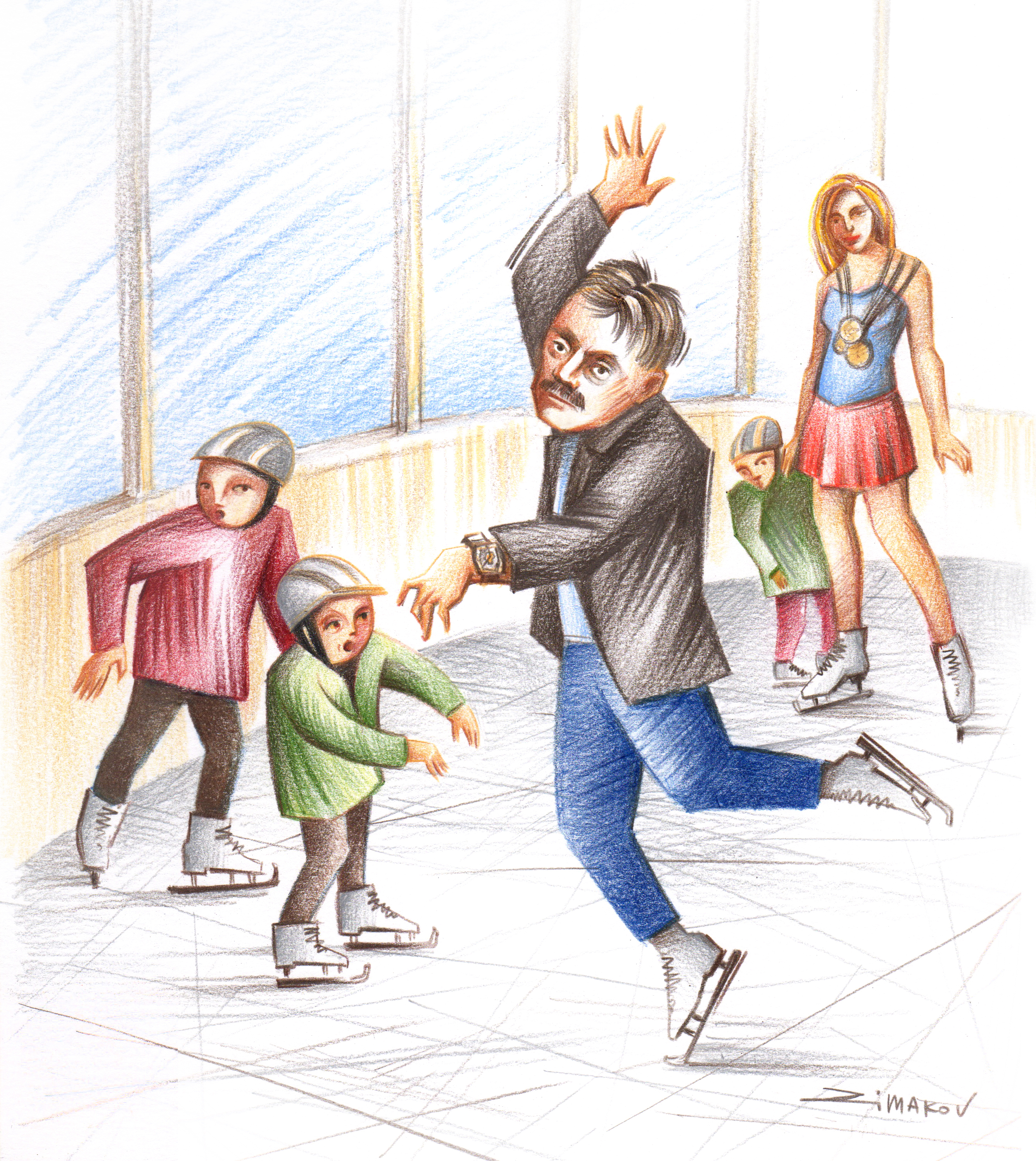