It’s a sunny day when I slip down to the cool dimness of the King Eddy Saloon. It’s been in operation since 1933 and has played host to a number of Los Angeles authors over the years. On my walk to the King Eddy, I spot a mural on its west alley wall, that pays homage to some of those greats. Charles Bukowski was immediately recognizable and is one of the most famous drinkers to grace a stool at the King Eddy. But I’m not here to visit Bukowski. Rather, his literary hero, John Fante.

I’ve been reading Ask the Dust, and when Arturo Bandini, the protagonist, goes for a drink at the King Eddy, I knew I had to go. Much of the action in Ask the Dust revolves around the Columbia Buffet, a restaurant that does no longer exists, if it ever did — I searched for it in the Los Angeles City Directory for 1939, the year that Ask the Dust was published, and sadly found no record of it.

In one early visit to the Columbia Buffet, Bandini is given a beer by Camilla, the woman with whom he has a tumultuous affair throughout the book. In an act of pride and spite, he pours the beer out: “I felt devilish, vicious. I got her attention and poured the beer into the spittoon.” I’m in no mind to waste beer though, so I get an ice cold one on this warm LA day and sit down with John Fante’s ghost.

Ask the Dust is a great time capsule of Downtown Los Angeles in the 1930s. Walking around the neighborhood where I work, I am frequently struck by the juxtaposition of buildings from the early 19th century and the new construction that feels incessant in downtown LA. Fante writes of old hotels that go down the side of Bunker Hill and a Grand Central Market that I know is vastly different than the one I frequent.

I love to imagine Fante’s downtown Los Angeles as I walk through the neighborhood, replacing new skyscrapers with modest hotels and houses. I envision the commercial buildings that have been repurposed for 21st century lofts as instead full of workers scurrying around the banks or the Red Car terminus. I love Los Angeles in all its eras, but there is something that draws me back to the 1930s and 1940s especially. Maybe I’m jealous of the way the Red Cars covered Los Angeles so thoroughly (not to say that the Metro doesn’t get me where I need to go most of the time). Maybe I long for a different pace of life and cost of living. Whatever it is, it has me reading and revisiting Ask the Dust.

To be clear, Fante doesn’t paint a rosy picture of Bandini’s life in the late 1930s. For most of the novel, Bandini is a struggling writer who runs through his money far too quickly for his stomach and his landlord’s liking. When Bandini goes to the King Eddy, he meets women who get paid for the drinks they entice him to buy for them. Fante writes, “So down to Main Street and to Fifth Street, to the long dark bars, to the King Edward Cellar, and there a girl with yellow hair and sickness in her smile.” It’s a small form of prostitution, and I do not doubt that for more money, any of the women he speaks to that night would have gone to bed with him.

When I visit the King Eddy, there are no women working the crowd. It’s early in their day and I’m the only customer in the bar, so it’s not hard to concentrate on my book and my visitation with Fante.

The thing about a famous dive bar is that their bartenders should (and often do) know the literary figures that drive tourists there. The bartender on duty this afternoon is no exception. He knows Ask the Dust and knows it drove me to the King Eddy. He even plays “El Paso” on the sound system as a tribute to Camilla, the Mexican girl Bandini loves.

We trade tips on literary themed bars in Los Angeles before I settle in to drink my sweating beer. After a day in the sun walking around downtown Los Angeles, it is so nice to take a swig of a cold drink. Cheap beer though it is — in tribute to Bandini’s poverty — it is still a perfect accompaniment to my day.

I love the way Fante writes, but I am not wild about Bandini himself. He strikes me as a little delusional because he views himself as “the great writer” and that over-confidence makes him unlikable.

However, I see in Bandini my own desires to be a writer and my own daydreams of getting published. Bandini succeeds in selling work without even trying — the H.L. Mencken stand-in, Hackmuth, turns a long letter from Bandini about his life into a short story that he publishes in his magazine. That success is both encouraging and not. I would love to be published almost as an accident, the result of a letter so interesting that it needs to be shared with the world, but even Fante’s own history of successes and rejections are more realistic.

Fante went through seasons of feast and famine, counting on projects that never quite materialized. That’s an existence I recognize. Although, unlike Fante, I have a day job that means my writing work is never entirely responsible for my financial well-being. Bandini’s own boom-bust cycle seems to be informed by Fante’s experiences, but based on the personal correspondence at the back of my edition of the book, I think Bandini had more delusions of grandeur than Fante did.

Reading the novel and the ancillary material provided at the end made me wonder about Fante and his fictional alter-ego. Bandini can be cruel and perverse in his desire to both have and hurt Camilla. Fante seems to have had a good relationship with his wife, Joyce, and in his letters, he keeps a pretty encouraging tone regarding his work and potential opportunities. While reading through the letters provided, I found this note to his cousin Jo, “I think the writing in Ask the Dust is superior to that in [other stories about] Bandini, but that the story in Bandini was much closer to me than that in Ask the Dust.” Knowing that Ask the Dust isn’t a clear reflection of Fante makes me like and trust him more.

Perhaps for someone with a less sunny disposition than me, that admission might have the opposite effect. I want the writers with whom I sit down, even across the years, to be authors I would legitimately enjoy meeting and talking with over a drink. Fante’s words to his cousin, and his style of writing create a sympathetic figure in my mind. Bandini may be a jerk, but his voice and story are conveyed beautifully, and it is the craftsmanship behind the characters that draws me to King Eddy’s.

Fante’s handling of his fictional women does leave me curious how he would react to me. His letters show a man who is supportive of his wife and her creative work, praising the poetry she sent to the Atlantic Monthly. However, both Camilla and Vera, the two main females who interact with Bandini, are written off as crazy and primarily motivated by their desires for men. Vera, who offers herself up to Bandini is looked down upon by him for not being Camilla and for being so available to him. Camilla is driven crazy by her love of pot and her love for the dying bartender with whom she worked, but who has rejected her.

Both women are treated poorly by Bandini, even as he wants them. He seems unable to view them as individuals full of their own desires. Maybe I’m overthinking it, but in our current social and political climate can I really afford not to think critically about how male authors portray women. I never stop thinking about it as I encounter the world, so I carry that reservation with me into the dimly lit bar.

As my beer can empties, I pull back from my feminist critique to remember all that I sincerely enjoy about Ask the Dust. Fante’s downtown feels as alive to me as my own. It is a surprise to walk out of the King Eddy and be faced with modern cars and contemporary shops featuring electronics and toys, sights that vary from his day. His writing is a monument to a life that has disappeared, or is disappearing, and I can appreciate it as such. 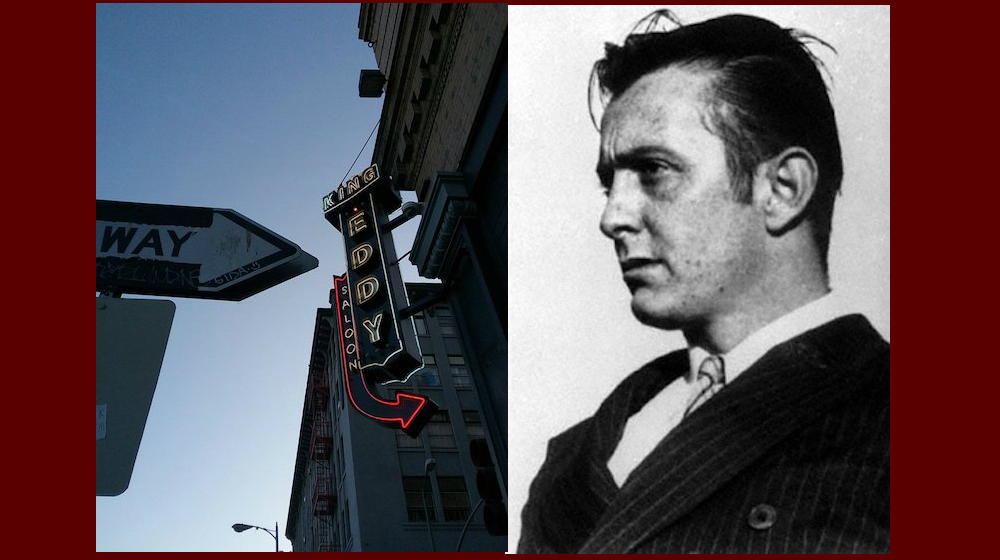