The boat is full. So goes the Swiss refrain used to turn away refugees when Nazi Germany threatened to undo an entire series of national borders. Metaphors for refugeedom have recently been dominated by a different image — that of a wall that will stay the influx of unwanted peoples.

If the boat is full, how might we find or even create more space? Today, on World Refugee Day 2019, this question seems especially urgent. It is also the very question that three (relatively) recent fictional works attempt to tackle. Each in their own way, Mikhail Shishkin’s Maidenhair (2005), Jenny Erpenbeck’s Go, Went, Gone (2015), and Mohsin Hamid’s Exit West (20017) ask us to reconceptualize the refugee narrative. In doing so, these authors explore how these stories might best be crafted, while the novels themselves embody the process by which the long-brewing refugee crisis, which really has no beginning, continues to shape literary themes and forms.

Shishkin’s book, partly based on his time working as an interpreter in Switzerland and the most technically complex of the three, incorporates interview (read: interrogation) sessions with Russian-speaking refugees applying for asylum. These Q&A sections — only one of various primary narrative threads — feature horrific accounts of the violence waged in 1990s Chechnya. The book begins by documenting these anecdotes in the most neutral form imaginable: through questions and answers standing in for living people. The layout of the pages imitates the kind of cold, calculated report generated in offices charged with dealing with asylum-seekers. The refugees’ words, too, ring as somehow clichéd, just more graphic descriptions skirting the line between appropriation and exploitation.

But, then, something changes. Gradually, with ever-increasing fervor, Shishkin’s semi-autobiographical narrator begins to alter the “facts” of their stories. They begin to blur and interpenetrate with his reading of Greek history and his recollections of other tales from disparate eras. The technique paints the refugees and their stories as only one chain in a long series. There appear Biblical figures, Ancient Greeks defeated in battle now aim for the sea, Jews escaping the 1905 pogroms in Russia.

Shishkin’s refugees take on mythic proportions, as he suggests the timeless nature of their manifold plights. The author investigates what it means both to narrate the stories of refugees and how to do so in the first place. However, he does not go about this in any straightforward manner, crafting a complex narrative that weaves together multiple storylines, including the memoirs of the famous Russian singer Izabella Iureva (1899–2000) and his own accounts of travels in Italy. The result is a dizzying novel that constantly disorients the reader, not unlike what a refugee must undergo when shuttled across borders, through different cultures and languages, and, indeed, among competing narratives — historical, political, social, and personal — about the experience.

Perhaps more provocatively, Shishkin argues that it does not even matter whether the answers a desperate refugee provides during an interrogation are, in fact, true to his or her life in a traditional sense. What truly matters is that someone somewhere has gone through such pain, and therefore, we must extend ourselves to help those who do make it. The controversial 1981 Swiss film The Boat Is Full — a source for Shishkin, of course — presents a similar dilemma. In it, a band of people thrown together during World War II find themselves in neutral Switzerland and must attempt to piece together a cohesive narrative about their relations to fit the criteria for asylum established by the Swiss government. The alleged truth of the situation matters a great deal less than the prospects that await them if they must return to Nazi-occupied territory, so they exploit storytelling to save themselves. Shishkin likewise generalizes the plight of the proverbial refugee by underscoring its universality and by probing the limits of truth in such morally convoluted scenarios.

Erpenbeck’s Go, Went, Gone takes a different tack. It details how a retired academic’s experience volunteering with African refugees in contemporary Berlin upends his worldview. The recently widowed former professor Richard discovers the men entirely by chance one day as he passes by a hunger strike, though he fails to recognize what is taking place on the city square. Initially, his response is anthropological in nature: he knows hardly anything about Africa and develops a lengthy questionnaire for use in his conversations with the highly diverse group of refugees. He struggles to keep everyone straight, even mentally nicknaming one of the refugees Apollo, as he meets numerous men from Nigeria, Burkina Faso, Chad, and other countries. While Richard comes to know them — and, in the process, himself much better — so too does the reader experience the clash between bureaucratic and individualizing narratives. The men are shuttled between centers and lodgings as they await judgement: can they remain in Germany, where they have begun to adapt, or must they return to their point of entry into Europe, Italy? The plot allows the reader to feel the tension of knowing the tragic details of another person’s life and escape from terrible conditions, and yet being unable to do anything about it. It all comes down to this tension between how a story is told and which elements are granted primacy. Richard may be transformed, but the political machinery is impervious to compassion.

Erpenbeck’s book goes about its deconstruction of Richard’s peaceful, privileged existence and of political expediency with clinical precision. She contrasts a man who recently drowned in Richard’s neighborhood lake with the plight of a refugee whose children drowned while crossing the sea by boat. Her writing is lucid, candid in its descriptions, and frank in how it chronicles the most distressing events in the refugees’ lives. (And for as much as my brief description unfortunately lumps them into a single category, Erpenbeck’s book does the exact opposite, granting distinctive traits to these characters, whom the author based on many people she actually interviewed). Formally, the text is rather simple with one remarkable exception close to its ending. The refugees receive letters ordering them to leave Germany. One responds by pouring gasoline over and attempting to light himself on fire. Even this dramatic act is recounted by the narrator in the driest of tones. Then, on the following two pages, Erpenbeck repeats the same question, once per page with plenty of white space surrounding it: “Where can a person go when he doesn’t know where to go?” It’s a shocking turn in many respects, as the plot, the emotional content, the thematics, and even the print layout of the words all come together. These pages express a graphic shift away from what has come before in the book. The purity and intensity of these narrator’s question and its very depiction on two opposing pages stress the immense sense of displacement felt by Richard’s friends. Erpenbeck isolates this existential problem faced by any refugee with subtle bravado, and she does so by forcing the reader to grapple with it head-on, emphatically stripping all excess words from the pages. To put Erpenbeck’s question differently, how can a refugee’s story be told when its limits remain unknown, and what can words offer in the face of profound fear?

In Hamid’s Exit West, the uncertainty embodied by the symbolic white space of Erpenbeck’s pages unexpectedly become more manageable. Its author wonders what happens when doors are literally opened for refugees. Magical thresholds that lead to England or to California, among other locales, appear across the globe, allowing for easy, if not always safe, passage. Connections are forged, and previously held prejudices dissolve, but conflict remains. Hamid alternates the story of Saeed and Nadia, two young lovers who flee their unnamed Middle Eastern city, with brief vignettes of several other door-crossers. The reader both spends a great deal of time investing in a moving account of these two individuals and encounters several more schematic ones that run the gamut in terms of focus. His prose, perhaps in keeping with the magical realism of the plot, feels somehow lighter despite the not infrequently exacting subject matter. It treats the brutality of civil war and a city bombing with the same straightforward narration as it does the miraculous portals that provide potential escape to thousands.

Hamid’s choice of plot device — the doors — also speaks to the astonishing features of a refugee’s daily existence: to be thrust into an alien land, to transition from one state of being to an entirely new one. Is reality too far off from these strange passageways that appear at random? The political levers of escape are difficult to identify, to be sure; chance and luck, Hamid seems to suggest, cannot be underestimated.

In tandem with the climate crisis that will only exacerbate the number of refugees worldwide in the coming decades and the attendant conflicts that will, at least partly, set them on their path, the question of how the global refugee migration will affect and shape narrative fiction is a fascinating, grim one. What tales will be told? How will the thematic and moral weight of the displacement of millions alter the form of literature itself? Already in these works we see three attempts to make sense of the chaos of geographic dislocation. On the surface, what they imply — that narrative shapes perception, that how a story is told can mold opinions or sway allegiances — isn’t altogether revolutionary. Yet, these authors’ innovations and their quietly profound prose do move the genre of displacement narratives. They are far too subtle to be didactic, but they represent alternative ways of framing a global dilemma that is only growing worse. Their greater value — beyond their ability to appeal to readers’ sympathies — lies in showcasing how new forms and approaches are necessary, and in a sense inevitable, in responding to the refugee crisis. As Richard’s arc in Go, Went, Gone exemplifies, it’s easy to look away now, but the plight of millions will not go ignored by anyone forever. Whether it is Shishkin’s mythical documentarianism, Erpenbeck’s deconstruction of the distanced anthropological view, or Hamid’s fantastical take on the vagaries of refugee status, all three works offer revitalized metaphors for understanding what is now taking place around us. In their plurality of approach and thought, too, they demonstrate the need for multiple points of view. Together, they counter the domineering narrative of the wall. There will be no singular solution; rather, the combination of the boat, the drowned man, and the door, along with unexpected formal moves, unveils new vistas.

In an essay on his language, Shishkin adapts his favorite metaphor to an entirely different purpose: “The novel is a boat. Words must be revived in order for the boat to be genuine, so that I may climb aboard and sail out of this solitary life to a place where they love us and are waiting for us all. Save myself. And take all of my characters with me. And the reader too.” Here, too, we see the humanistic element of his poetics. For him, as it seemingly is for Erpenbeck and Hamid, reader, writer, and refugee alike can find common ground through words, not, of course, through physical barriers. “Words must be revived,” he writes, suggesting that the way we talk about the familiar, including the theoretical or the concrete refugee, must be defamiliarized in order to spark clearer understanding and, hopefully, compassion.

“The boat is full” is no less a story that they tell themselves than any other. Can art engender more room? 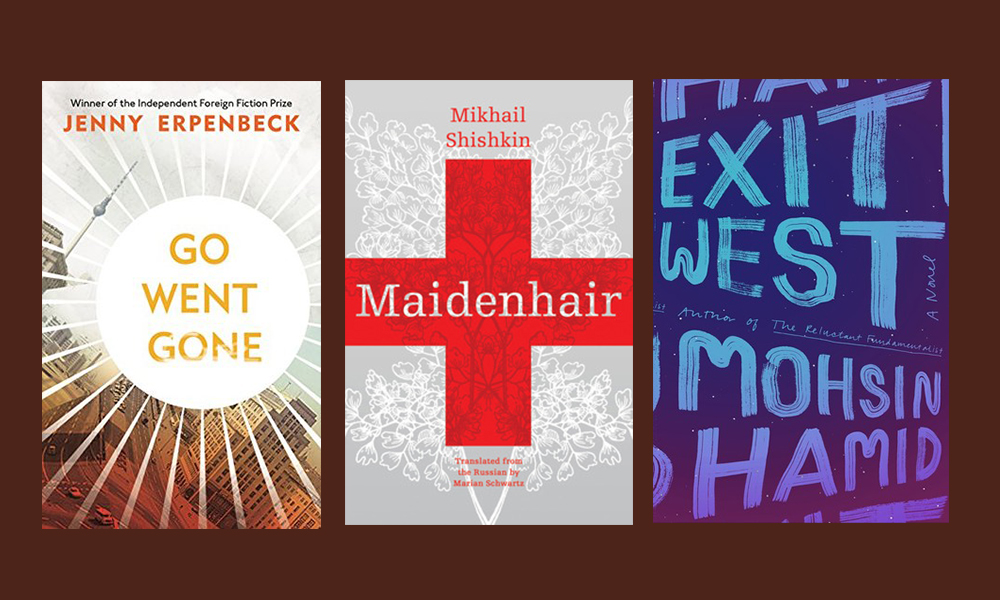