Nikolai Gogol’s 1832 story “Christmas Eve” came to mind when watching the September joint press conference between Ukrainian President Volodymyr Zelensky and Donald Trump. In Gogol’s story, a group of Ukrainian Zaporozhian Cossacks, who have gained a long-desired audience with Catherine the Great and intend to ask her to restore former Cossack rights, allow a Ukrainian blacksmith to join their envoy. The blacksmith, however, has arrived in the capital on the back of a devil, who urges him to fulfill a different goal: to procure Catherine’s shoes, which the blacksmith plans to bring back to Ukraine to present to his beloved. No sooner does the Empress ask the group to tell her what they want than the blacksmith (who is now carrying the shrunken devil in his pocket) compliments her on her shoes, putting the Cossacks’ pressing political needs at risk so as to satisfy his vain personal desires.

Like the devilishly deluded blacksmith in Gogol’s story, Trump is motivated entirely by personal gain. By exploiting Ukraine’s dependence on US aid in its ongoing war against Russian-backed separatists in the East, he has destabilized a still nascent post-Soviet democracy struggling to attain political autonomy from its neighboring goliath, and has taken advantage of a new president poised to handle one of the most difficult negotiations in Ukrainian history: ending a war that his opponent does not admit to fighting. In the Gogolian world of Trump’s foreign policy, the US President takes little interest in the delicate balance of international relations, instead focusing on himself, and his own immediate interests.

Elected by an unprecedented 73% of voters, Volodymyr Zelensky is a young, inexperienced politician, his primary credentials being his enormously successful role in the sitcom Servant of the People, in which he played the President of Ukraine. He is a populist but some view him optimistically as a populist of a benign sort — more Macron than Trump, and with a strong desire to end the war and further strengthen Ukrainian democracy. Although Zelensky enjoys popular support in Ukraine, he has been an enigma to many vocal activists skeptical of his ability to forcefully resist either the Russian-backed separatists or Russia’s intervention in domestic policy. Zelensky’s critics have likewise been skeptical of his ties to the oligarch Ihor Kolomoyskyi, the owner of the television station that aired his popular comedy show. The White House whistleblower’s report concerning the July 25 phone call between the two presidents, released in late September, revealed Trump’s assumption that, although Zelensky has publicly committed to combatting corruption, he has actively promoted it behind closed doors. The phrase “do us a favor” means something very particular when we take into account Trump’s belief that Ukrainian politicians are “all corrupt.”

Like Gogol’s Cossacks who have waited to meet the Empress, Zelensky had pressing reasons to seek a meeting with Trump when he visited New York in September. He had come to ask the United States for badly needed military aid and relief funds to assist Ukraine in its ongoing war against separatists in the Donbas region. This included, most importantly, the $391 million in promised funds that Trump froze shortly before his July 25 phone call. And yet, the topics discussed during the long-awaited meeting kept shifting from Zelensky’s urgent diplomatic mission to Trump’s superficial, and disturbingly personal, interests. Trump used much of the time to smear Democratic candidate Joe Biden. In a bizarrely Gogolian, devilish diversion from national interests to sex appeal, the US President noted that, although he had never been to Ukraine, when he owned the Miss Universe pageant, there had been a Ukrainian Miss Universe. Instead of offering concrete support for the war effort, Trump gave vague, condescending advice, focusing on Zelensky’s personal career: ending corruption in Ukraine, he told Zelensky, “will make you great personally and it will be good for your country.” When Trump did discuss Ukraine’s political situation, he did so with coded references to the hoped-for investigation into Hunter Biden’s business interests in Ukraine, and to his own trust in Russian President Vladimir Putin.

Trump’s past apparent allegiance to the Kremlin further confuses the favor he requested of the new Ukrainian President. Trump was not only asking Zelensky to compromise his integrity by investigating Trump’s political opponent; he was asking him to help absolve Russia — Ukraine’s violent antagonist for the past five years — of any remaining suspected culpability in intentionally influencing American voters in Trump’s favor during the 2016 presidential election.

Ukraine has been a strategic ally for the United States, and Ukraine’s struggle to contain Russia’s ambitions to gain de facto control of Ukraine’s eastern regions is a struggle for more than territory. Kremlin policy has, throughout the now two decades of Putin’s leadership, introduced legislation that has limited human rights. A 2013 law forbidding “Gay Propaganda” in Russia institutionalized homophobia, legitimizing harassment of LGBT Russians, putting individuals at risk of imprisonment, and putting families at risk of separation. Around the time of the 2014 Euromaidan revolution in Ukraine, many Russian nationalists, who had begun referring to Europe as “Gay-ropa” (a play on “Evropa” — the Russian for Europe), linked the Maidan activists to sexual deviance. A 2014 law aimed at preventing what took place in Kyiv made public demonstrations illegal, annulling freedom of assembly in Putin’s Russia.

Amid the scandals involving Trump, Ukraine has been under pressure to hold elections on the special status of the Russian-backed republics of Donetsk and Luhansk in Eastern Ukraine, in keeping with what has become known as the Steinmeier Formula. Although negotiation with Russia will be crucial to ending the war, if held before a complete withdrawal by Russia, these elections could — like the Crimean referendum — grant legitimacy to Russia’s de facto control of these regions. What this could mean is that a large part of Ukraine could effectively become an autonomous, pro-Russian republic. At the urging of European leaders — mostly in France and Germany — Russia and Ukraine have been moving toward peace talks since last spring. However, by reiterating that Zelensky should “talk to Putin” rather than affirming its support of Ukraine’s right to self-determinacy by granting the country the aid it needed at a crucial moment, Trump was undermining the country’s position at the negotiating table.

For Zelensky, everything was at stake in his meeting with Trump, and throughout the 15-minute interview he tried to draw upon his skills as a comedian to steer the conversation back to his country’s need for aid. He broke the ice by observing, “It’s better to be on TV than by phone I think.” Later in the conversation he needled Trump lightly by telling him he looks forward to their meeting in Washington, but he still hasn’t learned the date. And yet, when a journalist asked Zelensky whether he would honor his commitment to investigating the Bidens, the Ukrainian President’s response was a desperate appeal to recognize Ukraine as an autonomous political unit: “Ukraine is a free, democratic country.” The plea to recognize Ukraine’s independence and self-respect recalled the Zaporozhian Cossacks’ desperate plea to Catherine: “How have the Zaporozhians wronged you? By leading your army through Perekop and helping your generals to cut off the Crimeans?”  Zelensky then took cover under the Ukrainian language, affording himself an uninterrupted minute to quickly enumerate Ukraine’s greatest concerns. Zelensky cited Ilovaisk — the 2014 battle in Eastern Ukraine during which, as was later unearthed, Russian troops joined separatists to fight Ukrainian soldiers; Euromaidan; and corruption. Trump appeared to listen closely to the interpreter’s translation, but then turned the conversation back to Nancy Pelosi and “the radical left” in the US before abruptly ending the meeting. Gogol’s devil was at it again.

The war Russia has waged in Eastern Ukraine has made it impossible for Ukraine to become economically and politically stable in the wake of former President Viktor Yanukovych’s 2014 ousting. And yet the last five years — years of war that have cost approximately 13,000 lives — have, paradoxically, also been viewed by many Ukrainians as their first years of freedom. Lyudmila Khersonskaya, a Russian-language poet living in Odessa, made this point to me last month over tea at the dacha she shares with her husband, the poet Boris Khersonsky, and then went on to remark on the paradox of the current war: “We are at war, but we still have trains between Odessa and Moscow.” This paradox — the fact that Russia is simultaneously waging war on Ukraine’s east and pretending not to be at war — is in the Kremlin’s interest, for it normalizes a state of affairs in which Russia can maintain the appearance of normalcy while actively destabilizing its neighbor.

Gogol’s weird world of devilish interests – a tedious world where corruption constantly undermines virtue – may be the best measure for Trump’s engagement in East European politics. At the end of Gogol’s “Christmas Eve,” the blacksmith returns to Ukraine with shoes for his beloved, who laughs at him and tells him she didn’t really want them anyway. The literary scholar Edyta Bojanowska puts it well: “the net gain for the Cossacks is a worthless pair of shoes.” Devils often appear in Gogol’s stories to distract well-meaning peasants and Cossacks from their true interests.  In the current Gogolian world, the US President should be as powerful and important to Ukraine as Catherine the Great. And yet Trump has acted, at best, like the foolish blacksmith. In the process, he has yielded the role of tsar to President Putin. 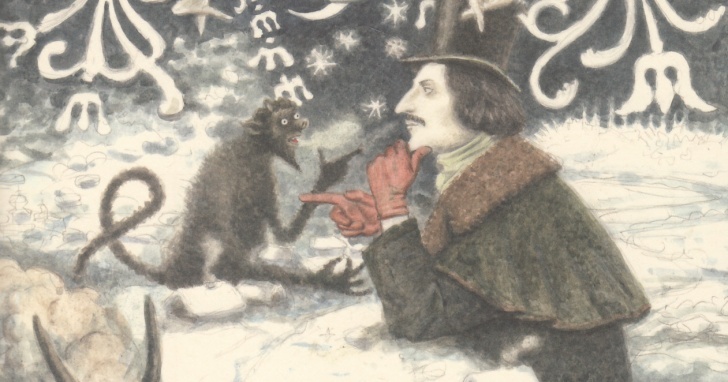