Even as COVID-19 grinds economies to a trickle and upsets the constant go-go-go productivity of everyday life, Trump still dominates media coverage. Unsurprisingly, the same headlines are being rehashed: “Trump is an immoral narcissist,” “Trump is a populist whose promises are unfulfilled and accounts untrue,” and “Trump does not understand the presidency.” The shifts in content are almost predictable. Rallies for white power are now anti-lockdown — both based, accurately or not, on Trump’s own provocations. The fact checkers who focused on Trumps unfulfilled promises about the economy, the Wall, or his cabinet now dive into his pledges for handling COVID-19. Once again contradictory statements, misinformation, and unrealized plans abound. Most recently his clashes with medical experts and governors — in particular his claim of “absolute power” — have stoked skepticism over his understanding of the American political system. It is only more fodder for those who previously questioned the constitutional basis for setting up detention camps, mass ICE deportations, and “Muslim” travel bans.

While the whole story may very well have already jumped the shark for some, the number of “likes” the president receives has been relatively consistent. It seems that every day we’re given new evidence for the claims that the president is disrespectful towards women and minorities, exhibits the tell-tale signs of narcissism, and otherwise exploits the politics of populism — and yet all of this has done little to change his followers’ minds. What many thought was merely a façade meant to win the nomination of the increasingly radical Republican Party continued well through his campaign — and then the election, and then his swearing into office, and then, of course, his actual presidency. At each and every step, critics hoped he might change. They were wrong. It never happened. The Donald Trump that branded everything from properties to steaks to the pretend firings on his game show The Apprentice is the same Donald Trump we now have as the 45th President of the United States. At no point did he start acting more presidential. The seemingly cemented legacy of the ever-cool and collected Obama has been overshadowed by the identity of his successor: an impulsive businessman who brought his personal brand to 1600 Pennsylvania Ave.

More importantly, Trump brought with him an entire arsenal of profiles that reshaped the American political scene. The discourse he dominates is a “politics of profiles.” This means everything is treated according to profiles, and operates on familiar yet often misappreciated mechanisms.

Profile-based concepts and logic already dominate everything from the economy to academia, advertising to everyday social interactions — but it bares itself most fully on social media. Trump can be understood accordingly: he is first and foremost a content-creator and influencer. People like, follow, and vote for his profile, and for the profile of his policies.

The growing dominance of online profiles has its roots in the sort of “branding” that Trump has been perpetually engaged in — a branding that came to prominence after advertisers convinced companies that selling an image was as or more important than their actual products or services. Nowadays brands aren’t just for companies; almost every aspect of society, from countries and universities to individuals, are expected to brand themselves. The idea of a personal brand hearkens back not just to ownership (as is the case with branding livestock, for instance), but to one’s social identity. Indeed, brands themselves are rooted in reputation. Modern day brands differ from reputations in that they are largely self-constructed and presented primarily to people personally unknown to the brand’s creator. Profiles develop with even more complexity. The continual updates required by profiles rely on a deep understanding of the audience, that audience’s own perspective on others, and dynamic responses to feedback.

Trump is, first and foremost, a curator of his own profile. Everything, including his presidential policies, is done to serve the curation of his profile. Like a judge on America’s Got Talent, or an Instagram influencer, Trump sees himself and his policies through “second-order observation.” In other words, he views not the thing itself, nor how it is viewed by the audience, but rather how he thinks the audience might think other people would think. This is also the way everything from a house to a car or smartphone is valued. Not in terms of its actual materials, or how much someone would pay for it, but how much someone thinks others think (still) others would pay. The audience or “others” are not simply “public opinion,” they are the “general peer.” The general peer are those who share one’s own basic views and are interested in the same topics. For Trump the general peer is primarily radical Republicans, but he reaches out to as many groups as possible. His profile — again, including the actual policies he encourages — is highly responsive to his general peer through constantly monitoring their reactions. Rallies serve many functions, one being “crowd sourcing” or engaging in real life social validation feedback loops. It is here that Trump can actually hear what slogans and attitudes go over well. It is also where those who seek to align their own profile with Trump’s can display their Trump-affinity profile to others.

Trump expertly harnesses the logic of profiles to dominate political discourse. Through nicknames, he “profiles” all the major players: himself, the political system (“swamp”), the media (“fake news”), political parties, individual opponents and allies, companies, countries, and even viruses. (There’s even a Wikipedia page on it.) Whether or not his profiling accurately reflects his self-proclaimed stable genius, Joe Biden’s alertness, or the “Chinese virus” is of little importance. His populist strategies and narcissistic compulsions are all in service of a greater profile-based strategy. Pledges to “Make America Great Again,” “Build the Wall,” and “Drain the Swamp” are, first and foremost, indicators of a certain profile. They are certainly not indicative of any policy prescriptions. As long as the general peer is served, as long as things look good through a second-order lens, as long as he is accumulating validation in the form of “likes,” the Trump profile is successful. And this is what he offers to his supporters.

Associating with Trump’s profile is, like posting about global warming or wearing Nike shoes, a way for people to cultivate their own profiles. Trump’s promises do not need to be factual supported to be perceived as real — in much the same way that Nike running shoes do not have to make you “Just Do It.” Of course, funding needs to go to the Wall, and some construction on it is a bonus (Nike running shoes are, by the way, great for running), but having a cabinet that could well go down as the swampiest in history or employing risky short-term economic measures do not invalidate the slogans defining Trump’s profile. Slogans are by nature resistant to invalidation because they are entirely self-referential — outside of themselves and the brand they are advertising, they do not mean anything. The presentation itself, along with the commitment to continue to update the profile, are what matter most. Nike does its best to reassure consumers that its shoes are not only cool now, but will be tomorrow as well.

Many Trump followers may be unable to identify the exact point when America was great, much less what made it great in the first place, but that was never actually the point. His followers’ goal is to boost their own profiles by associating Trump’s. They want to be seen as identifying with the project of Making American Great Again. The Wall functions along similar lines, and now we encounter the same mechanism in Trump’s far more dangerous (anti-)response to COVID-19: a response that includes his clashes with state governments and many other major American institutions. Reporting that the facts do not support his claims or that his promises are unfulfilled only feeds into the profile of main-stream media that Trump setup: It’s all fake and corrupt.

But is that really true? It doesn’t matter. Trump made the profile and the general peer agrees.

Recognizing the importance of profiles for Trump doesn’t mean that news outlets should stop reporting news or fact-checkers should stop doing their job. Some people do take what he says seriously and support him for his supposed honesty or authenticity — which is why “drinking bleach” was such a hot Google search after April 24, 2020. However, repeatedly arguing that Trump is a narcissist, a populist, or both doesn’t seem to be getting very far. The profile he has curated says nothing about not being a narcissist or populist — in fact, he often celebrates related traits. Even if Trump is these things, he is also something more: he is a profile. The politics he expertly employs is the politics of profiles, or “profilicity.” 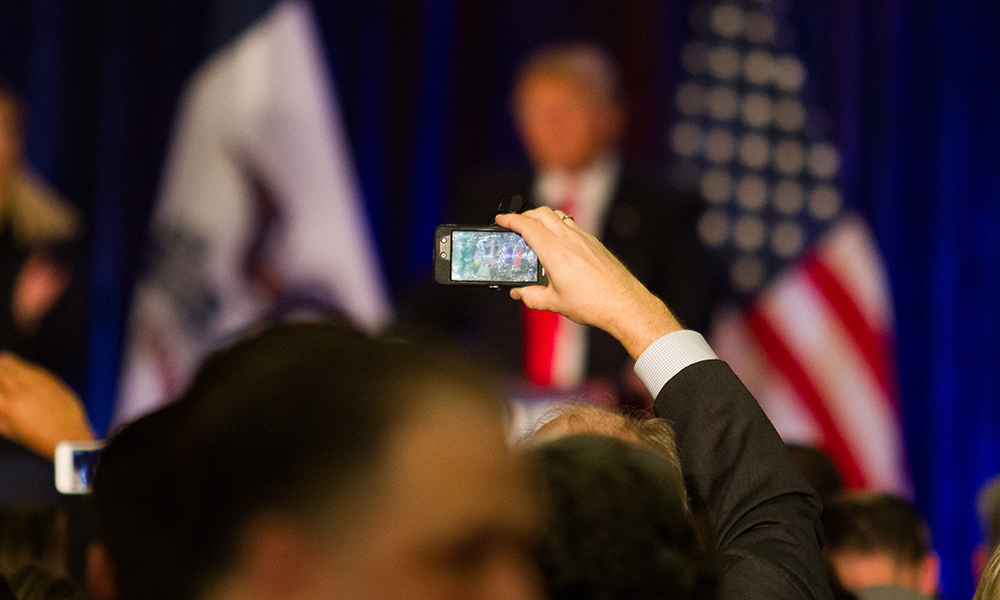