When taken in the context of everything else the President has said about his eldest daughter, it is easy to understand the hullabaloo over the latest detail that Donald Trump revealed about his relationship with Ivanka: that he likes it when she calls him “daddy.”

But I did not share the internet’s abhorrence — at least not at first. That’s because I call my father “daddy,” and I know he likes that I do. When we’re together, we fall into the comforting patterns that have existed between us since as long as I can remember — “daddy” signifies that. I even watched my mom call her father daddy in the last days of his life, and thinking of her whisper the word to him the last time he was conscious makes me warm and sad all at once. Why does what one calls one’s father have to change just because time passes?

But the creep-factor surrounding the word “daddy” is hard to explain away with personal experience. Even writing out the phrase “I call my father ‘daddy,’ and I know he likes that I do,” felt a little icky to me. The word itself invites the comparison to the more overtly inappropriate way Trump has talked about his daughter, reflected in the press’s reaction to the otherwise innocuous comment.

Why is the word “daddy” so gross when used between two adults, and between Ivanka and Trump in particular? Why does the fact that Trump says it gives him pleasure make one’s skin crawl? “Daddy” is certainly part of the lexicon of kink. But perhaps the word carries more with it than just sexual innuendo. We can look to the Electra complex or Freud’s totems and taboos; to the positioning of women as the property of their fathers until the rights to their bodies were transferred to their husbands; to the authority and submissiveness and power the word invokes. But one famous poem excoriates the Daddy-Daughter relationship in a way that encompasses all of these dynamics. And that is Sylvia Plath’s “Daddy.”

In the apostrophe poem “Daddy,” the late poet addresses her dead father and metaphorically details the bad and worse of their relationship using comparisons to the Holocaust. Ultimately, Plath verbally kills her father by describing the “stake in your fat black heart” and declaring “daddy, daddy, you bastard, I’m through.” Plath effectively turns “daddy” from a term of endearment into a venomous chide. In killing her father as she directly addresses him in the terminology of feigned innocence, Plath flips the usual father-daughter power dynamic on its head. And as she persists in calling him “daddy” with his body bleeding before her, she asserts her dominance.

It is not a stretch to map Plath’s intensely personal poem onto father-daughter relationships in general, but it has surprising parallels when more specifically applied to Donald and Ivanka. And it is a curiously instructive lens through which to consider their relationship, Ivanka’s actions, and the question of what it might be like to have Donald Trump as a father.

Plath opens “Daddy” in strong apostrophic form by telling her father that she can no longer exist within the confines of their relationship. “You do not do, you do not do / Any more, black shoe / In which I have lived like a foot / For thirty years / poor and white, / Barely daring to breathe or Achoo.”

Like Plath and her father, Ivanka lives entirely within the world that her father has created. She came up in the family business and now serves as one of his closest political advisers. If Trump is the inflexible black shoe, Ivanka has been molded sparkling and white, to fit the space. She never speaks out against Trump — never utters an “Achoo” — and even defends his actions when they run counter to her supposed beliefs, such as her recent capitulation on equal pay policy. But of course, for Ivanka, the shoe fits.

Ivanka’s marriage to Jared Kushner also has strange threads in “Daddy.” Marriage is seen as the penultimate separation from one’s father, surpassed only by his death; once your father walks you down the aisle, you belong to someone else. Ivanka married the Orthodox Jew Jared Kushner, a slight, quiet, and even, at times, sleek man in comparison with her brash “Aryan eye, bright blue” father. Plath metaphorically draws the difference and strife between her and her father as that between a “Panzer man” and a Jew. “I began to talk like a Jew / I think I may well be a Jew,” the poem reads. By calling herself a “Jew,” Plath depicts herself as an undesirable in her father’s eyes, as irreconcilably different from him, and under his control. Ivanka, of course, literally became a Jew when she converted to Judaism before marrying Kushner. But did she ever truly separate from her father? Plath finds her voice when she begins to “talk like a Jew.” But Ivanka again failed to speak out against her father even when he neglected to wholeheartedly condemn the Nazis who marched in Charlottesville. Ivanka’s tongue must have “stuck in a barb wire snare” before she was able to use her identity to have a meaningful impact on her father. This parallel is not so much about religion as it is about sticking to and standing up for the ways one differs from one’s father in the face of conflict — which Ivanka has failed to do again and again.

Late in the poem, Plath transfers her aggression and anger at her father to her former husband, the poet Ted Hughes. She describes Hughes as “the vampire who said he was you,” and implicates that in ending her relationship with one, she destroys the connection with the other. To Plath, there is a clear line between her blood-sucking husband and her constraining father, and she ultimately frees herself from both.

As with the way Plath saw her father and Hughes, there are similarities between Jared Kushner’s real estate empire and the Trump enterprise. The Kushners sought to take their real estate brand to the next level with a huge investment in Manhattan that has now financially backfired. Donald Trump’s legacy to Trump real estate has been to build the brand, and also make fatal financial mistakes. Despite these missteps, Ivanka remains beholden to both father and husband. So while in “Daddy,” Plath breaks the cycle of control perpetuated by first her father and then her husband by killing them both, in the Trump family, the vampire is alive and well.

And finally, Plath’s most famous line from “Daddy” maps eerily well onto our commander-in-chief and his (our) first daughter. “Every woman adores a Fascist, / The boot in the face, the brute / Brute heart of a brute like you.”

Think pieces about Trump’s fascist characteristics abound. But reportedly, the tactics of rigid authoritativeness extend to the way the President raised his children. An article in Vanity Fair about how the eldest Trump children grew up details that Trump’s relationship with his children was largely based around his business. The kids had the most contact with their dad when they visited his office, and were otherwise raised by nannies. In addition, the traits that he displays that reflect his narcissism also impacted this relationship. Writes Emily Jane Fox in Vanity Fair:

A classic narcissist, according to Dr. Seth Meyers, a clinical psychologist who specializes in relationships and parenting, sees people as objects and their children as mirrors. Such characters, preoccupied with their image, are indeed most pleased when their children more closely reflect the image that they themselves want to project to the world. The Trump kids, Meyers posited to me, were very much raised to reflect their father’s image of himself. “They learned very early on to be loved and to fit in with the image their father prized so much,” he said. “What narcissistic parents usually do is they want compliance, and boy, we have no better example of children who seem to be complying with their father and his agenda than these children.” (Growing up, “what he cared about was respect,” Ivanka recalled in a recent Politico Magazine profile. “You would never hear us yelling at our parents or using a tone that was inappropriate or disrespectful. Even a tone.”)

Trump has not been officially diagnosed with Narcissistic Personality Disorder. But certain traits such as an inability to accept blame and an inflated sense of one’s abilities are hard to deny. Growing up in the wake of such a person, these children had to comply or be shunned. Enter Ivanka, stumping for her father in North Dakota as he downplays the seriousness of drought, and fails to connect extreme weather events across the country with climate change — even though she was previously a global warming activism advocate — and smiling as he says he likes it when she calls him “daddy.” Every woman adores a fascist.

The internet collectively shuddered when Trump revealed his “daddy” tidbit because of the sexual overtones. But Plath’s picture of the phrase — from the confining shoe, to the withheld love, to the transfer of power from father to husband, to fascistic control, and finally, to the declaration that she is “through” — paints an even fuller picture of what the phrase can mean when applied to Donald and Ivanka. It illuminates the unbreaking control, and Ivanka’s failure to become a wife and a businesswoman beyond the shadow and authority of her father. The word, and Trump’s enjoyment of its use, emphasizes the “brute, brute heart of a brute like you” and our president’s — Ivanka’s father’s — “love of the rack and the screw.”

Plath was beholden to her father’s ghost and the authority of her daddy stand-in Ted Hughes until she liberated herself with “Daddy” and the other Ariel poems. She exorcised the men in her life and the power they had over her by asserting her difference from them, telling them the truth about themselves, and finally, by telling her “daddy” how people really see him. Plath ends her address by revealing to her daddy that “the villagers never liked you. / They are dancing and stamping on you. / They always knew it was you. / Daddy, daddy, you bastard, I’m through.”

So maybe, for Ivanka, “daddy” is exactly the right word for her father — in the Plath, authoritarian, controller who must be told the truth, sense of the word. If only, like Plath, Ivanka was capable of letting her daddy know how us villagers really feel. And, finally, that daddy, daddy, you bastard, we’re through. 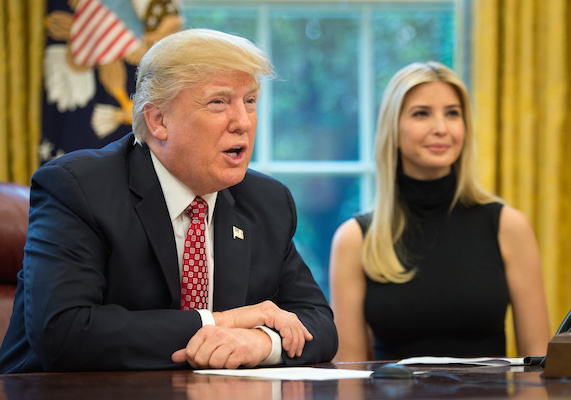