Coming of age stories are a common trope in popular culture — in many movies and TV shows, we see adolescents experience grief, heartbreak, loss and other challenges that suddenly catapult them into adulthood. It’s a universal human experience, but the way it’s depicted isn’t always representative of all the people it affects. That’s where emerging playwright and Native American writer (part Mississippi Choctaw, Laguna and Isleta Pueblo) Dillon Chitto comes in.

Playing through March 25, Chitto’s play takes place in a pueblo community, focusing on the life of teenager Edward Anaya. He grapples with the challenges that many of us once dealt with: do we stay close to our communities or move away into unknown territory when choosing the right college for us? Edward has led a complacent life as the senior center bingo caller in his pueblo, until a college acceptance letter turns his world on a dime.

Chitto, who had a strong desire to bring the pueblo life to the stage, was drawn to connecting themes of culture, intergenerational traditions and customs and his community in his playwriting.

“Growing up, my extended family would always get together so I saw the way everyone was present, the humor and the drama,” Chitto explains. “The family and community dynamics were a natural and even necessary part after I decided to place [Bingo Hall] on a pueblo because those communities are very close [knit].”

As a young adult, he also would have “been amazed to see New Mexican stories being played out, especially pueblo stories.” Now, he’s brought those stories to life himself.

Like his main character, Chitto also recalls having to leave home after high school. When he graduated, he says, he moved to Ohio from New Mexico. It was a culture shock, and he struggled leaving his family and community behind. “This is a dilemma for many, so I think many audience members can relate to Edward even if they aren’t [from a pueblo community].”

“We all have obligations and ties to our communities, we all want to do what is right, we all have had our hearts broken,” he adds.

Founder and Producing Executive Director of Native Voices at the Autry, Jean Bruce Scott, says Bingo Hall is a funny and heartwarming play all at once. With the character of Edward Anaya, “Chitto has given audiences a fresh-faced Ferris Bueller in a pueblo, struggling with teenage angst, familial embarrassment, and the fretful pangs of first love.”

During a time when we need more work, stories, and voices from communities of color amplified and elevated, Scott hopes the play is a welcome respite from the news cycle and the old stories we’ve all heard before. “It takes audiences on a journey to a world that is both familiar and completely unique,” he adds.

A charming play about a particular extended family on a New Mexico reservation that uses humor to look at life’s trials and tribulations, Bingo Hall will make you walk away thinking about the ways you, too, can see yourselves in the characters and experiences of the pueblo communities depicted on stage. 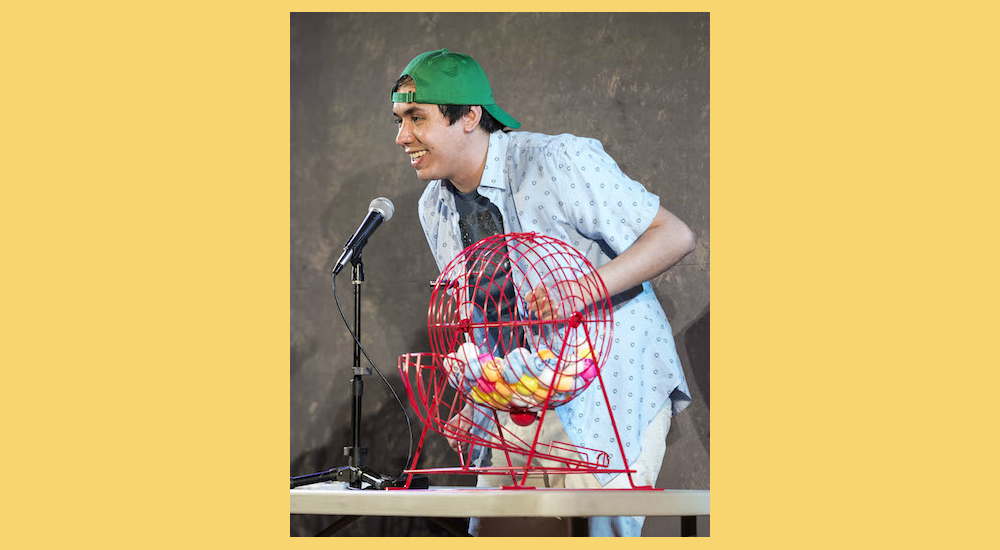