I am often asked why I stay in Israel if I disagree with its racist policies. The reason is simple: I live here. Getting up and moving to some other place is not an option, it will not change anything. It will not stop the injustices that take place here, or anywhere else in the world. I rarely go to reconciliation meetings or dialogues between Palestinians and Israelis, Jews and Arabs. Nor do I go to peace demonstrations or stand at intersections with placards denouncing the government. I covered enough demonstrations when I was a journalist to know that the most I’m going to get out of it is a little sugar rush for a bedraggled peace process.

But once a week I get up at the crack of dawn to travel to the Tarkumia checkpoint that divides the West Bank from Israel. I volunteer with The Road to Recovery, an organization that collects sick Palestinian children from the West Bank and Gaza borders and takes them to and from Israeli hospitals. The organization, established back in 2005 by Yuval Roth, an Israeli whose brother was killed by Hamas militants in 1993, has about 600 volunteers from all over the country. They sign up every week to either take Palestinians to hospital or to pick them up after treatments. The night before, each volunteer is contacted and final instructions are given. Sometimes, rides are canceled if the family fails to obtain the necessary documentation to exit the checkpoint. It’s as simple as that.

The first time I drove there it was 5:30 in the morning and the sun had already begun to rise gently over the low hills of Judea. A jackal slunk across the road, a slip of silver on the dusty road. I turned left toward Hebron and a flock of starlings swooped up into the air. As I drove, the phone rang. It was Ituran, a tracking service I subscribe to that locates stolen vehicles. Are you aware that someone is driving your car into Palestinian territory? the voice on the other end said. Yes, I laughed. It’s me.

As I drew nearer to the meeting place, I was overtaken by minibuses and trucks traveling at crazy speeds to pick up Palestinian workers at the bustling checkpoint. Hundreds of them stood at the circle as I draw up in my little VW. They held plastic bags containing pita bread, olives, labneh. They milled around or sit hunched on the ground, smoking cigarettes.

That first time, I admit, I was a little scared. How would I recognize the people I was meeting there? All I had was a name, texted to my phone the night before. Salim abu Khamed, aged 10 months. So I cruised slowly around the circle, trying not to stare at the men, wondering if this could possibly be the right place. Suddenly, I noticed a lone woman on the other side of the circle, dressed from head to toe in black. She waved to me and smiled broadly, and I waved back instinctively. Our eyes met. She was holding a tiny baby in her arms. A large bag rested on the dusty ground. I parked the car by the broken curb and exited the car. It felt awkward, a meeting between two complete strangers. We shook hands. Salim? I asked, pointing at the baby, and she nodded, already bundling Salim into the baby chair in my car.

We headed for Sheba Hospital, on the outskirts of Tel Aviv, where Salim has been undergoing treatment for the past few months. The journey takes about an hour at that time of the day. On that first journey, the mother sat in the passenger seat, looking straight ahead, fingering beads the color of a pale ocean. As we turned off the highway and approached the hospital entrance, she began to cry. I kept driving. Even if I spoke Arabic, I would not have known what to say to her. I pulled over to a small station to the right of the entrance which Palestinians must pass on foot before entering the hospital grounds. All the other cars enter through the left-hand side. The woman wiped her face with the back of her hand, took her bag, and left the car. I drove through the barrier to the other side and waited for her, Salim still in the back seat, strapped into his chair. While waiting, I turned round and smiled at Salim. He looked at me questioningly.  Kol shi tamam, I said to him, suddenly remembering a phrase I learned at the Arabic course I took a few years ago. Everything is okay.

Taking your child to hospital is tough. I know because I did it for years with my own son, Daniel, who was born with a rare genetic disease. There were blood tests, surgeries, examinations, consultations. Sometimes I would bang my head against the steering wheel of the car before we set off for hospital. I dreaded those appointments and hated those journeys. I hated the endless waiting in corridors, the questions, the not knowing. Despite this, I was privileged to be able to travel there in my own car, without the added hassle of obtaining permits and standing at checkpoints at dawn. Sometimes I would take Daniel for ice cream or some other treat in Tel Aviv after our hospital visits; sometimes we just drove straight home.

Now Daniel is grown up and I take other people’s children whose parents mostly do not speak either Hebrew or English.  My Arabic is minimal, despite the fact that I have twice tried to learn it. Perhaps part of the problem was that I had no one with whom to practice Arabic between classes, no one who could answer my clumsily-pronounced questions: Kif Khalek? How are you? Hon inte sakhne? Where do you live?  For this reason, it would be a stretch of the imagination to claim I am actually having a dialogue with my passengers. Usually I stumble through a few simple sentences before sinking into silence. I don’t know how to say I sympathize with them or know what they’re going through and perhaps I don’t even need to. And perhaps this is a real, hands-on dialogue of a different sort. Either way, The Road to Recovery has given me a golden opportunity. Now I can practice my Arabic.

A week later, I do it again. At 5:45 there’s a traffic jam of minibuses and trucks leading to the circle. I wait my turn and slowly drive around the circle, my eyes scanning the verges for two children, one aged 11 and the other seven. One is waiting for me with his father, a green hospital mask to his face. I pull over to the side of the road, roll down the window, lean toward them and smile. Sabah el-hur I say. I don’t care if I’m saying it wrong. Boker tov, the bespectacled man replies in Hebrew. He tells me the name of his son and I check the SMS I received the evening before. Yes, Muhammed abu Sahn. As Naim, the father, helps his son into the back of the car, a woman in a dark green hijab scurries up to the car, a skinny child in tow. She was detained at the checkpoint and is flustered at arriving late. A hospital mask hides her son’s face, a blue and white baseball cap is pulled down to cover his eyes and hair; a red hoodie covers the baseball cap. I don’t need to ask what he suffers from.

Naim, 40, speaks Hebrew. We slip easily into conversation. He tells me his family comes from a nearby village and that he and Muhammed got up at 4:30 in the morning to make it through the checkpoint by 5:45, so as not to keep me waiting. Mohammed has leukemia and is awaiting a transplant. Meanwhile, he travels frequently to Sheba Hospital for tests. He doesn’t go to school or meet friends.  The risk of infection is too great and most of the day he spends watching cartoons on a cellphone. Naim works as a plasterer in Beersheva. His Israeli boss only pays him for the days he works. No sick days, no compassionate leave, no vacation. I think back on all the days I spent taking Daniel to and from hospital when he was a child, and how understanding my own boss was.

A couple of hours each week does not seem like a whole lot for me to give. I have an excellent role model for this: My Aunt Sheila volunteered for years in a hospice in Blackpool, England, straightening sheets, arranging flowers and dispensing cups of tea. “A smile goes a long way,” she always tells me, even today at the age of 92. Aunt Sheila taught me the power of the simple acts of everyday life. I cannot change the way things are here in Israel, I cannot break down borders or bring everlasting peace to the world but I can make small changes for real people.

Naim is polite, he answers all my questions patiently, a trace of tiredness in his voice.  They’re still looking for a donor for Mohammed. There’s a long road ahead for us, he says as I pull in to the hospital entrance, stopping at the curb so that Naim and the mother of the thin boy can present their credentials to the guard on duty. I drive through to the other side of the barrier, the two children still sleeping in the back.

Five minutes later, the parents get back into the car and we proceed to the children’s section of the hospital. In a few moments my job will be over and my passengers will enter the building and disappear. I will drive home, alone. As we pull up at the entrance, I ask Naim to tell the woman I wish her baby well. We shake hands. Shukran, she says, gathering up her bags. Afwan, I say. It was my pleasure.

The names of people in this essay have been changed. 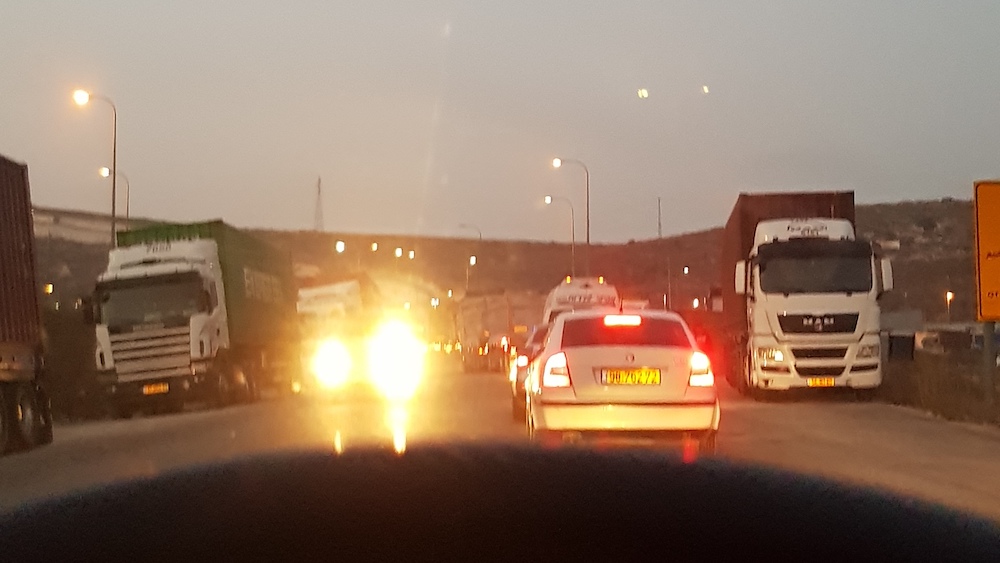