I spent an unhealthy amount of time this past year wondering if I am doing enough and if I am enough. I am constantly searching for answers on how to be a human in this world, and I am not alone. On election night in 2016, artists across the country asked themselves, “How does my work matter at all anymore? Do I drop everything and become an activist?”

Spettacolo is a documentary film about what happens when an ancient town in Italy, with a rapidly dwindling population and economy, puts on an annual play (Teatro Povero di Monticchiello) about their own lives and struggles. Through the process of discussing, writing, producing, and acting out the play for an audience, the townspeople gain insight and answers to their problems. Unlike anything you would expect out of a medieval, small town in Italy, the plays are experimental and the actors often play themselves. They call it an “autodrama.”

Montichiello is a walled hilltop village of less than 200 people. In winter, the town holds meetings to discuss what the topic of the summer play will be. Handmade signs are posted. Anyone can attend. The townspeople gather and talk about their problems, local happenings, politics, and the economy. Sitting quietly and listening is Andrea Cresti, director and writer of the play, and main character of the documentary.

The people of Montichiello sit in folding chairs and heavy coats, discussing the corruption of the government, and what seems like a hopeless situation in terms of poverty, lack of affordable housing, and lack of jobs. They are mostly elderly people without formal education. A woman who looks and sounds like my 93-year-old grandmother, who grew up on a remote farm on the front line of the war, in a town totally destroyed by bombs, spoke of the “barbarism of modernity.” These are words my grandmother would never use — words she has never heard. But the two women were raised in so many of the same circumstances. And this Montichiello woman has been engaged in a critical thinking process every winter and spring for the past 50 years.

Cresti listens to the townspeople and eventually proposes a theme for the summer play: The End of the World. Filmed in 2012, Spettacolo’s production spans 6 months. 2012 seems a lifetime away from the horrors of 2018, yet the woman who reminds me of my grandmother says, “Everything we fought for — democracy. Is it still democracy?”

This is a question we have been asking ourselves here in America, a question tinged with the naiveté that we are somehow unique in the horrors of living under an amoral narcissist. “How did this happen?” We ask ourselves this because most of us have never fought for democracy. This old woman has, as has nearly everyone in this town. The first play, produced in 1967, dealt with the near execution of everyone who lived in the town during World War II when a German commander suspected the townspeople of treason. They had been aiding, housing, and protecting young men and women secretly fighting the Nazis.

When Trump won and I thought it was the end of the world, my grandmother reminded me, “I lived through Mussolini. You’ll live through this.” What she meant was, this is not the end of the world. This is just The World. It has always been this way. The rich and powerful have always tried to remain rich and powerful by stealing from and abusing the poor and less powerful. Those with power, in an effort to maintain power, are always corrupt. My grandmother does not see history as a march of forward progress — she sees it as one continuous battle.

I am sensitive and melodramatic, prone to anxiety and depression. When I am bombarded with relentless horrible news, I don’t get angry — I shrink back, cower in a corner, and cry. I hate calling my representatives, but I will do it if I am feeling mentally well, and capable — especially if it’s a local issue, such as a father being deported in front of his children. I will write letters, emails, and faxes. I will try and fail to talk to family members who support the current administration. I will try and fail to write and publish. Most of all, I will fight my overwhelming hopelessness and apathy. I will fight to remain empathetic and positive. I will fight to instill these values — hope and empathy — in my daughter and my writing.

It doesn’t do anyone any good if I stare at screen, read the news, and cry all day. I will learn that I am allowed to look away. In fact, it’s what all humans must do to survive, briefly filter out the horror in order to be able to find joy. We are not meant to be aware of every horror simultaneously. We cannot handle and process it. I can’t.

The play produced in Spettacolo asks: “Is it the end of the world? Yes, or no? Are we cynical? How should we be? What should we do? Is there any hope?”

Cresti presents two options to these questions: There is no hope. Or, all we have is hope, our community, and each other.

These beautiful, heavy moments of the documentary that seem to answer every question about creativity I’ve ever had are interspersed with moments that seem like paintings; Andrea mowing the bright green grass of his lawn, a cat stretching and yawning against the backdrop of the weathered stone wall of the town, an actor practicing her lines as she hangs her laundry on a fence next to a tree, with the rolling hills of Tuscany behind her.

An earlier play, during a different year, featured performers walking around with shopping carts that held a product in a box named Zollet. There were jobs for everyone and business was booming. Some people became curious as to what was inside the packages; others insisted it was better to not think about it too deeply and enjoy their good fortune. Eventually, a group of people broke open the containers. Inside each was a piece of their land. They had been selling their land, their home.

Cresti speaks carefully in gentle, poetic sentences. He is a brilliant, passionate, singular person. He has put his whole heart and nearly all of his life into this small production, in service to the couple hundred people who live there.

“Why do we do this strange vigil?” The play asks. The answer: “To help us live better.”

We don’t have to change the course of the world. We can merely serve our community, however small it may be, and help each other live better. Even if that means doing strange, uncomfortable, previously unthinkable things, like putting on a postmodern experimental drama in the smallest of Italian farming country. The magic of the play, Cresti believes, and its success hinges on the willingness of the people to struggle forward together and believe in what they are doing. We have to continue to believe, he insists, until the very end. “What matters,” Andrea says to the players and townspeople before opening night, “is that we did this together.”

What can we, as artists, do right now? We can take part in our community, cultivate it, nourish it. We can care for each other. We can reach out to other communities. We can try to connect. If it seems too hard and too overwhelming to constantly fight forces much larger than us, we can instead turn towards each other, and feed the fire in one another’s hearts. 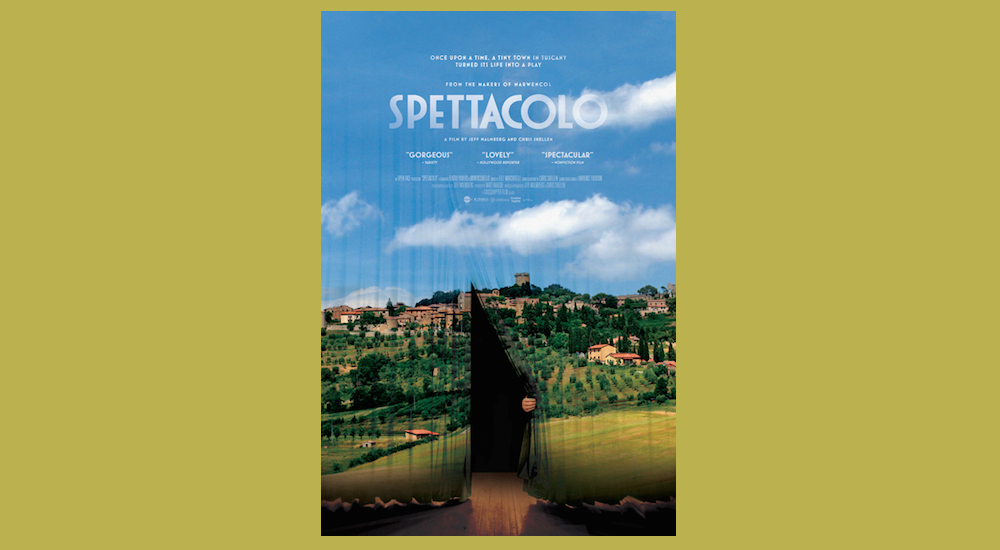