Don’t laugh, but we have much in common. You may be wondering what, since I’m a female Pakistani immigrant with about $1,200 to my name and you’re a white man with $10 billion (a fuzzy number from your camp but let’s roll with it). I’m a nobody and you’re a Presidential candidate. I chop off heads and you create jobs. If we were pantry items based on our skin color I’d be cocoa powder and you’d be dried apricots. We’re different. I get it. But hear me out.

After these past few weeks, I’ve never felt closer to you. We’re kindred spirits now, two peas in a pod forever bonded over an experience not many in this world have shared: the Pakistani parental scold.

Your dried apricot ears perked up.

“Have you even read the U.S. Constitution?”

The speaker had an accent, but strangely, the audience didn’t care. In fact, the more he spoke, the more people arose from their seats, screaming out, enraptured. He held up a copy of the Constitution and they lost it. This man, who you learned is a Pakistani-American named Khizr Khan, the father of a U.S. Captain who died saving the lives of his fellow soldiers in Iraq in 2004, was igniting a fire at that liberal snooze fest like no one who had come before him, even all those career politicians. “You have sacrificed nothing,” Mr. Khan said directly to you. “And no one.”

I mean, lots of people at that convention said nasty things about you. They called you a demagogue, a hypocrite. Said you had no clue, were full of malarkey. But Mr. Khan’s speech? It torpedoed through your poll numbers, Neilson ratings, private jets, tailored suits, campaign rallies, KKK supporters, Twitter account and Putin snapchats and reached your vulnerable, spray-tanned underbelly. You felt it was vicious. You felt attacked. I know because you tweeted “I was viciously attacked!”

Pardon me for invoking the words of your opponent’s husband, Mr. Trump, but I feel your pain. I really do.

See, when I was sixteen, I failed pre-calculus. Despite forging my father’s signature on my report card and hiding it in my blue, dolphin-themed Trapper Keeper, he called me into his study one day and there was my report card on his desk, fat circle around the “F”. I prepared my defense. I would explain to my father how bad my teacher was, how ridiculous it was to have to learn complex math when I wanted to be a Julio-Claudian era history scholar. How the school was wasting resources. How the American educational system was failing me.

Peering down at me through thin, gold-framed glasses, my father questioned my intelligence, integrity, motives and character within the span of eighty seconds. Peppered throughout were rhetorical questions about why he gave up everything in Pakistan just to immigrate to America to see his kids fail. I never learned my parents’ native tongue of Urdu, but he said something in that language that I think translated to “loser.” He lifted his hand as he spoke to me, just like Mr. Khan. He used few words with razor sharp precision to slice at me deep, just like Mr. Khan. I felt viciously attacked. His scolding burned and infuriated me and I fought back with every argument, pout and declaration of how unfairly I was being treated.

And how did that work out for you, Mr. Trump?

Mr. Khan hit back at you so fiercely and effectively you begged other Republicans to jump in and help. Then, proving himself too formidable an opponent, you pivoted towards the mother, Ghazala. Standing on the DNC stage quietly submissive to her husband with her head covered as their religion dictates… what an easy target. You could say she “wasn’t allowed” to speak—a personal dig at the Khans while reinforcing negative images of Islam. It was a two-for-one deal no businessman who changes the skyline of Manhattan would turn down.

But she schooled you too.

You must be so confused. When you entered this race, you had a list of opponents: the Clintons, Jeb Bush, Ted Cruz, the media, Priorities USA. The Khans were not on that list. They’re Muslims, and Muslims are ISIS-loving low-lives running by the thousands across the Syrian border with Wisconsin to kill Americans and blow up their cul-de-sacs. They’re not supposed to be intelligent, dignified, well-spoken individuals capable of resonating with other Americans. If only your anti-immigration policy was enforced years ago, maybe the Khans wouldn’t be here and you wouldn’t be in this mess to begin with.

I wish you would have come to me first, Mr. Trump. I would have warned you what it was like going up against Pakistani parents, especially ones who have immigrated to this country. See, the thing about people like my parents and the Khans is that they’ve been through some tough shit. They’ve lived through wars and dictatorships in their home countries and readily forfeited their degrees and whatever status and income they once had to start over in America with nothing. Once here, they’ve faced institutional discrimination, ridiculed for their accents, harassed on the street, told to get out. They have to prove they belong here, or at the very least, are not societal burdens. They must keep quiet, work hard, continually showcase their loyalty to America. Pass the model minority test. They are held to a higher standard of conduct and productivity in this country than everyone else, so when they hold others to a high standard, whether it’s their children or their Presidents, it’s kind of fair, don’t you think?

That’s what my father did to me, and that’s what the Khans did to you by asking you to adhere to the principles upon which this country was founded. Hold us to higher standards than we were exhibiting.

I was failing school and you’re failing a Presidential candidacy. You needed scolding, Mr. Trump, and the Khans were always going to be the ones to do it. They’re Pakistani Muslim immigrant parents who have higher stakes in the outcome of this election than you. They’ve lost their boy. Now they might lose the country they love, the one they’ve risked so much to live in. You would simply lose.

“Am I not allowed to respond?” you asked.

Well, you tried, Mr. Trump. And you sounded like a 16-year-old girl. Try sounding like a President instead. 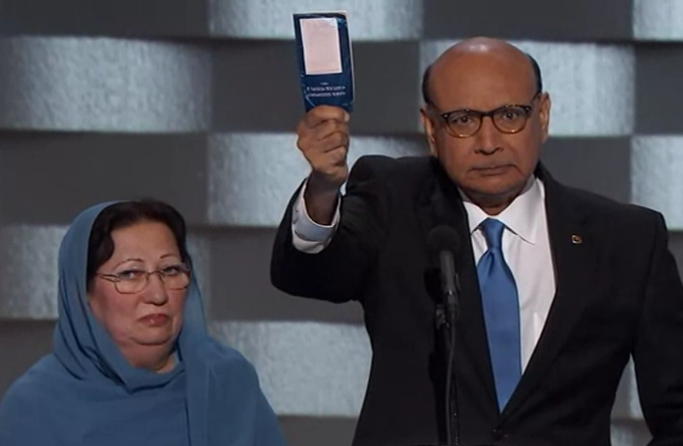