On November 4, 2019, Maria Jammal was awarded the Princess of Girona Foundation International Award for her outstanding work in mental health support for refugees. The prestigious prize was given to her in Barcelona, in a ceremony presided by King Felipe VI and Queen Letizia of Spain. By giving the prize, the Spanish Crown aims to set an example for the country’s youth.

When Maria and her husband Essam Daod returned from Greece after the summer of 2015, they felt they had to extend a helping hand to the refugees that were landing there. Like many who became volunteers during that time, they could not remain passive observers on the wayside. Yet they were also sharply critical of what they saw on the islands, with many at that time offering amateurish assistance that could also be harmful.

Two crucial insights separated Maria and Essam from the vast number of newly minted humanitarians and led them to start “Humanity Crew.” First, they immediately understood that humanitarian assistance had to include a major component of qualified mental health support. While this may now seem clear enough, they were way ahead of the curve in terms of the response to the “refugee crisis” (now a permanent condition). They argued this on medical grounds. Unable to receive treatment for mental health issues, refugees tend towards somatization: developing more acute conditions, which then become more dangerous and expensive to treat. But they also offered a policy argument directed at national security interests of “host” states. Untreated, trauma and depression can lead members of refugee populations towards fundamentalism.

Second, they returned convinced that any attempt to provide mental health assistance that didn’t recognize the specific cultural backgrounds of asylum seekers may become counter-productive. The adverse consequences of a culturally blind approach to mental health were already visible early on after the asylum seekers’ arrival. Important initiatives often sought to empower women, in an agenda combining mental health with a certain kind of feminism. Yet the result was that after horrid journeys in which men were struggling to perform the social requirements of traditionally patriarchal masculinity, they had to adjust. This was difficult and many men were quickly left behind, languishing in depression, angry, and helpless.

Surely, Essam and Maria were not the only ones to notice this dynamic. As Thea Hilhorst observed in 2016, male refugees are “increasingly seen as a dangerous and ‘criminal’ other”:

Psycho-social assistance often exclusively focuses on women as victims of violence. Men could be forcibly recruited, tortured, molested, shot or castrated, but their involvement in psycho-social support projects is rare. When these projects reach out to men, it is usually to engage them for the cause of women and make them advocates to stop violence against women. During my research I have seen numerous social projects for refugees, and I have not encountered a single exception: all projects are for women only.

As Edward Said has emphasized, references to “Oriental” culture are often implicated in prejudice. Such ideas about the traditionally patriarchal masculinity of Arab men may therefore generate some discomfort among European observers. Such orientalization often reinforces a colonial imagination that flattens the nuances of gender identity and removes non-Europeans from their historical contexts. Yet by emphasizing common language and an understanding of culture as necessary for the treatment of trauma, Humanity Crew did not describe Arab culture from an external position. Rather, they referred to a culture they shared. They did not only address clinical, humanitarian, or policy needs (all of which have often applied an orientalist and objectifying framework on peoples of the Middle East). They also referred to where they came from. What may seem from one perspective like an orientalist caricature becomes a radical move: it imaginatively suspends relatively new borders that have violently imposed upon the region by European empires, and later by Israel.

As Arabic speaking professionals from the region — Maria is a lawyer and Essam a psychiatrist — they felt that they were uniquely situated to offer help that wasn’t otherwise available. Indeed, the vision Humanity Crew introduced does not only require an expertise in mental health or unmatchable organizational skills. What is also at stake is an ability to reimagine ways of belonging to the region which defy contemporary conventions and alignments. Since the Middle Ages, residents of the area were part of one larger region, often referred to as “greater Syria” (Bilād ash-Shām). Through mental health support, it was possible to resurface and revive something of that common sense of belonging.

When Israel was established in 1948 the connections between residents of “greater Syria” were cut. Israel denied the return of about 700,000 Palestinian refugees who were displaced during the war. Many longstanding residents of the Northern area of the Galilee fled into Syria and Lebanon, which were now behind militarized borders. Refugee experiences are part of Maria and Essam’s family histories. Like many members of Jewish refugee support organizations, they bring to their humanitarian work their families’ traumatic memories.

The very fact that the organization began by asserting a solidarity between Arab-speaking groups defied the standard humanitarian narrative of “saviors and survivors.” For them humanitarianism was not about the white and rich extending help to the brown and poor. It was about a connection between groups who have similarly suffered legacies of colonialism and authoritarian rule. Refugees from Syria and other Middle Eastern revolutions and civil wars have often suffered unspeakable violence, indiscriminate bombings, and torture. Gazans under Israeli siege have joined the mix of Arab groups uprooted by war, dire poverty, and a gradually harsher climate. They too are among the new residents of Athens and Berlin.

While Palestinian citizens of Israel such as Maria and Essam don’t suffer such horrific conditions, they also belong to an oppressed group. Humanity Crew’s activists are often caught in a strange position. They hold a passport that can get them to Europe much more easily than citizens of other neighboring countries. (They are not immediately suspected of being migrants who will overstay their visas). Yet when they come back home, they are subject to discriminatory and often invasive searches by Israeli airport authorities. (Maria sued Israel’s airline, El Al, after experiencing a humiliating search.)

Yet there are two slightly ironic facts about this prize. First, it is given precisely with the rise of Catalan protests, demanding self-determination. In the days before the ceremony, a vast area surrounding the Palacio de Congresos was closed by a heavy police presence. During the ceremony itself, residents of Catalonia’s capital apparently took to the streets in great numbers. But we could not even see them and could only guess what was going from the choppers hovering above, or the videos shared on social media. In his own speech, the King alternated between Spanish and Catalan, referring to the country’s plurality as key to its unity. But for an organization whose members are experienced in what the denial of self-determination means, it may not be the perfect moment to receive a prize from Spain.

Second, the principal place where Humanity Crew has worked, Moria Camp on the island of Lesbos, is today by no means a model of success in mental health protections for refugees. Indeed, despite the copious media coverage and international attention it has received, the place continues to be the site of what what MSF has called “a mental health emergency.” As Jules Montague recently wrote, more and more children appear to display harsh symptoms caused by trauma. And as Mariana Karakoulaki recently reported, “Mental health specialists working in the camp say they came across children as young as two who appear to have suicidal thoughts.”

As MSF further explains, this emergency means, first and foremost, that the “containment of asylum seekers on the Greek islands must end.” But the fact that such policies have not yet ended, is not only a mistake. Perhaps we need a more radical shift in how we think about the provision of mental health for refugees, based on the participation of culturally related communities. Already in 2016, Hilhorst has observed that “organisations are starting to open up and recognise male gender-based vulnerabilities. The International Rescue Committee […] is one of the organisations reconsidering its gender policies…” But has this rethinking of gender gone far enough? In the bottom line the issue is not only about gender, but about the place of culture, history, and regional identity in the production of humanitarian work.

On this occasion of recognition for Maria’s work, it is worthwhile listening to Humanity Crew’s vision, which reimagines humanitarianism and transnational solidarity. To be successful, mental health care for refugees needs to build not only on the seemingly universal image of human experience that psychology and the natural sciences advance. Nor can it simply rely on a globally-applicable humanitarian bureaucracy of crisis. What is still largely missing, is an understanding of human experience from the perspective of shared regional histories. Thinking with Humanity Crew may provide a way forward.

Itamar Mann is an Associate Professor of law at the University of Haifa, a lawyer at the Global Legal Action Network (GLAN), and a member of Humanity Crew’s board. His book Humanity at Sea: Maritime Migration and the Foundations of International Law was published in 2016. 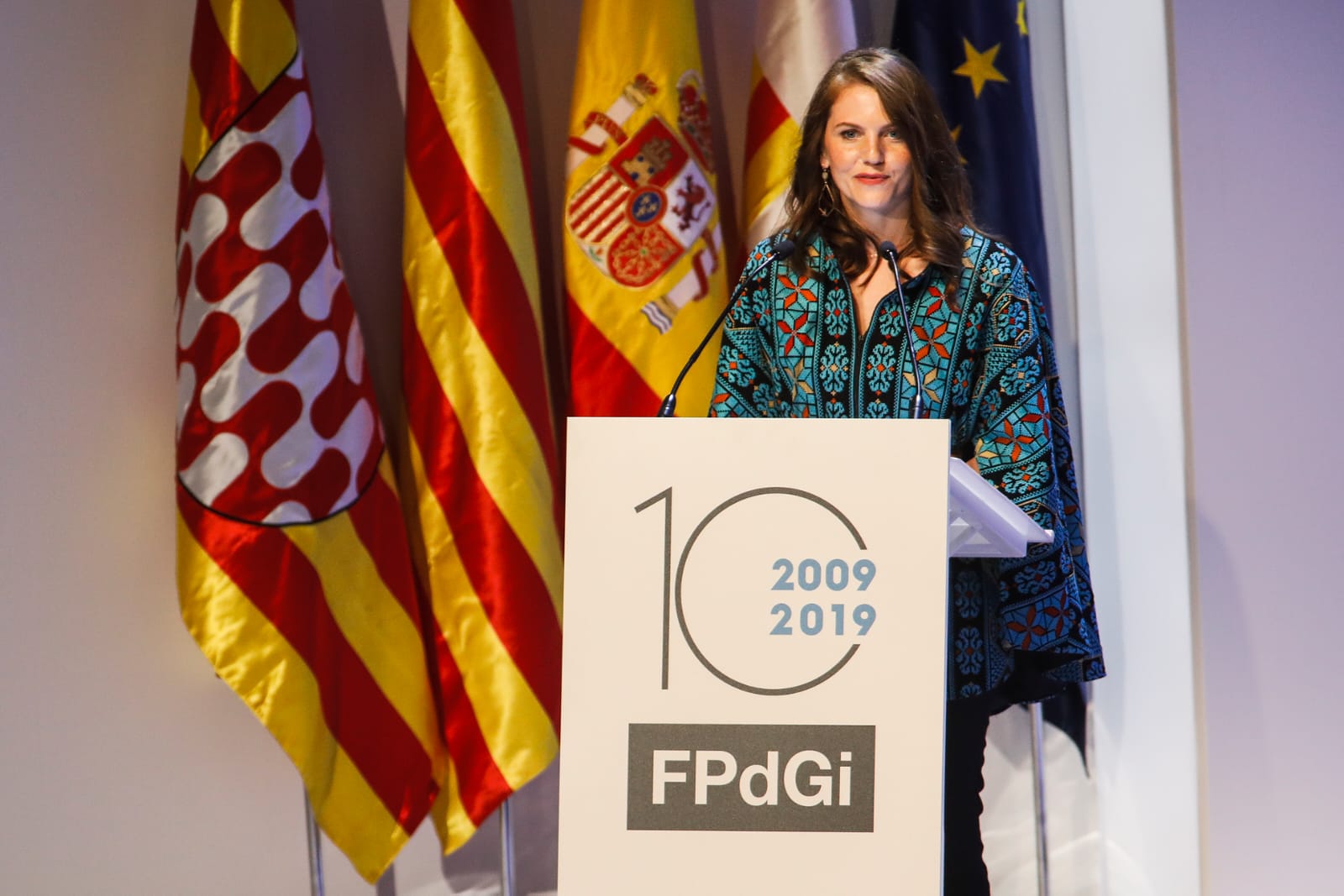