In the summer of 2010, I traveled to Rio de Janeiro to research the life of my estranged grandfather, American photographer David Drew Zingg. Because David had spent the final thirty-five years of his life in Brazil, I grew up knowing little about him. In college, I learned that my grandfather had been a celebrated figure in Rio’s music scene, designing album covers for legendary musicians and helping to organize the first bossa nova concert in the United States. My trip would allow me to piece together David’s story and make my own discoveries about his adopted country.

In Rio, I interviewed dozens of my grandfather’s friends and tried to locate important sites of bossa nova lore. One night, I went out in search of a bar called Bip-bip, which hosted live Brazilian jazz. I arrived early to find an elderly stooped man arranging a couple of tables on the sidewalk in front of the building’s closed façade.

The man’s ashy voice startled me. It was gravellier than any I had heard before — like that of someone on the verge of choking — and yet it suited him perfectly. A grizzled beard covered the man’s face and small glasses magnified his expectant eyes. He was short, probably about five foot three, though it was hard to say exactly because of his pronounced hunch. A sizable belly protruded from beneath his short-sleeved button-down shirt. He looked like a cartoon drawing of a bohemian.

I told him yes, I had come for the music.

“Tá bom,” he said. “The performance will start soon.”

After our short exchange, the man turned around and pulled up a garage-style door. Structurally, the bar looked identical to all the other botecos I had walked by that day: it consisted one continuous room that spilled out onto the street. Still, Bip-bip, now shining with light, stood out. Instead of a smattering of seating arrangements spread out around the floor, a long banquet table traced one side of the room. What’s more, photographs and paintings covered every inch of wall space, and most featured one unmistakable subject: the bar’s hunchback proprietor. Snapshots showed the man as a young, svelte Romeo with a luscious black beard. Hand-drawn caricatures exaggerated his long nose, his demanding scowl. One picture revealed his name in elaborate cursive font: Alfredinho, Little Alfred.

As I stared at the portraits, a group of white-haired musicians with instrument cases filtered into the bar. They walked into the back of the room, retrieved cold beers, unsheathed their equipment, and took seats around the banquet table. The percussion section positioned themselves at the head. A portly guy squeezed a bass drum between his legs; a blind man tuned his tambourine; a pale geriatric caressed a small, wooden box-like contraption. In front of the box player sat the only woman in the group — the singer, I gathered, from her lack of instrument. As the percussionists tinkered with their drums, she let loose a mane of wavy tresses. Across the table, the lead guitarist sipped from his beer can, his role apparent in both his posture (confident and erect) and his fashion sense (tortoiseshell glasses and a well-groomed silver beard). Three more men flanked him, holding identical instruments.

Four acoustic guitars? I thought. Isn’t that a bit excessive?

When the motley group began their jam session, they cancelled my doubts at once. Improbably, the four guitars danced in sync without stepping on one another. As the lead man choked a descending riff down the neck of his axe, another player fluttered his fingers upward for an ascending line in the highest register. Meanwhile, the third and fourth guitarists chugged along, plucking chords in interlocking rhythms. Beneath the melodic give and take, the percussionists established their own synergy. The squat man with the bass drum pounded the backbeat (bap-ba-DOOM, bap-ba-DOOM) while the tambourine player tapped out a uniform, hissing shuffle. The wan senior with the box played off his partners’ consistency, slapping hollow, syncopated accents to reinforce the guitarists’ articulations. It was clear that these men had played together for years.

By the time the band had run through its instrumental loop a few times, a large crowd had gathered in front of Bip-bip. On my left, an old woman in a black dress and flip flops planted sloppy kisses on friends from the neighborhood. Behind me, some tourists chattered in French. On my right, Alfredinho took a seat at the small table he had set up for himself. He scrawled notes on a clipboard ledger and kept one eye on the rotary phone in front of him.

After a few minutes of instrumental performance, a voice rang out: “Deixa, fale quem quiser falar, meu bem.” Amid the clutter of guitars, it was difficult at first to determine who was singing. While the woman with the white curls belted the melody, her body looked frozen. And yet, even without a microphone, her voice pierced through the wash of guitar and percussion, inspiring others to join her. All around me, onlookers began to sing along, first in a reverent murmur than in unhinged euphoria. The neighborhood woman in the black dress opened her arms and began moving her feet in a shaky, flip flop samba. “Deixa,” she shouted along, tunelessly.

As I listened, I wanted to sing, as well. The tune sounded familiar. It spoke of letting things be, listening to your heart, saying “yes” instead of “maybe,” because no one lives more than once. Perhaps my dad had played the song before, sometime in my youth, but I couldn’t say for certain. I stood silently and watched.

After the opening number, Bip-bip settled into a kind of rhythm. Occasionally one guitarist would leave the table for a cigarette and a member of the audience would step up and take his place. A few songs later, other musicians would cycle in and out. At this unusual bar, the line between performer and spectator appeared entirely fluid.

In the market for a beer, I studied the established procedure. To procure libations, customers careened dangerously close to the circle of musicians and visited the fridge in the back of the room. Then, they stopped by Alfredinho’s table, where the proprietor recorded their names in his ledger. Over the course of the night, patrons would give the bar owner a little wave every time they grabbed beers, and he would add a tally mark beside their names. The whole system seemed to hinge on the customers’ honest self-reporting; in a penny-pinching mood, one could easily sneak away with free beers. How trusting, I thought and then submitted myself to the process.

Over the course of the night, I struggled to read Alfredinho’s mood. When the woman in black came over and kissed the top of his head, he cackled. When the well-groomed lead guitarist sidled up next to him, they bantered arm-in-arm. Most of the time, though, the proprietor’s face remained twisted in its signature scowl.

Sometimes, he lashed out at audience members.

“Keep it down!” he hollered, his voice a frayed wire. “We have free music here!”

Other times, he chastised the performers. When the percussionists walloped a particularly vigorous rhythm, Alfredinho creaked out of his seat and waved his arms at the band, like a crazed conductor who’d lost control of his orchestra.

As the musicians eased up and the crowd realized what the old killjoy had done, some listeners protested: “Come on, man! It was sounding good. What gives?”

Alfredinho refused to tolerate the outrage. “We’ve got to moderate,” he said. “The neighbors complain.”

I was shocked. I had never heard of a music venue that required its performers to play quietly. It seemed unreasonable; Bip-bip didn’t even use any amplification.

Later in the night, Alfredinho made an earnest appeal to his constituents, pausing the music and launching into a speech.

“Bip-bip is a democratic bar,” he said. “It’s a space of resistance, Brazil’s cultural patrimony. Here, we don’t just listen to music, we gather together to support one another. We have a duty here to love our neighbor, to lift up those less fortunate than ourselves, to remember the ones our society has forgotten.”

Alfredinho spoke as if delivering a sermon, pacing back and front in front of the silent crowd, pointing his fingers in every direction. With each step, he trained his eyes on a different member of the audience, and I began to wonder whether my grandfather had ever been to Bip-bip. A plaque above the door declared that the bar first opened in 1964, the year that David moved to Brazil. Alfredinho’s establishment was located just a few blocks from Au Bon Gourmet, the defunct bistro where my grandfather had heard bossa nova for the first time. Was my experience at Bip-bip anything like the transformative night David spent listening to bossa nova’s forefathers, João Gilberto and Antônio Carlos Jobim?

After a few more hours of music, I decided to call it a night. It was 2am, and Alfredinho remained at his perch, a makeshift cash register of stacked bowls now overflowing with bills. I approached and told him I’d like to close out. As he flipped through his ledger, I swore I caught a fleeting glance at the name “David Z,” struck through in blue pen. I blinked twice and told myself I had dreamed it up.

This spring, eight and a half years after my first visit to Bip-bip, I learned that Alfredinho had died. Upon hearing the news, I thought back to something one of my grandfather’s colleagues, a former model, had told me. “Brazil has no memory,” she said. David’s collaborator was referring not to the recollections of individuals, but to her country’s institutional memory. The way she saw it, there was no infrastructure for commemorating artistic forbearers, no investment in preserving cultural history. She decried the fact that one of Rio’s most esteemed legacies — the Golden Age of Bossa Nova — had been relegated to a few rusty plaques and kitschy tourist bars.

Bip-bip refused to take part in such marginalization, resisting erasure for more than fifty years. But Alfredinho’s death poses a question: what will become of the establishment without its uncompromising leader? For now, the nightly jam sessions continue, but it’s quite possible that Bip-bip, like most other bars, will eventually shutter. The plaque above its door may well rust over, and those of us lucky enough to have enjoyed the music will cling to our memories. When institutional preservation fails us, personal recollections are all we have left. In the wake of Alfredinho’s death, I choose to commemorate the hallowed space he created, a portal connecting me to my lost grandfather. 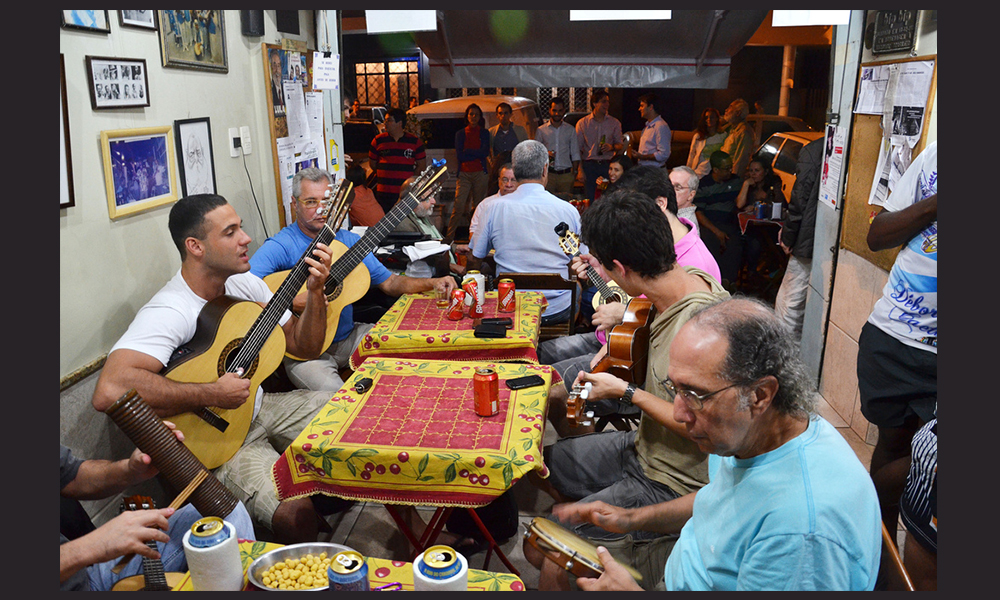