On Sunday, April 30, a white man said to be despondent over his financial situation and a recent breakup with his girlfriend opened fire on a birthday pool party in a San Diego apartment complex. 49-year-old Peter Selis had sat in a lounge chair by the pool until the host of the party came over to invite him to have a drink and something to eat. He responded by shooting the host, the man whose birthday was being celebrated, twice. He then called his ex-girlfriend and made her listen to what he did next: continue to shoot, while sitting in the lounge chair, “his beer in one hand and his gun in the other,” according to one witness.

He shot seven people, one fatally. Five of the victims were African American. One was Latino. One was white.

After initially reporting the race of the victims, SDPD chief Shelley Zimmerman said only hours later that there was “zero information to indicate that race played a factor in this terrible and horrific crime,” and that Selis was motivated by the breakup with his girlfriend. But witnesses who were at the party wonder why the possibility of a racial motive was dismissed so quickly.

What is known is his choice of victims, that he let a white woman who was trying to help her friend, a black woman named Monique Clark who would later die in the hospital, escape, telling her, “You can either leave or you can stay here and die.” He chose not to shoot at a white security guard when he had him in range. Police Captain Brian Ahern offered counter-evidence, noting that Selis did not shoot two African American people closer to him than the partygoers. One black witness claimed Selis didn’t shoot him because he recognized him as a former work co-worker.

Was the shooting racially motivated?

The killer left behind no signs of any racial animosity; there wasn’t “any gesture made by the suspect, any note left, any writings, text messages, social media postings, or propaganda,” said Ahearn.

Selis was fatally shot by police when he pointed his gun at them, leading some to speculate that he was attempting suicide by cop. But the reality is, as is said so often of these mass shootings that it’s almost a cliché, we may never know what the man’s motivations were. “We’re left with trying to piece together what happened without being able to ask him,” Ahearn said.

“We cannot understand what would have caused Pete to do this,” his family said.

Many comments on the Los Angeles Times and San Diego Union Tribune articles disagreed with the witnesses who believed that Selis acted out of racial hatred. Some went beyond mere disagreement: they seemed angry that the possibility was even raised. A few complained about “Section 8 Housing” and “being tempted to do the same thing” when “they” made too much noise.

La Jolla Crossroads, where the shootings took place, is in an affluent area near the University of California. Rent for a one bedroom apartment starts around $1850-$1950 a month. “Picture yourself in a Mediterranean village,” the website says, “the aroma of fresh food, the chatter of people in the park and an easy stroll to shops and fun… Enjoy a tasteful blend of architectural details, flowing fountains, draping flowers, and unprecedented collection of contemporary art. La Jolla Crossroads also offers a deli, a dry cleaner, a hair salon, and more!” Many residents work at the university or at the surrounding hospitals and medical centers and tech companies. News coverage called the site of the shootings “University City” but as a native San Diegan, I’d never think of it as that.

When I was a kid, this neighborhood — if you can call it that — didn’t exist. It was nothing more than a flat mesa, with coastal sage and chaparral, and the occasional deer.  I lived in the original University City south of here, tract homes built with the professors of UCSD and their families in mind. I was born and raised in San Diego and went to college at UCSD. Now squatting on the empty mesas of my adolescence  are two shopping centers along with the medical centers, tech companies and massive blocks of apartments. La Jolla Crossroads is one of those, a hulking stucco complex that casts its own deep shadow on the newly developed landscape. It does not exactly look like a Mediterranean village. The “shops and fun” they mention would be University Towne Center, a shopping mall about an 11 minute walk away, through other blocks of apartments and condominiums, along a raw unfinished road.

The San Diego pool party shootings were a national story, for a day or two. I donated to a GoFundMe drive for Monique Clark, the one fatality of the shooting. She was a 35-year-old mother of three kids, the youngest of whom was only two and a half, a pretty African-American woman who took care with her makeup and her selfies.

Her last words, a witness said, were “tell my kids that I loved them.”

An update on the GoFundMe for Monique Clark said that there would be a vigil held for her at La Jolla Crossroads. I decided I should go.

“Why?” a friend of mine wanted to know. “For research?”

I’m a writer, and it was a fair question. The day of the pool shootings, I sent a completed novel off to my agent. Mass shootings in San Diego are a major plot thread. There had been a number of times while I was writing this book that I’d been afraid to write it, because I was afraid that I was somehow summoning these kinds of incidents into reality by writing them. But that’s the weird narcissism of a writer, and I knew I had it backwards anyway. I was writing the book because these things were real, happening every day in this country, the latest senseless slaughter taking the place in the public eye of the one before it.

Those people should have been safe. They should have been able to go to a birthday party without being shot by a man who wanted to die but had to take other people with him, who forced his ex-girlfriend listen to him terrorize and murder as punishment for breaking up with him.

The sidewalk next to the vigil site was lined with TV news trucks and cars with press permits on their dashboards. Reporters, small, thin women in jewel tone blouses and camera-ready makeup, waited by their photographers. People filled the bowl-like grassy area in front of the leasing office of the complex. The crowd was mostly African American, then Latinx and white and others from the mélange of cultures and races who live here.

Monique Clark’s family and friends, along with several pastors from different area churches, gathered near a large abstract bronze sculpture constructed in swooping curves, wedge-like scimitars, teddy bears and flowers piled around it.

I didn’t hear all of what was said. I was a few minutes late, and they spoke through a small speaker and it was hard to hear, especially at first, when grief overwhelmed the mourners’ voices. But at one point, a woman who said she was Clark’s aunt took the microphone. She was Latina, I think. She smiled and said, “We’re Monique’s family. As you can see, we’ve got just about every shade up here” — she gestured at the people gathered around her — “so we know all about tolerance.” It was said as a joke, about families, how they fight. And it was true, what she said. Clark’s family was black, Latinx, white. A white woman held a black toddler; she might have been the partner of the black man at her side, or they were just trying to comfort each other in their shared grief. Clark’s two older daughters were also there, lovely girls with tight braids, holding each other, sobbing.

I looked to my side at one point. I saw a young woman sitting on the grass next to the box that had held vigil candles, her hands covering her face, tears smearing her carefully applied mascara and eye shadow. Was she one of Clark’s many friends?

A white woman got up to speak saying she didn’t know Clark. She worked in the neighborhood, and she stumbled on her words, her sentiments, but she wanted the family to know, others would have been here if they could. Workers in the medical labs, students in their classrooms. Her daughter worked at the airport, where Monique had worked. Her heart was breaking just like theirs.

An older black man spoke, short, stocky, with a military cap. “A pastor, also a chaplain, for the US Navy first, for the prison, last.” And he was angry that people were trying to separate him from his white friends, he said. He’d seen people help each other in the prisons; in spite of everything, white men would become friends with black men. “Don’t you think these people won’t defend you,” he said. “They will. I’ve defended them.”

I’m not sure what either of them meant, entirely. Their grief and anger was at times awkward, inarticulate. And we can be so careful of our words when it comes to race, careful not to offend, not to overstep. They were not careful. They had things they needed to say.

One of the last speakers was another pastor, a tall African-American man with graying hair who was one of the vigil’s leaders. He seemed to be almost puzzled at times, searching for an explanation that eluded him, looking for meaning in an act that was about the kind of rage that swallows meaning whole.

“When this is over, find someone who doesn’t look like you, someone of a different shade,” he said. “Introduce yourself. Give them a hug.”

I might be a native Californian, but hugging does not come naturally to me. Still, I tried. A woman and I briefly embraced. I touched the shoulder of a man who was already leaving, who seemed not much into hugging either.

I stood on the grass a minute longer, watching the family, watching people leave, tears streaming down my face. I could not stop crying, and I don’t know why. It was everything, I guess. What had happened, what the pastor had said. The times we’re living in.

A young black woman came up to me, smiling. She was beautiful, her features rounded like they were sculpted, her honey-colored hair in cornrows. She hugged me. I hugged her back. We stayed that way a while, holding each other tight. For some reason, neither of us wanted to let go.

I wanted to say that it was the least I could do, but all I could manage was, “Thank you.”

And I’m still not sure what it means.

Here is a GoFundMe blog post detailing the fundraising efforts for the victims of the La Jolla Crossroads shootings. 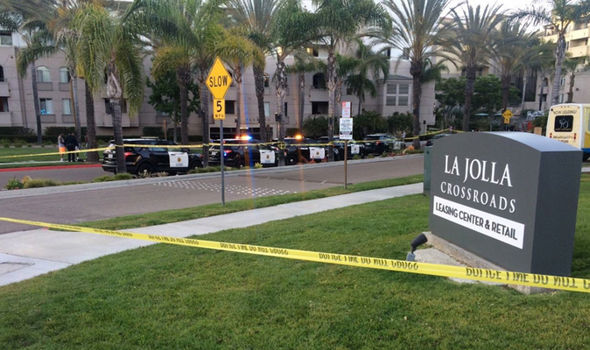