Underworld. In London in 1863, sulphurous gas belched from the new Tube tunnels up to the streets, and families feared they’d be poisoned. In Portland in 1870, a hole could open under a robust young man, and he’d be whipped into the Shanghai Tunnels and out to indentured servitude at sea. Here in downtown Los Angeles, 11 miles of secret subterranean passages once trafficked prisoners, secret money, and mob victims’ corpses. It’s dark down there.

But isn’t it dark up here, too? A wise man said, “the sun will rise in the morning,” and it did, but its light was thin and acid, a death wheeze. Light comes from above; any child knows that. But soon what’s up there will glower down darkly. The air is already turning murky. Where to find light now?

The lore that teaches us to fear the underworld teaches us to fear each other. Yes, the space is heavy with the weight of cleared earth and what once was. It’s a foreign dimension. You feel that, standing at the lip of this gaping maw.

To ride LA’s subway is to remember that you live in a city. This is what cities do: force shoulders to rub despite the impulse to retreat, separate, wall. A train carriage cradles travelers in pure humanity — even, especially, the parts we try not to see, but need to see most. By 2021, this breach will join Long Beach to Azusa to Santa Monica to East LA. Sparks from the friction of human against human will give a different kind of light, deep below the earth.

This corner once held Blondie-Bowie-Warhol hangout The Atomic Cafe; later, the legendary hotspot the Troy Cafe. Later still, of course, it was a Señor Fish. Hard to deliver that punchline without a sense of decline. This chasm, municipally administered and all, will bring the music back: the punk, the spark of resistance in togetherness.

Which isn’t to say it’s harmless. At the bottom of the pit waits the tunnel-boring machine, named for a woman — a tradition, we can guess, inspired by the machine’s comically phallic violence. Sweet Angeli will drive cylinders out of this still-pristine sandy loam. Well, that’s the cost of progress at this point of human civilization and sprawl.

From a cabin next to a crouching yellow digger emerges a man in an orange vest: SECURITY. I slink aside a step, wondering if I should be staring in from this corner of tattered tarpaulin. Clearly I’m not the first gawper — we love to look inward. Behind me, the steady surf of cars on tarmac, the theme music to LA’s ever-rolling satirical feature: traffic. We’ll need Angeli’s help to end that.

A group of teenagers passes, and a boy hits another behind a girl’s back. Later, an angry man in a white car pulls over, yanks me from my notes with a brusque yell, asks if I’m Chrissie and speeds off when I’m not.

There’s aggression everywhere; you don’t even have to go looking. Angeli will do her work, down there where it’s dark, where humans have feared to be. But here we are, and since we’ve come this far, we’ll make the hole worth it. We’ve learned. We’re learning.

The man in the orange vest finishes his patrol, protecting the underworld, though it’s nobody’s, and it’s everywhere, if we choose. 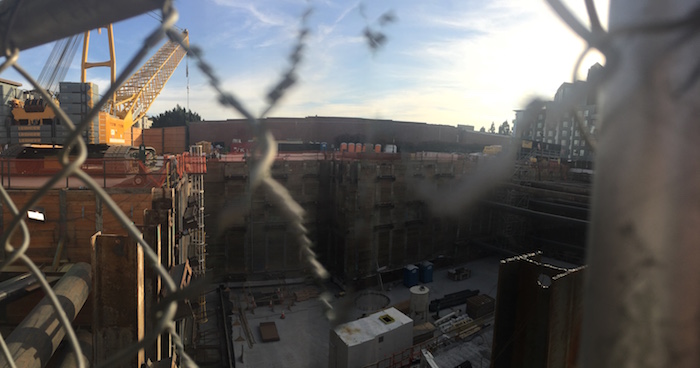