Ten years ago, when I began my research on activism surrounding the history of Japanese military sexual slavery, I asked elderly Korean survivors of wartime sexual violence why they attended weekly protests across from the Japanese Embassy in Seoul. One woman, Gil Won-Ok, explained that it was for the future. As a living witness, she believed that it was her responsibility to tell the world about her experiences and to fight for justice.

The issue of “comfort women” is more urgent than ever before; many of the women impacted have died; survivors are now in their late 80s and 90s. When the Korean government recently announced it would not renegotiate the 2015 agreement with the Japanese government to resolve “finally and irreversibly” this issue, we witnessed again the failings of state efforts at redress.

Now as a professor at Northwestern University, my research has spanned protests and other contemporary performances that promote gender justice. In my book I examine how Korean survivors and their supporters have utilized embodied practices like protests, tribunals, theatre, and memorial-building to reconceptualize an expansive view of redress that is legal, political, social, and cultural. It is time for us to join in stretching the social and cultural horizons of justice even wider.

Gil Won-Ok, born in 1928, was just a teenager in 1940 when she was deceived into sexually serving Japanese troops. The mostly Asian and Dutch so-called “comfort women” endured repeated rapes, physical torture, and verbal abuse. After the war, many journeyed back to their homes, but some, like Gil, were never able to see their families again. For almost five decades, public silence shrouded this history until Korean survivors began coming forward in the 1990s and galvanized the social movement that emerged in South Korea.

The Korean government recently showed signs of questioning the 2015 agreement through a task force that concluded the agreement failed to take into consideration survivors’ wishes. Undoubtedly survivors had hopes of finally receiving the kind of acknowledgment and accountability they desired.

Tim Keller, founding pastor of Redeemer Presbyterian Church in New York, invokes the metaphor of a fabric with its intricate interwovenness as a metaphor for justice. The work of justice is threading and attending to where the fabric unravels. The work of gender justice requires a multi-pronged approach for there are many threads. Not only do states need to be held accountable and future generations need to be taught this history, but we need to think about how to change conditions that make such violence even possible. How do we alter societal views of women’s bodies as being expendable especially during wartime? How do we change the hypermasculine culture of militarism? How do we open our ears to the testimony of rape victims and honor their words?

Activists in South Korea have already paved the way for a multi-pronged approach to justice. They have always advocated for official redress while opening up the possibilities for change, putting energy into well-being programs for survivors, educational campaigns, and memorialization projects. On the one hand, it should not matter that the Japanese government has not offered adequate redress because survivors and their supporters have shown us that justice is not solely in the hands of the state. Yet, an official apology and reparations do matter because those who are responsible must take full legal responsibility, publicly acknowledge their crimes, and foster education and memorialization.

Though the actualization of official redress seems unlikely, we can enlarge the horizons of justice by continuing the work of honoring these women’s experiences, teaching their history, and helping others to respect survivors of gender-based violence. Attending to the fabric of justice necessitates the participation of all of us: support memorialization projects in your city; attend a local protest in solidarity with the survivors; make a donation to the Butterfly Fund, started by Gil Won-Ok and Kim Bok-Dong to support other victims of sexual violence; host a screening of films like Tiffany Hsiung’s award-winning The Apology; create an artistic work inspired by the women’s testimony; and learn about their history. Let’s not underestimate the importance of engaging, standing alongside, and remembering. These are the seeds to transform witnessing into structural change.

The Palestinian-born poet Suheir Hammad writes beautifully of the ongoing reckoning with social and political loss in “ZaatarDiva.” In the poem “sawah,” she concludes her lamentation of lost love with, “we are poets each/ of us travelers between/ history and hope.” She captures how survival entails continual movement between the historical past and hope, of what is desired for the future and of what is yet to come. Like Gil Won-Ok and Kim Bok-Dong, Hammad’s words show the fight for justice is ongoing and that we are all called to join these women in traveling between history and hope. 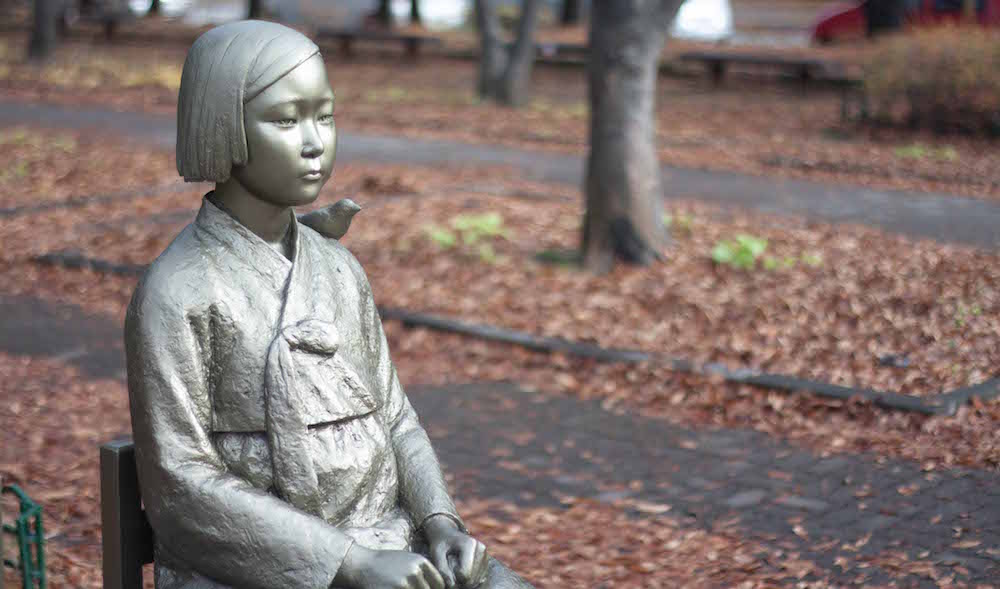